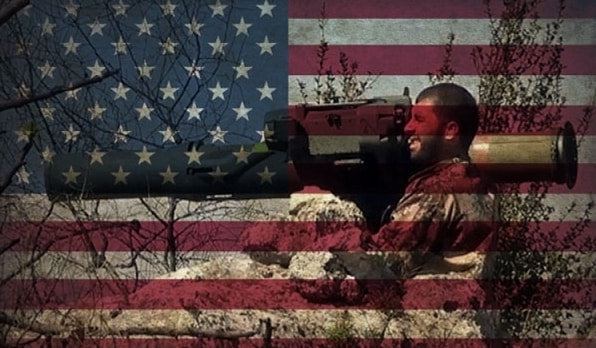 [ Editor’s note:  The same air base that Turkey is now allowing the US to use in the supposed bombing campaign on ISIS, a campaign that has come to a total standstill days after it “began,” is also the source for up to 3000 TOW missiles given to al Nusra, the al Qaeda “franchise” that America’s bombing campaign is supposedly targeting.
The same group that received sarin gas supplies through Turkish safe houses controlled by contractors for an obscure defense contracting firm run by dangerous Neocons called “Google Idea Groups” aided by a Washington based PR firm tied to the Heritage Foundation and Koch Brothers called PJ Media.
Both groups are under investigation for terrorist activities and can be expected to be named in an indictment presented before the International War Crimes Tribunal at The Hague before the end of the year according to ministerial level sources at a key Middle Eastern nation. ]
___________________________
TEHRAN (FNA) – The US and NATO are supplying the militants in Iraq and Syria with weapons and ammunition to fight against the Damascus and Baghdad governments, media reports said.

In March, Qasim al-Araji, the head of the Badr Organization in Iraq, told parliament he had evidence the US has deliberately armed the Islamic Army, according to a report carried by the Arabic language Almasalah. The London-based organization Conflict Armament Research previously reported that ISIL fighters are using “significant quantities” of arms including M16 assault rifles marked “property of the US government.”

In June Aaron Klein, writing for WorldNetDaily, reported that members of ISIL were trained in 2012 by US instructors working at a secret base in Jordan, according to informed Jordanian officials.

General Thomas McInerney told Fox News in September that the US “helped build ISIL” as a result of the group obtaining weapons from the Benghazi consulate in Libya which was attacked by jihadists in September 2012.

“We backed I believe in some cases, some of the wrong people and not in the right part of the Free Syrian Army and that’s a little confusing to people, so I’ve always maintained… that we were backing the wrong types,” McInerney said.

In October, a purported errant airdrop of weapons fell into the hands Islamic State fighters outside Kobani in Syria. In November, Iraqi intelligence sources said the US is actively supplying ISIL with weapons.

“The Iraqi intelligence sources reiterated that the US military planes have airdropped several aid cargoes for ISIL terrorists to help them resist the siege laid by the Iraqi army, security and popular forces,” Iraqi intelligence claimed in December.

“What is important is that the US sends these weapons to only those that cooperate with the Pentagon and this indicates that the US plays a role in arming the ISIL.”

The US claims it is arming “moderate” mercenaries in Syria to fight against ISIL and the al-Assad government in Damascus despite the fact there are no longer any moderate forces active. The CIA has shipped weapons to al-Qaeda affiliated groups in Syria since at least 2012, a report by The New York Times disclosed.

The shipments included more than 160 military cargo flights by Jordanian, Saudi and Qatari military cargo planes landing at Esenboga Airport near Ankara and other Turkish and Jordanian airports. An effort to arm al-Nusra Front, now fully merged with ISIL, and other jihadist groups has been coordinated by American intelligence.

The US does not admit arming and training ISIL terrorists, although General Martin E. Dempsey, the Chairman of the Joint Chiefs of Staff, has admitted in testimony before the Senate Armed Services Committee that United States’ Arab allies in the Middle East fund ISIL.

TEHRAN (FNA) – The Syrian warplanes pounded the strongholds of Al-Nusra Front terrorist group in the province of Lattakia over the last 24 hours, killing tens of terrorists and injuring dozens more. The Syrian army destroyed the vehicles and wireless communication station of the terrorists in Rabi’a and Dweirshan regions.

Several foreign terrorists, including a Saudi named Abu al-Muslimeen, a Pakistani named Saqr al-Aboud and another foreign national Mus’ab Saji were identified among the terrorists killed in Lattakia province.

Also in the past 24 hours, the Syrian army and Hezbollah forces killed several Takfiri terrorist commanders and destroyed an IED (improvised explosive device) manufacturing site in the city of Zabadani in Damascus province.

A number of senior commanders of Jeish al-Islam have also surrendered themselves to the Syrian army in Zabadani. The development came after President Bashar al-Assad in a televised address last month pardoned all soldiers who have fled the army, saying that his words served as a general decree to relevant officials.

Assad said even those who have fought the Syrian army will be pardoned. This was the third general amnesty declared by President Assad in the last four years. Hundreds of gunmen have been laying down their weapons and turning themselves in to authorities in areas across the country.

This number seems to be on the rise as the army has been making steady gains in the battlefield against the terrorist groups, recapturing an increasing number of areas, including strategic sites, which helped cut off many of the militants’ supply routes and forced them to surrender or run away.

Several groups of militants have surrendered to the Syrian army in the Damascus Countryside in the last several months. The last one of such groups gave in to the authorities in the region in mid February.

Terrorists of al-Nusra Front also suffered losses in personnel and equipment during special army operations against their concentration centers in the vicinity of al-Nairab airport in the Southeastern countryside of Aleppo.

Also, militants of the ISIL Takfiri terrorist group abducted 230 civilians, including at least 60 Christians, in a Central Syrian town. The so-called Syrian Observatory for Human Rights said the civilians were taken on Thursday in the town of Al-Qaryatain.

“The ISIL terrorists kidnapped at least 230 people, including at least 60 Christians, during a sweep through Al-Qaryatain,” Observatory chief Rami Abdel Rahman said.

Many of the Christians had fled from Aleppo province, in Syria’s North, to seek refuge in Al-Qaryatain. He said those abducted were wanted by the ISIL for “collaborating with the Damascus government,” and their names were on a list used by the Takfiris as they swept through the town. Families who tried to flee or hide were tracked down and taken by the Takfiris, he said.

Al-Qaryatain lies at the crossroads between a territory controlled by the ISIL in the Eastern countryside of Homs and areas further West in the Qalamoun area. It had a pre-war population of 18,000, including Sunni Muslims and around 2,000 Catholics and Orthodox Christians.

According to a Syrian Christian who lives in Damascus but is originally from Al-Qaryatain, the town’s Christian population has dropped to only 300.

In May, masked men abducted Syrian priest Jacques Mourad from the Syriac Catholic Mar Elian monastery in Al-Qaryatain, near the ISIL-captured ancient city of Palmyra. Mourad, who was known to help both Christians and Muslims, was preparing aid for an influx of refugees from Palmyra.

The sources said that the hideouts of the Nusra fighters were massive bombed by the Syrian fighter jets in the villages of al-Ankawi, al-Hweiz, al-Zaqoum, Tal Zajram, and Hmaimat in the Northwestern parts of Hama province, inflicting heavy losses in personnel and equipment on the militant group.

On Thursday, the sources said that Diqmaq, al-Rahjan, al-Hamediya, Qastoun and al-Bahsa have been the scene of heavy clashes between the Syrian army men and the militants, who left behind several killed members and retreat from the mentioned battlefronts.

TEHRAN (FNA) – The Syrian air raids bombed positions of the foreign-backed Takfiri militants in the Provinces of Idlib and Aleppo, leaving a group of them dead.

The Syrian air raids destroyed terrorists’ hideouts, and killed a large group of them to the North of al-Bahsa, Maaret al-Nouman and Jisr al-Shoghour in the countryside of Idlib. Meanwhile, the air strikes also destroyed vehicles of terrorists in Rasm al-Abboud and Tal Estable in Aleppo.

Syria has been grappling with a deadly crisis since March 2011. The violence fuelled by Takfiri groups has so far claimed the lives of over 230,000 people, according to reports. New figures show that over 76,000 people, including thousands of children, lost their lives in Syria last year.