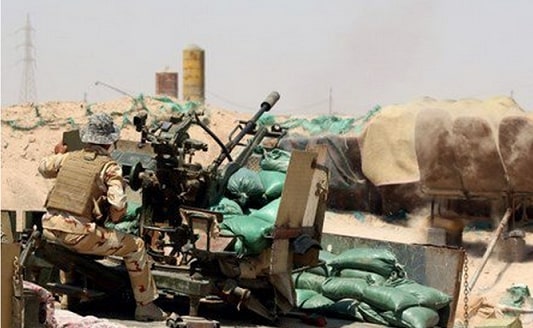 Iraqi PM: Army Chiefs to Stand Trial over Ramadi Withdrawal
Iraqi Prime Minister has approved the decision of an investigative council to refer military commanders to a court martial for abandoning their positions in the battle against Islamic State in Iraq and the Levant (ISIL) terrorists in Ramadi.

Haider al-Abbadi confirmed the decision in a statement on his website on Sunday, Al Jazeera reported.

Al Jazeera’s Mohammed Jamjoom, reporting from Baghdad, said the statement says that all military officials with the rank of officer or above, who left their Ramadi posts without permission, will be court-martialled.

“What is not clear is when those court martials will happen, or if any of those members of the military have already (faced proceedings),” he said.

ISIL seized Anbar province’s capital Ramadi in May, extending its control over the Euphrates valley west of Baghdad and dealing a major setback to Abbadi and the US-backed army he entrusted with its defence.

The fall of Ramadi was widely considered as the Iraqi army’s worst defeat since ISIL swept through north Iraq last June.

Iraqi forces have launched a number of offensives to retake ground in Anbar province since ISIL took over Ramadi, but have so far been largely unsuccessul in recapturing the provincial capital.

Thousands of people have been displaced by the fighting and more than 1,500 schools have been damaged or destroyed as a result of the conflict in Anbar province alone, according to an Iraqi official.

Abbadi launched a sweeping reform campaign last weekaimed at combating corruption and mismanagement in the biggest shake-up in the governing system since the United States’ military occupation.

During Tigris military operation in the eastern province of Salahadin 50 ISIS militants were killed. File photo.

“A force belonging to Division 5 of the Iraqi army defeated a massive assault of ISIS militants on the oilfields of Allas and Ajail and gunned down 50 militants,” read the Iraq Defense Ministry statement. It added that nine vehicles belonging to the extremists were destroyed.

According to an Iraqi security source, ISIS militants had recaptured the area of Albu Jaradian in the town of Baiji in Salahadin, and “they are on the offensive towards the western neighborhoods of Karaba and Naft in Baiji.”

The Baiji setbacks came as Iraqi Defense Minister Khalid Obaidi arrived in the town of Zaluia in Salahadin to mark the establishment of the Zaluia-Balad bridge.

On June 30, Hadi al-Amri, the head of the Badr Organization, said the oilfields of Allas and Ajail had become a graveyard for ISIS militants, and they could not return to the provinces of Diyala and Salahadin ever again.

Coalition Strike Kills Tens of ISIS Terrorists, Including Top Heads in Anbar
A security source in Anbar province said Saturday, that the international coalition aviation has killed dozens of ISIS elements, including a prominent Syrian leader, during an aerial bombardment in west of the province, iraqinews reports.

The source, who spoke on condition of anonymity, informed IraqiNews.com, “Warplanes of the interactional coalition, with coordination with the army forces had bombed two sites for the ISIS organization in the area of al-Dulab, located in the city of Heet (70 km west of Ramadi).”

The source noted, “The aerial bombing resulted in killing dozens of ISIS elements, including the Syrian prominent leader Abu Anas al-Shami, and inflicting big material losses upon them.”

Hezbollah, Syrian Forces Lay Strong Siege on Terrorists in Zabadani
The Syrian army and Lebanese Hezbollah resistance forces cut the defense lines of the terrorists in the town of Zabadani in Southern Syria, surrounding them in a small area of two square kilometers, Al-Alam News Network reports.

According to FNA dispatches, the terrorists of the Al-Nusra Front and Ahrar al-Sham are now under a full siege in Zabadani.

The army units and Hezbollah forces, meantime, purged the terrorists from al-Shalah region.

Also, the Syrian army pounded the terrorists’ positions in al-Nabu and al-Mahta regions.

On Tuesday, the Syrian army and Hezbollah purged terrorists from the Southern parts of Zabadani.

The Syrian and resistance forces pushed the terrorists backed from areas between two main squares in Southern Zabadani.

Tens of Takfiri terrorists were killed and dozens more were injured in heavy clashes with the Syrian troops and Hezbollah fighters.

The strategic town of Zabadani is located 45 kilometers to the Northwest of the city of Damascus in the Southern parts of Al-Qalamoun region.

The Syrian army and Hezbollah fighters started fresh operations to win back Zabadani over two weeks ago.

TEHRAN (FNA)- The Syrian army made a strong drive against the militant groups in Western Ghouta in the countryside of Damascus, killing tens of Takfiri terrorists and injuring dozens more.

The army units inflicted heavy losses on the foreign-backed terrorists in Daraya in Western Ghouta as the Syrian troops intensified their attacks on the militant groups in Damascus.

Tens of terrorists were killed and dozens more injured in heavy clashes with the army in Daraya.

The Syrian army is trying to prevent terrorists’ mortar and missile attacks on the capital Damascus by purging terrorists from Daraya.

In February, the Syrian army restored full security to the international Damascus highway and also took control of the Western Ghouta.

TEHRAN (FNA)- The Syrian army pounded the terrorists’ positions in the countryside of Daraa, and killed tens of militants, including half a dozen commanders over the last 24 hours.

Also in the past 24 hours, the foreign-backed Takfiri militants carried out rockets attacks on several areas in Idlib and Aleppo on Saturday, killing at least 5 civilians.

Terrorists of the so-called “Jeish al-Fath” fired rockets at areas in the countryside of Idlib, and killed a baby girl and her mother and injured 12 other civilians.

Terrorists positioned in the villages of Taaoum and Deir al-Zaghab fired rockets on al-Fouaa and Kefraya village in Idlib, local sources said.

Meantime, media reports said that divisions among Ahrar al-Sham ringleaders and ranking gang members have widened after several senior commanders of the Takfiri terrorist group were killed in a recent suicide attack by the rival ISIL terrorist group.

The ISIL suicide attack that has taken a heavy toll among Ahrar al-Sham commanders has made the rival militant group face a leadership crisis and even stop its military operations in Sahl al-Qab region of Idlib, the Arabic-language Al-Araby al-Jadeed news website reported.

Abu Abdul Rahman Jobas, Mohammad al-Mohammad and Ahmad al-Sharif were among Ahrar al-Sham leaders who were killed in the ISIL’s suicide attack in Idlib countryside

Elsewhere, people in militant-held regions in Damascus and Aleppo countrysides have been out in the streets to shout their protest against the militants.

People continued their protests against the Takfiri terrorists in the Damascus countryside.

Meantime, Takfiri terrorist groups violated their ceasefire with the Syrian army and the Hezbollah troops in the Northwestern parts of Syria once again on Saturday after they fired mortar shells at two towns in Idlib province and killed several civilians.

A 48-hour ceasefire which began at 6 a.m. (03:00 GMT) Wednesday in the city of Zabadani and the towns of Fuaa and Kafraya in Northwestern parts of Syria along the border with Lebanon was extended for another two days on Friday. The truce had been agreed in advance between the Syrian government and Hezbollah forces and militant groups.

Elsewhere, the Syrian Army’s 132nd Brigade of the 5th Armored Division – in coordination with the National Defense Forces (NDF) – launched a counter-assault against the Liwaa Thawar Souriya in the strategic hilltop of Tal Za’tar and retook full control over the area, military sources said.

The sources said that the Syrian army recaptured Tal Za’tar from the rebel group before 4:30 p.m. (Damascus Time) on Friday, forcing the rebels to retreat from the area towards the town of Yadouda in order to evade the aerial assault from the Syrian Air Force.

Tal Za’tar is strategically located to the West of Dara’a City; its proximity to the provincial capital’s Western suburbs makes it an imperative military endeavor for the rebel forces that are attempting to besiege the city of Dara’a from three different flanks (West, South, and East).

Inside Dara’a City, clashes between the 132nd Brigade of the Syrian army and the so-called Free Syrian Army’s “Southern Front Brigades” were reported at the Al-Manishiyah-Dara’a Al-Balad axis; however, there was no change in the ground situation as a result.