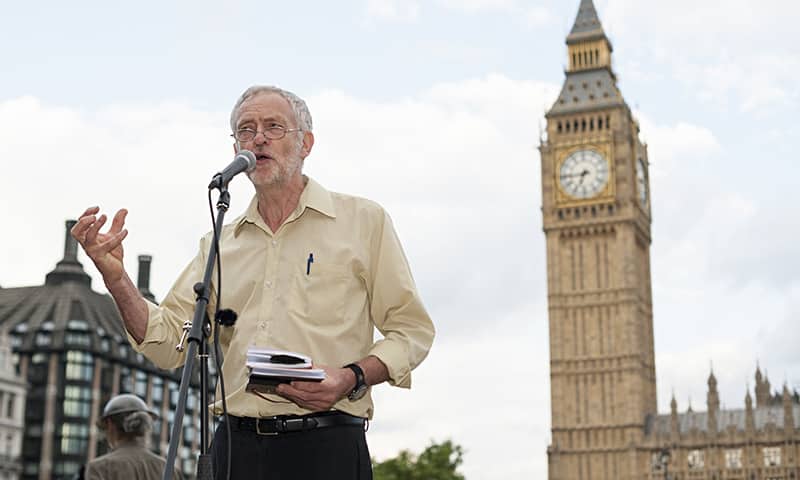 They are now throwing everything they can at Jeremy Corbyn and even trying to discredit him with ridiculous anti-semitism slurs.

His political opponents in the UK Labour Party leadership campaign, including much of the media, have been digging for dirt and questioning his past connections with individuals who hold dubious views — such as Raed Salah (preacher for Islamic Movement, an Israel-based political group with roots in the Muslim Brotherhood), Paul Eisen (blogger, organiser of Deir Yassin Remembered and an alleged holocaust denier), and Abou Jahjah (a founder of the Arab European League).

We’ve heard warmonger Tony Blair spouting. And the other day we had to endure a lecture from former Labour prime minister Gordon Brown. Corbyn had come under fire for referring to Hamas and Hezbollah as “friends” but justified this by explaining that “you don’t achieve progress by only talking to people you agree with”. Brown didn’t criticise him by name but attacked obliquely: “I have to say that if our global alliances are going to be alliances with Hezbollah and Hamas and Hugo Chavez’s Venezuela and Vladimir Putin’s Russia, there is absolutely no chance of building a world-wide alliance that can deal with poverty and inequality and climate change and financial instability, and we’ve got to face up to that fact.”

Okay, let’s all play this game of reaching into the past. In 2008 Gordon Brown, in the first speech by a British prime minister to the Israeli parliament, the Knesset, told Israeli MPs: “Britain is your true friend. A friend in difficult times as well as in good times, a friend who will stand beside you whenever your peace, your stability and your existence are under threat.”

Brown took the opportunity to attack Mahmoud Ahmadinejad, the Iranian president. “To those who question Israel’s right to exist, and threaten the lives of its citizens through terror, we say: the people of Israel have a right to live here, to live freely and to live in security. And to those who believe that threatening statements fall upon indifferent ears, we say in one voice that it is totally abhorrent for the president of Iran to call for Israel to be wiped from the map of the world.” As we all know, Ahmadinejad made no such remark. He quoted the late Ayatollah Khomeini as saying that “this regime occupying Jerusalem must vanish from the page of time”, a proposition that many people agree with. But Brown’s PR machine twisted it to conform with Israeli propaganda.

In July 2008 I expressed my disgust in an article ‘The speech Gordon Brown should have made to the Israeli parliament’. Here are extracts…

Britain, like the US, has an uncanny knack of producing one silly leader after another from a limitless supply that thrust themselves on an unsuspecting public in order to perpetuate the Great Betrayal and the Nakba (Catastrophe). Brown is the latest high-flier from our political swamp. Judging by his performance so far, we Britons are destined to live our lives in a state of perpetual and excruciating embarrassment.

Let it be known that this prime minister doesn’t speak for me or anyone I know when he says: “Britain will always stand firmly by Israel’s side.” And nobody of my acquaintance would ever sign up to “an unbreakable partnership based on shared values of liberty, democracy and justice” with Israel. It is quite obvious that none of our values of liberty, democracy and justice is practised by that regime….

“I think of David Ben-Gurion,” blurted Brown, “who from humble beginnings in Poland built up the Jewish national institutions and in 1948 said it was not enough for the Jewish state simply to be Jewish, it had to be fully democratic offering equal citizenship to all residents: a democracy not just of one people but of all your peoples…”

Mentioning Ben-Gurion in the same breath as democracy and equality is not a good idea. This is the same guy who said: “I support compulsory transfer [i.e. ethnic cleansing]. I don’t see anything immoral in it.”

On another occasion Ben Gurion admitted: “If I were an Arab leader I would never make terms with Israel… We have taken their country. Sure, God promised it to us, but what does that matter to them? Our God is not theirs. We come from Israel, it is true, but 2,000 years ago, and what is that to them? There has been anti-Semitism, the Nazis, Hitler, Auschwitz, but was that their fault? They only see one thing: we have come here and stolen their country.”

Brown even praised Menachem Begin but was careful not to mention the Irgun. It was Begin’s terror gang, the Irgun, that declared war on the British mandate government while Britain was still fighting Nazi Germany. And our prime minister must have forgotten that in 1946 the Irgun under Begin’s leadership blew up the British headquarters in Jerusalem’s King David Hotel, killing 91.

How dare this grey suit use our good name to offer such brazenly partisan approval to a territorial hijack that daily brings misery, disaster and cruel injustice to those who are crammed into the impoverished remnants – the crumbs – of what used to be their Palestine homeland. Fortunately, Brown’s days are numbered. Unfortunately, another “I’m-a-Zionist” nutter is waiting in the wings.

Unlike Corbyn, Gordon Brown wouldn’t talk to Hamas because warmongers in the White House had branded them ‘terrorists’. But that’s their opinion. The state of Israel was founded by terror groups like the one that murdered 91 in an attack on the British mandate government in the King David Hotel and carried out the Deir Yassin massacre. Israel is the real McCoy terrorwise. As Norman Finkelstein has remarked, “It is more than a rogue state. It is a lunatic state… The whole world is yearning for peace, and Israel is constantly yearning for war.”

The Israeli government itself was described by one of Brown’s own (Jewish) MPs as a ‘gang of amoral thugs’.

And Mr Brown, the son of a Church of Scotland minister, would have done well (as would all the other critics of Jeremy Corbyn) to mull over the words of Gaza’s priest, Father Manuel Musallam, who told my journalist friend Mohammed Omer: “Palestinian Christians are not a religious community set apart in some corner. We are part of the Palestinian people. Our relationship with Hamas is as people of one nation. Hamas doesn’t fight religious groups. Its fight is against the Israeli occupation.”

When asked about Western media reports that Islamic oppression was forcing Gaza’s Christians to consider emigrating, Father Manuel said that if Christians emigrate it’s because of the Israeli siege, not the Muslims. “We seek a life of freedom—a life different from the life of dogs we are currently forced to live.”

I suspect the British public are growing tired of the whining accusations of anti-semitism every time someone voices criticism of Israel. The baying hounds of the media and the political Establisment are entitled to question Jeremy Corbyn’s past associations, as long as they also ask Corbyn’s leadership rivals if they’ve shared platforms with friends and promoters of the Israeli terror regime, or sheltered its war criminals. They should also ask if any of them has voiced objection to Netanyahu’s visit to London next month or signed the petition demanding his arrest. And if not, why not? Are they enemies of international law and justice?

The Conservative Party had better not be too critical of Corbyn either. Eighty percent of Tory MPs and MEPs are reported to be signed-up Friends of the rogue regime and it was the Conservative-led coalition that shirked Britain’s solemn obligations under the Geneva Conventions and weakened our Universal Jurisdiction laws specifically to enable Israel’s senior thugs to come and go in the UK without fear of arrest.