Home WarZone Believe None of It, Boxcutter Trainride in France 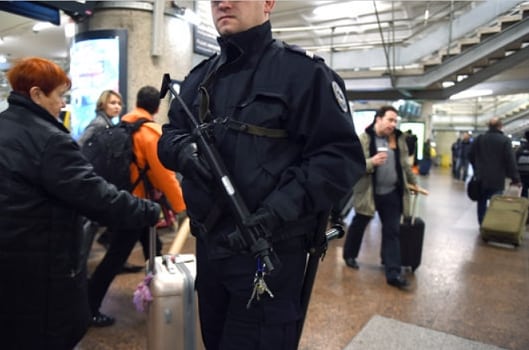 [ Editor’s note:  We now know our “culprit” was on a watch list and under surveillance when he got on the train.  There is no doubt of this at all.  From that we can assume, with a high degree of confidence, that his weapons were supplied by an intelligence agency with the full cooperation of the government of France.

What wasn’t supposed to happen is Americans beating the patsy half to death, something no Frenchman would ever do, not even to steal a seat from a cripple on a crowded bus.  We also know that French intelligence was fully aware of the involvement of Turkish intelligence in the “suspect’s” (we now call him a “suspect”) travel to Turkish occupied Syria where our “suspect” met with al Qaeda, the CIA organization chosen by John McCain to conquer Damascus. ]

It’s like Charlie Hebdo all over again, no, not a “national tragedy,” but a comic farce.  With Hebdo it was the shoeless dancing terrorist firing blanks into the sidewalk.  No amount of hand wringing or proselytizing by Netanyahu can cover the stench of a false flag terror attack.

First off, we want to thank the Americans onboard for being American and smashing the daylights out of the pipsqueak terror shill like what really would have happened on 9/11 if there were hijackers.  There weren’t, end of story.  By the time an American, and nearly 40% of Americans on commercial aircraft are veterans, gets on a plane, after dealing even with pre-9/11 airline monstrosity, anyone who “crosses the line” has taken their lives into their hands.

Like many, perhaps most vets, I dream of the opportunity of disarming and pummeling people on airplanes.  My only worry is that I would have to get in line to do it.   Truth be told, most Americans hate airline executives, the ones who push for smaller and smaller seats, more than any terrorist.  Terrorists do less harm.

This time, our terrorist, crying to get his gun back while an American pounds him into sublime unconsciousness, the screw up was so easy to spot.  Today we are told he traveled from France to Syria and back.  How does France know he was in Syria?  This is the first HUGE mistake.

You see, you can’t fly to Syria from anywhere.  Last time I was there I drove in with Franklin Lamb and back out with Hezbollah.  Both times I was handed an AK47 when I got in the car.

What the French are lying about is where this young man, his name is still withheld, perhaps while his family and fellow terrorists are being sequestered by intelligence agents, actually flew to.  You see, most terrorists, as pointed out by the Pentagon this week, fly to Turkey and are escorted into Syria by Turkish intelligence, to training camps.

If France knew the “terrorist” crossed into Syria then they knew, for certain, they were dealing with a terrorist and would never have allowed him to return, unless it was for some reason, such as to help stage a false flag terror attack on a train.

You just don’t get onto a train in Belgium or France carrying an AK47 assault rifle, 9 magazines, a semi-automatic pistol and a silly boxcutter.  The boxcutter gives it all up, this is insane.

You see, in France, you can buy an “automatic” or “assisted opening” knife anywhere.  French carry huge knives.  I have bought several in France including a 5 inch Boker in a drug store.  You need them to cut and trim the garlic-peppercorn sausage which is all there is to eat in France.  In fact, you might be able to sharpen a dried sausage into a fine weapon, certainly more dangerous than a box cutter.

France makes some of the finest knives in the world, they are sold everywhere.  I am sure I could get onto a train with a 9 inch Sabatier 5 Star chef’s knife, in France that would certainly be allowed, Belgium too.

You see, in Europe terror bombings are all the rage.  Picture a young Moroccan terrorist carrying a large bag.  His folded AK47 with 30 round magazine is 26 inches long and weighs nearly 10 pounds.  Along with the pistol, magazines and ammo, you have 25 pounds of rattling metal and the unmistakable profile of a full sized assault rifle.  There are smaller AK variants, this is not one of them, this is the big guy.

Remember when Jason Bourne, when in Switzerland, had to go to a safe deposit box in a private bank to get a pistol?  In the film, Taken, Liam Neeson had a pistol but never an AK47.  The lesson here is that there are NO AK47 rifles floating around France just like there are no Ruger Mini-14 rifles floating around Norway, such as the one used to kill 80 students on a day police helicopters and all fishing boats were “unavailable” other than to reporters.

Then again, we could talk about how you put 3 tons of explosive in an Opel Corsa, but that answer is easy.  One ton in the passenger seat, one in the back seat and another in the luggage compartment, the same way you get 4 elephants into a Volkswagen Beetle.

So, within hours, we have a terrorist that couldn’t exist, who France knew got to Syria in a truck run by an NGO refugee organization tied to Turkish intelligence.  You know, when refugees wait for years to get to France, and others drown crossing the Mediterranean, how did this young man simply fly into Paris, walk through customs, pick up 25 pounds of unavailable weapons, pass endless police checkpoints, get on a train and to the “Allah Akbar” thing, only to be pounded by the first American that could get to him?

What can we assume?  We can assume that this is the same organization that did the “Charlie” fiasco.  We can assume full complicity of the French government and President Hollande, who is now going to have to decorate the Americans who interfered with the plan.

Is France’s new cozy relationship with Iran the reason for this attack?  If so, with Britain reopening their embassy there, what can they expect? This one fell apart in hours.