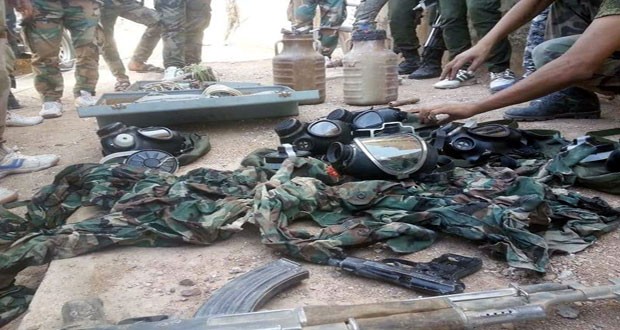 Hasaka – When popular defense groups aided by Kurdish YPG fighters began an extensive search of ISIS/al Nusra facilities inside Hasaka City, they made some startling discoveries.  In tunnels beneath the offices of the Syrian Human Rights Observatory, the London backed reputed CIA front responsible for the 2012 and 2013 accusations against the Damascus government for using Sarin gas, gas masks and weapons were recovered.

The discredited group that had pushed for US air attacks on Damascus may well have been doing more than simple observing.

All reports of “barrel bombing” and gas attacks by the Damascus government have originated from this organizations whose “observers” are embedded with al Qaeda and ISIS forces.  Members of the group have been recruited from news organizations such as the Jerusalem Post and Times of Israel and regularly seed staged photos through Reuters into the media on behalf of terrorist groups.

The SHRO had fled Hasaka city earlier this month to avoid capture by Kurdish forces who overran the ISIS stronghold, site of recent gas attacks on Syrian Kurdish villages in the region.

Popular defense groups in Hasaka city seized on Friday gas masks which ISIS members left behind when they escaped from the city earlier this month, few days after publishing reports that confirm the use of toxic weapons inside Syria by the terrorist organization. A source in Hasaka province told SANA reporter that popular defense groups had discovered a tunnel in Gweiran Sharqi neighborhood with a number of gas masks and two explosive devices inside it, each one weighing 150 kg, and amounts of weapons and ammunition.

International investigators and ammunition experts had affirmed in a report published by New York Times newspaper in mid-August that ISIS launched two attacks with chemical weapons in Tal Barak and Hasaka.

Recent reports from Georgia of WMD deliveries transhipped through Ukraine in trucks owned by British Petroleum and Bechtel Corporation are tied to the increase in chemical weapons use in Syria.

When the banned weapons reach Georgia, they are turned over to BP and Bechtel, who use Turkish drivers to transit them to Syria.