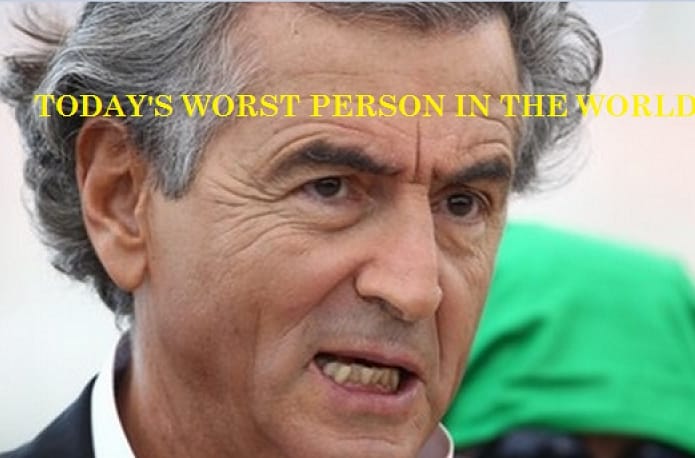 Levy, whose bad haircut is as dated as his dull edged prose, again takes to the “disinformation highway”
By Gordon Duff, Senior Editor
This morning the world was hit with a bizarre propaganda piece from Bernard Henry Levy.  Levy lambastes Obama and Kerry for not nuking Syria because of the “red line.”  What Levy is referring to is the Mossad plot to plant transmitters inside “rocks” in Syria used to broadcast pre-recorded Israeli messages used to accuse Assad of using Sarin gas against his own people.
What Levy has actually done with this careless and “ham handed” diatribe is, once and for all, name Israel as responsible for not only the cover and deception operation against Syria, one Kerry and Obama learned of in time, but moreover that Israel was responsible for Sarin gas attacks that killed thousands of Syrian civilians.
Levy is screaming “We did it,” by “we” meaning his real nationality, that being Israeli, not French.
There would be no reason for a deception plan using “rock transmitters” nor would there be reason to try to rehash a plot long turned back on Israel, Levy of course assuming everyone is as stupid as he is, unless Israel were involved in the murders as well.
We know of the rocks, planted by  Israeli commandos, because the rocks were found, the commandos were found, the submarine they landed with was found too.  From Max Keiser Report, confirmed by Syria News and Veterans Today:

Did Syria Sink An Israeli Submarine?

A story out of Syria claiming it sunk a German built nuclear armed submarine operated by the government of Israel has not only been partially confirmed, but that a fully confirmed nuclear attack on Syria is now believed to have been Israeli retaliation for that sinking.

It is reported that the Israeli Dolphin submarine, a German built diesel/electric craft, was attacked and sunk by a Syrian Navy torpedo boat at 2:30 AM, May 2, 2013 while at a depth of 150 meters. Prior to the sinking, a ship operated by Germany’s intelligence services had been in the area.

After the reported, or should we say “unreported” sinking of the Israeli submarine and the equally “unreported” nuclear attack on Syria, a large contingent of Russian naval vessels moved into area.

There is reason to react with disgust to the vile peddling of conspiracy theory and outright lies by what we have long learned to call the “Mossadist Philosopher.”  The article below showed up in the Huffington Post this morning.  There is nothing that reflects talent or knowledge in this missive, far from it.
It doesn’t translate well into English because it is equally inane in French.  Levy is simply trying to sell the old “barrel bombs and poison gas” scenario we get from the CIA-Mossad affiliated “Syrian Human Rights Observatory” that operates so freely with ISIS and al Qaeda, almost as though they were brothers.
For those unable to get into the drivel below, I have taken the punchline, the real joke behind Levy, another joke, not so funny it seems, like “Jerry Lewis from hell,” and have laid it out:

“Much narrower than on that Saturday in August 2013, before the Islamic State existed, when the moderate Syrian opposition was still strong enough to be a possible alternative to the gathering disorder, and when Barack Obama’s bewildering about-face stopped dead in its tracks the military operation that was to be launched after Bashar al-Assad blithely crossed the famous “red line” defined by the use of chemical weapons. That operation, had it gone forward, would have saved many lives and avoided untold suffering.”

Let’s see where Levy’s lies go in just this one paragraph and he writes paragraphs like it all the time.  I wonder if anyone takes him seriously outside Tel Aviv?

Here it is, today’s attempt to burn the world down:

The West’s Twin Enemies: ISIS and Assad
Bernard Henry Levy, self proclaimed intellectual and philosopher but something else too

The decision announced Monday by French president François Hollande to conduct reconnaissance flights in support of strikes against the Islamic State within Syrian territory is a sensible one.

We cannot continue indefinitely to strike at jihadists in Iraq while stopping, absurdly, at the border of the neighboring state.

We cannot pretend to wage war against these barbarians without borders while avoiding their command centers and logistical bases (let alone the camps where they recruit and train decapitators to be sent abroad, notably to Europe), nearly all of which are located on the other side of the now meaningless border that formerly separated the two Baathist states.

Above all, the French president’s decision removes a suspicion that could not fail to nag at anyone seeing–as I myself did last week when traveling a segment of the extended front along which the Kurds of Iraq are standing up to barbarity–such a large coalition of armed forces stalled at the gates of the territory held by the Islamic State.

A French legislator voiced that suspicion last week when he wondered out loud, to universal astonishment, whether the existence of that murderous entity was not, ultimately, a “stabilizing element” in the region.

The idea was abhorrent.

But it echoed an argument that one had been hearing, though in more measured terms, on the lips of not a few supposed “antiterrorism experts.”

The essence of the argument was this: That we would be better off with a well-contained, closed fundamentalist state surrounded by armies that kept it from expanding any further.

Which amounted to accepting a sort of reservation or recycling center for jihadists–with the assumption that this would be preferable to eradicating the cancer at its source but allowing it to metastasize throughout the region and beyond.

Well, that impoverished argument is now a dead letter.

And the great merit of the current strategic turn is that it frees us from an ambiguity the victims of which have been the tortured Christians, the Yezidis forced into slavery or massacred, and the hundreds of thousands of Sunnis who reject this dark order and whose exodus to Turkey, Lebanon, Jordan, and, increasingly, Europe is–this cannot be said often enough–the direct result, not of misguided western wars that have destabilized the Middle East, as the populist propagandists and their ilk never tire of telling us, but rather of our non-war, of our nonintervention, and of the mad head-in-the-sand policy under which, for more than four years, the western powers, the Turks, and the Arab world have left to fester a situation that could only lead to the worst possible outcome for all of us.

That said, the change of direction signified by Hollande’s decision will have full meaning and effect only if it is accompanied by three corollaries. I am sure that the French president is keenly aware of those corollaries, but he will have to convince his coalition partners of their value–and soon.

The first condition, which, though obvious, will not be the easiest to put into effect, concerns the civilian populations that the Islamic State uses, no less in Syria than in Iraq, as human shields. Every effort must be made to spare them and to avoid prolonging or amplifying their nightmare.

The second concerns the Kurds, who are, in both Iraq and Syria, the only force valiant enough to have stood up to the soldiers of the caliphate, whose mediocre military performance I have described elsewhere (Wall Street Journal, September 3). They are the reluctant boots on the ground, without which air strikes (it is quite true) will never be sufficient. They are there, from Kirkuk to Kobani, freedom fighters who are our natural allies in a battle that we finally seem to be taking seriously. But we must equip them, and keep equipping them, with the means they need, all of the means, to help us defend the values of civilization and, indeed, of life itself.

And there is a third condition, perhaps the most important, one that President Hollande was right to emphasize. And that is to do everything possible to avoid the impression that strikes against the Islamic State should appear in any way as an endorsement, however passive, of a Syrian regime about which we must never forget these things: (i) that it has on its conscience the minor detail of 260,000 deaths and 3 million refugees; (ii) that, as a consequence, it is overwhelmingly responsible for the predicament of the tens of thousands of families streaming in ever greater numbers toward the cities of Europe; and (iii) that it can never be, officially or objectively, even at arm’s length, an ally in the struggle against a jihadist force that it has cynically encouraged, reinforced with psychopaths released from the prisons of Damascus, and spared whenever it was aiming its guns at democratic and secular adversaries.

The path is a narrow one–that much is clear.

Much narrower than on that Saturday in August 2013, before the Islamic State existed, when the moderate Syrian opposition was still strong enough to be a possible alternative to the gathering disorder, and when Barack Obama’s bewildering about-face stopped dead in its tracks the military operation that was to be launched after Bashar al-Assad blithely crossed the famous “red line” defined by the use of chemical weapons. That operation, had it gone forward, would have saved many lives and avoided untold suffering.

But the narrow path before us is the only path.

And France will do herself proud by showing the way.

Translated by Steven B. Kennedy