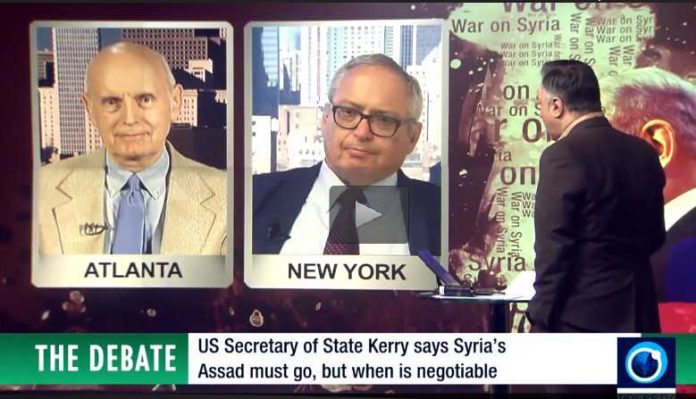 Syria’s political landscape has changed. Russia has increased its military presence in a show of support for the Syrian President Bashar al-Assad, with the stated aim of getting rid of Daesh terrorists.

In this edition of The Debate, Press TV has conducted an interview with Jim W. Dean, the managing editor of Veterans Today from Atlanta, and Peter Sinnott, an independent researcher from New York, about the latest developments in Syria.

The embed link on The Debate Show is not working, but you can see it here.

[ Note:  I Googled my fellow guest on the show, who appeared to be a long time Eurasian academic from New England with a typical resume, Phd. in geography, the first person whom I have run into with one of those. He had taught some courses at Columbia and seems to have specialized in some of the former Soviet states in the Caucasus region.

But once we cranked up and he went into “Russian aggression in Ukraine”, “taking over Crimea”, and “Assad only controls 15% of Syria”, I knew I had a guy who was being funded by you know who, as he was a propaganda machine.

Rather than responding to his fantasy statements, I decided to stick to getting my talking points out, and not being distracted. I had a tickle in my throat, one that has been on and off for several weeks now, so staying on message was the word for the day. I like the Debate shows, as you have more time to dig into a topic — time that has to be used to its fullest

Analysts hate to do short-clips shows all the time. One of my joys of Public TV in Atlanta was their letting me do two shows — a bi-weekly Dixie Rising on Southern heritage issues, and then a one-hour Jim Dean Journal, a Charlie Rose knock off show. At first they said no, I could not have two shows. But I countered that two bi-weekly shows took no more time than those who had weekly shows, and they finally agreed.

So I was able to do 100 shows the first two years, which is how I stumbled into the business and learned it simply by doing. I had a good crew, and we did some of the best work that had been done there, and lots of controversy. Little did I know then that it was all training for VT down the road… JD ]