Home World Violence instead of democracy: Putin slams ‘policies of exceptionalism and impunity’ in... 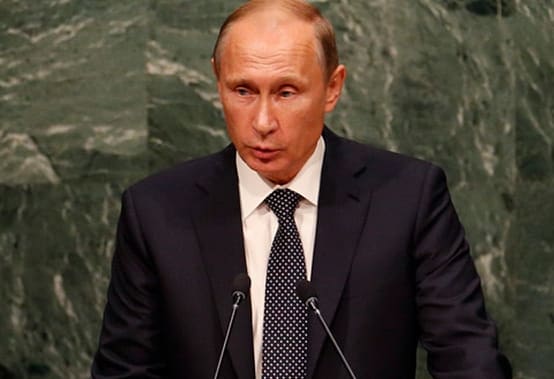 Russian President Vladimir Putin addresses attendees during the 70th session of the United Nations General Assembly at the U.N. Headquarters in New York, September 28, 2015. © Mike Segar / Reuters
19.4K1.6K40
The export of so-called ‘democratic’ revolutions has continued, but has unleashed poverty and violence instead of the triumph of democracy, Russian President Vladimir Putin said addressing the UN General Assembly.
TrendsUNGA70

Attempts to push for changes in other countries based on ideological preferences have led to “tragic consequences and degradation rather than progress,” said Putin in his speech to world leaders and policy makers gathered at the UN General Assembly’s anniversary 70th session in New York on Monday.

“We should all remember what our past has taught us,” Putin said. “We, for instance, remember examples from the history of the Soviet Union.”

It seems however that some are not learning from others’ mistakes, but keep repeating them, he said, adding that “the export of so-called ‘democratic’ revolutions continues.”

“I cannot help asking those who have caused this situation: Do you realize now what you have done?” he asked. “But I am afraid the question will hang in the air, because policies based on self-confidence and belief in one’s exceptionality and impunity have never been abandoned.”

He cited the example of revolutions in the Middle East and Northern Africa, where people have wished for change. However, instead of reforms and the triumph of democracy and progress “we’ve got violence, poverty and social disaster, and human rights, including the right to life, to which no weight is given.”

“Rather than bringing about reforms, aggressive foreign interference has resulted in the brazen destruction of national institutions and the lifestyle itself,” he said.

#Putin to #UNGA: We want to coordinate a group to fight #ISIS & terror through the UNhttp://t.co/wdTm78euxBpic.twitter.com/AdT8ZjonbJ

A single center of domination emerged in the world after the Cold War era ended, Putin stated. Those who were at the“top of this pyramid” were tempted to think that “if they were so strong and exceptional, they knew what to do better than others.”

“Therefore they do not have to reckon with the UN, which instead of automatically authorizing, legitimizing the necessary decisions often creates obstacles or in other words ‘stands in the way’.”

Russia believes that attempts to undermine the authority and legitimacy of the United Nations are “extremely dangerous”and could lead to the collapse of the entire system of international relations, the Russian President said. Speaking to the world leaders and policymakers gathered before him, he urged for unity in the further development of the UN.

‘Stop playing games with terrorists, join under UN against ISIS’

Power vacuums in the Middle East or regions of North Africa have led to the emergence of lawless areas which immediately started to be filled with extremists and terrorists, Putin said.

Islamic State militants (IS, formerly ISIS/ISIL), who gained a foothold in Iraq and Syria, are now seeking to dominate the whole of the Islamic world, he said.

“[Islamic State] ranks include former Iraqi servicemen who were thrown onto the street after the invasion of Iraq in 2003. Many recruits also come from Libya – a country whose statehood has been destroyed as a result of gross violations of UNSC resolution 1973.”

Some of the extremists have defected from the ‘moderate’ opposition in Syria, which has been supported by some Western states, he stressed.

“First, they are armed and trained and then they defect to the so-called Islamic State. Besides, the Islamic State did not just come from nowhere. It was also initially forged as a tool against undesirable secular regimes,” he explained.

He described it as “hypocritical and irresponsible” to turn a blind eye to the channels through which terrorists are financed while making declarations about their threat to the whole world.

“We believe that any attempts to play games with terrorists, let alone arm them, is not only short-sighted, but ‘fire hazardous.’ This may result in a global terrorist threat increasing dramatically and engulfing new regions of the world,” he said.

IS trains militants from many nations, including Europe, and Russia is not an exception, he said. Putin urged for cooperation with Syrian government forces fighting terrorists on the ground.

“We think it is an enormous mistake to refuse to cooperate with the Syrian government and its armed forces who are valiantly fighting terrorism face to face,” he said.

“We should finally acknowledge that no one but President Assad’s armed forces and Kurdish militia are truly fighting Islamic State and other terrorist organizations in Syria,” he added.

Russia has been providing military-technical assistance to Iraq, Syria and other states who lead the fight against terrorism in the region, he noted.

Putin proposed the joining of efforts and the creation of a broad international coalition against terrorism. He proposed discussions at the UNSC about a resolution aimed at coordinating forces to confront IS and other terrorist organizations, based on the principles of the UN Charter.

‘Final solution to refugee crisis is recovery of Middle East’

If a comprehensive strategy of political and economic stabilization of crisis-struck countries is developed, then there will be a hope of tackling the problem of the refugee crisis, Putin stated.

“The flow of people who were forced to leave their homeland has literally flooded the neighboring countries and then Europe,”he said calling it a “new painful migration of peoples.”

He stressed that the fundamental solution to the refugee crisis is rooted in restoring statehood where it has been destroyed, strengthening government institutions where they are weak and providing comprehensive assistance to the peoples’ countries of origin.

Cold War thinking and the desire to explore new geopolitical areas are still present among some in the international community, said Putin.

“First they continued their policy of expanding NATO,” he said. Following the collapse of the Soviet Union, “they offered post-Soviet countries a false choice – either to be with the West or with the East. Sooner or later the logic of confrontation was bound to spark off a grave geopolitical crisis. This is exactly what happened in Ukraine where the discontent of the population with the current authorities was used and a military coup was orchestrated from the outside that triggered civil war as a result.”

Putin once again called for the full implementation of the Minsk accords brokered by the Normandy Four in February. He said that the accords will guarantee Ukraine’s development “as a civilized state.”

“Ukraine’s territorial integrity cannot be ensured by threats and the force of arms. What is needed is the genuine consideration of the interests and rights of people in the Donbass region, [and] respect for their choice.”