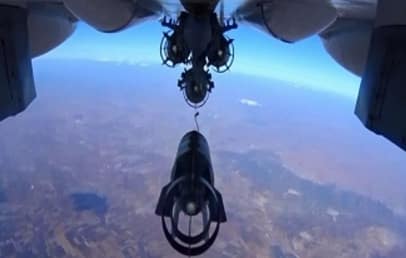 This territory has never been in the hands of the Islamic State, deputy chief of the Russian General Staff Andrey Kartapolov points out

[ Editor’s note:  During the Vietnam War, the US Air Force would fly missions out of DaNang, dozens each day, taking off with a full bomb load and either dropping it at the end of the runway, that famous area that looks like the moon, or dumping napalm on side of Charlie Ridge, a nearby hill.
Thousands of missions were faked, medals given, great successes claimed.  I was stuck there in the mountains, looking down on DaNang, watching the planes in the distance, take off, bomb and land, over and over all day long, playing that game.
We seem to be doing the same thing in Syria and Iraq, anything not to risk harming our CIA and Mossad fed partners, ISIS, al Nusra, the FSA and others.  The game worked until Russian satellites and drones figured it out... Gordon ]
____________ 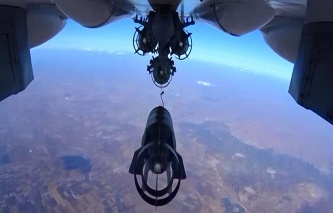 MOSCOW, October 16. /TASS/. Traces of airstrikes against household buildings have been found at the Syria-Jordan border, where Russian warplanes have performed no missions, deputy chief of the Russian General Staff Andrey Kartapolov said on Friday.

“We have spotted ruins of household buildings destroyed by bombing near the settlement of Kherbet Ghazala at the Syrian-Jordan border,” he told a briefing for foreign military attaches and journalists.

“Russian warplanes have never performed any missions there and, as far as we know, the Syrian aviation has not been used there either,” he stressed. “This territory has never been in the hands of the Islamic State. Moreover, this area has been controlled by the Free Syrian Army since 2013.”

“Why destroy these buildings? It looks like somebody’s pilots were just training their skills or dropped bombs to report to their command about completed mission,” Kartapolov said.

Airstrikes of US-led coalition on civilian facilities on the Syrian territory lead to increasing refugee flows to the European Union, Kartapolov went on to say.

“Over the last two weeks, we have provided enough video materials confirming the precision of [Russian] airstrikes. Our jets deliver airstrikes at facilities located outside of settlements,” Kartapolov said.

“It is not in our rules to advise colleagues on where to deliver their airstrikes. However, on October 11, near the settlement of Tel-Alam, the coalition’s jets destroyed by airstrikes a thermal power plant and transformer substation,” he added. As a result, hospitals and schools in Aleppo were left without electricity. Water pumping stations and sewage also stopped working which can be very harmful in the conditions of high temperatures.

“I think that it is unlikely that our partners did not know that the thermal power plant worked only eight hours per day. Airstrikes were delivered for several days, and on October 11, the power station was completely destroyed. One might get an impression that someone is deliberately destroying infrastructure in settlements, thus making the life of local population impossible. Because of that, civilians leave these settlements after losing living conditions and increase the refugee flow to Europe,” Kartapolov noted.