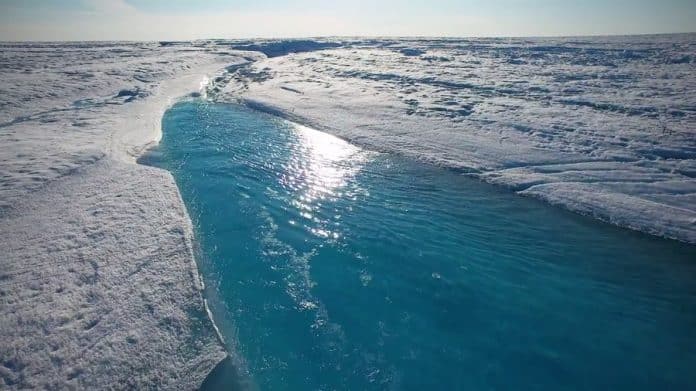 For years, scientists have studied the impact of global warming on the Greenland Ice sheets but now on the ground researchers are documenting the full impact of the melting of Greenland’s ice sheet, one of the biggest and fastest-melting chunks of ice on Earth ~ which could eventually increase sea levels by about 20 feet as well as permanently alter the Gulf stream and effectively freeze Europe: Allen L Roland, PhD

The ice sheet is porous, like Swiss cheese,” Dr. Smith said. “We didn’t know that until this year.”

This summer in Greenland, these scientists set up their camp on the ice, where they hoped to capture the first comprehensive measurements of the rate of melting. See New York Times Interactive article ~

Leap forward 10 years and the prospect of such calamitous tipping points in the North Atlantic or elsewhere no longer seem improbable. In fact, climate scientists have begun to note early indicators of possible catastrophes ~ such as altering the North Atlantic current and effecting the global conveyor belt.

Michael T Klare, Truthout explains this potential tipping point on October 28th, 2015  “Take the disruption of the North Atlantic Current, the pivotal event in The Day After Tomorrow. Essentially an extension of the Gulf Stream, that deep-sea current carries relatively warm salty water from the South Atlantic and the Caribbean to the northern reaches of the Atlantic. In the process, it helps keep Europe warmer than it would otherwise be. Once its salty water flows into sub-Arctic areas carried by this prolific stream, it gets colder and heavier, sinks to lower depths, and starts a return trip to warmer climes in the south where the whole process begins again.

So long as this “global conveyor belt” – known to scientists as the Atlantic Meridional Overturning Circulation, or AMOC – keeps functioning, the Gulf Stream will also continue to bring warmer waters to the eastern United States and Europe. Should it be disrupted, however, the whole system might break down, in which case the Euro-Atlantic climate could turn colder and more storm-prone. Such a disruption might occur if the vast Greenland ice sheet melts in a significant way, as indeed is already beginning to happen today, pouring large quantities of salt-free fresh water into the Atlantic Ocean. Because of its lighter weight, this newly introduced water will remain close to the surface, preventing the submergence of salty water from the south and so effectively shutting down the conveyor belt. Indeed, exactly this process now seems to be underway.“

By all accounts, 2015 is likely to wind up as the hottest year on record, with large parts of the world suffering from severe heat waves and wildfires ~ which includes Greenland.

Could it be that the global conveyor belt system is already being affected? Apparently so according to Truthout ~

” a stretch of the North Atlantic below Iceland and Greenland is experiencing all-time cold temperatures, according to the National Oceanic and Atmospheric Administration. What explains this anomaly? According to scientists from the Potsdam Institute for Climate Impact Research and Pennsylvania State University, among other institutions, the most likely explanation is the arrival in the area of cold water from the Greenland ice sheet that is melting ever more rapidly thanks to climate change. Because this meltwater starts out salt-free, it has remained near the surface and so, as predicted, is slowing the northern advance of warmer water from the North Atlantic Current.“

“So far, the AMOC has not suffered a dramatic shutdown, but it is slowing, and scientists worry that a rapid increase in Greenland ice melt as the Arctic continues to warm will pour ever more meltwater into the North Atlantic, severely disrupting the conveyor system. That would, indeed, constitute a major tipping point, with severe consequences for Europe and eastern North America. Not only would Europe experience colder temperatures on an otherwise warmer planet, but coastal North America could witness higher sea levels than those predicted from climate change alone because the Gulf Stream tends to pull sea water away from the eastern US and push it toward Europe. If it were to fail, rising sea levels could endanger cities like New York and Boston. Indeed, scientists discovered that just such a slowing of the AMOC helped produce a sea-level rise of four inches from New York to Newfoundland in 2009 and 2010.“

How likely is this tipping point to happen?

“In its 2014 report on the status of global warming, the IPCC indicated that the likelihood of the AMOC collapsing before the end of this century remains relatively low. But some studies suggest that the conveyor system is already 15%-20% below normal with Greenland’s melting still in an early stage. Once that process switches into high gear, the potential for the sort of breakdown that was once science fiction starts to look all too real.” See full story ~

This is an important story so the world awaits the findings of the Greenland on- the- ground researchers ~ for their report could well effect the fate of the Earth.

Heart centered spiritual consultant and advisor Allen L Roland can be contacted at  [email protected] Allen is also a lecturer and writer who shares a weekly political and social commentary on his web log and website allenroland.com. He is also featured columnist on Veterans Today and  guest hosts a monthly national radio show TRUTHTALK on www.conscioustalk.net