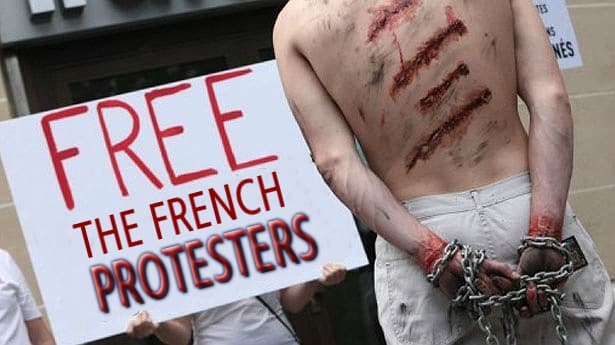 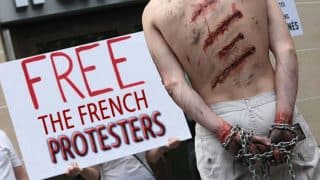 The free exchange of ideas is the only way to make progress. Laws that restrict free speech are a crime against us all and a roadblock to progress. In France this was made obvious when a French court upheld a lower court’s conviction of 12 people who were arrested for wearing shirts with the slogan “Long live Palestine, boycott Israel” and for passing out leaflets that contained the statement “buying Israeli products means legitimizing crimes in Gaza.”

In confirming the sentences, the Court of Cassation cited the French republic’s law on Freedom of the Press, which prescribes imprisonment or a fine of up to $50,000 for parties that “provoke discrimination, hatred or violence toward a person or group of people on grounds of their origin, their belonging or their not belonging to an ethnic group, a nation, a race or a certain religion.”

It’s hypocritical and amazing they have the phrase “Freedom of the Press” in a law which attacks free speech. To be more honest they should rename the title of the law to “Restrictions of the Press.”

This attack on the Jewish state of Israel’s behalf, an attack which allows the Israeli Occupation Forces to “provoke discrimination, hatred or violence toward a person or group of people on grounds of their origin, their belonging or their not belonging to an ethnic group, a nation, a race or a certain religion”  is NOT at all limited to France. In this insightful and important article, Glenn Greenwald reports:

Joel Rubinfeld, co-chair of the European Jewish Parliament and president of the Belgian League Against Anti-Semitism, told Haaretz last February that he wanted other countries to follow the French model of criminalizing anti-Israeli-occupation activism. After a French lower court convicted the BDS activists, Rubinfeld gushed: “The French government and judiciary’s determination in fighting discrimination, and the Lellouche law especially, are exemplary for Belgium and other nations where discriminatory BDS is happening.”

Thank God for the success of the American Revolution and the ensuing creation of the First Amendment’s guarantee of freedom of speech. This prevents the pro-Israel US government from arresting people, as was done by the pro-Israel government in France, for being critical of the Jewish state and demanding they stop their ethnic cleansing. However, in practical application, it is very difficult to get ideas out to a large audience in the US due to the stranglehold organized Jewry has on the media in the US. This greatly limits the impact of free speech and the free exchange of ideas. 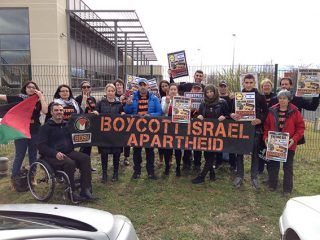 One of the greatest people ever produced by France was the Deist and Enlightenment philosopher, Voltaire. This quote from Voltaire would probably get him arrested in France today:

The Jewish nation dares to display an irreconcilable hatred toward all nations, and revolts against all masters; always superstitious, always greedy for the well-being enjoyed by others, always barbarous — cringing in misfortune and insolent in prosperity.

The American founder and Deist Benjamin Franklin was very popular in France during the 18th century. He was the driving force behind France supporting the American Revolution with large amounts of cash, weapons and troops. Ben Franklin said the free speech:

In those wretched countries where a man cannot call his tongue his own, he can scarce call anything his own. Whoever would overthrow the liberty of a nation must begin by subduing the freeness of speech.

Based on his quote, Ben Franklin would consider modern day France as a wretched country for its smashing of free speech.

Israel is based on the brutal and ungodly Hebrew Bible/Old Testament. This ancient collection of superstition based books offers a blueprint for Israel to “overthrow the liberty” of nations. This desire for world domination by the Jewish state is reflected in Isaiah 60:12 in which the ancient Jewish writers put these words into God’s mouth:

For the nation and kingdom that will not serve thee shall perish; yea, those nations shall be utterly wasted.

In fact, there are many, many claims to Israel over all and Jewish superiority throughout the Bible. The fact that the majority of people living on our planet Earth today belong to a “revealed”/hearsay religion that actually teaches that these Jewish scriptures and writings are the Word of God makes clear how successful they are.

We can derail their crazy train with innate God-given reason. As another American founder who was a Deist, Thomas Paine, wrote on page 245 of The Age of Reason, The Complete Edition:

Nonsense ought to be treated as nonsense, wherever it be found; and had this been done in the rational manner it ought to be done, instead of intimating and mincing the matter, as has been too much the case, the nonsense and false doctrine of the Bible, with all the aid that priestcraft can give, could never have stood their ground against the divine reason that God has given to man.

Our salvation from the misery the enemies of free-thought, free speech and progress have in store for us can be overcome with appreciating and using our innate and God-given reason.