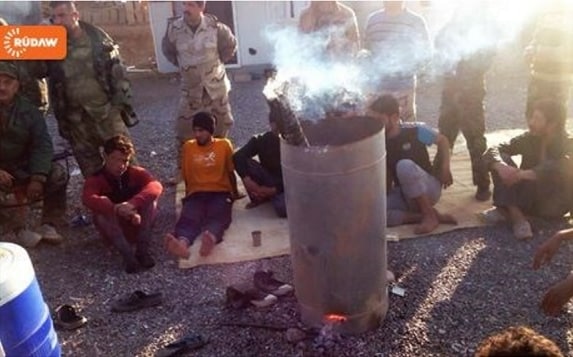 ERBIL, Kurdistan Region – Multiple groups of Islamic State, or ISIS, fighters have surrendered to Peshmerga forces in recent days at varios points along the Gwer-Makhmour front some 60 km southwest of Erbil.

Officials on Gwer front estimate that this year at least 100 ISIS militants have surrendered to Peshmerga forces.

“Those who have submitted themselves to the Peshmerga will be questioned and transferred to the Ministry of Peshmerga,” Qadir said

“At around 6am on Monday, nine ISIS militants surrendered to the Peshmerga in the village of Sultan Abdulla on the Gwer front,” said Saifulla Shamsaddin, a Peshmerga lieutenant. “The surrendered militants were in civilian clothes and crossed the river and reached Peshmerga front lines.”

One of the members of this ISIS group was questioned by Rudaw about the reasons for deserting.

“We fled for two reasons: fearing death and starvation,” the extremists told Rudaw.

“There is no trust within the organization [ISIS]. If they suspect a militant they will kill him right away.”