Home WarZone NEO – The Saudi-Israeli Elephant in the Room 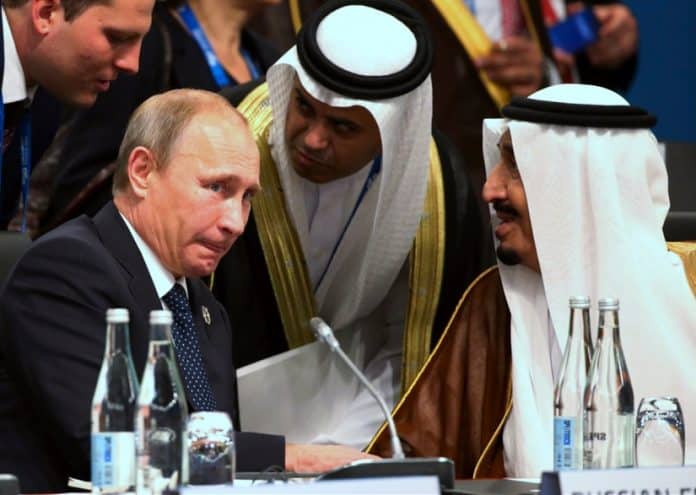 The marriage between Saudi Arabia and Israel is at the heart of ISIS. The money and power of these two nations who, along with Turkey, rule the influence peddling industry that is at the heart of Washington DC, may well be not only wielding the CIA but is likely behind America’s phony bombing campaign and the continual “accidental” air drops of weapons to terrorists in Iraq and Syria.

When and if the first BUK missile in the ISIS arsenal, shipped from Ukraine under American military supervision, shoots down an American plane, you can be sure Russia will be blamed just exactly as they were over MH17.

One thing is clear, the term President Reagan coined, “axis of evil,” aptly describes something alive and well then as it is today, the unspoken, unreported but inexorable factor increasingly exuding its poisonous and malignant insanity across wider swaths of our planet.

There was a reason for Russia’s move into Syria, not just the request by President Assad for aid. Russian President Putin, while in Saudi Arabia in June, received an “offer he couldn’t refuse” from Saudi Defense Minister Mohamed bin Salman.

We don’t know what the Saudi’s offered, most likely selling out the people of Syria, Yemen and Iraq in all or part, we weren’t there. What we do know is that in making this offer they may well have sealed their own doom. However we do know some of it.

This week it was learned that Saudi Arabia, working with Jordan, Israel and the CIA and aided by rogue Palestinian factions, planned a lightning strike against Syria’s capitol of Damascus. Saudi Arabia was supplying money, mercenaries, American built M1A tanks by the shipload while Israel was to fly air cover with the air force America gave it.

They were waiting for the stifling heat to break while an Israeli force of 800 set up command and control facilities for the terrorist groups that were to bear the brunt of the fighting, led by the CIA’s al Qaeda partners inside Syria, Jabat al Nusra and the so called Free Syrian Army.

A combined ISIS and al Nusra drive on Aleppo, aided by the Turkish Army, cutting off Latakia, was to draw off the Syrian Arab Army, leaving the capitol exposed. Recent American attacks on the Aleppo power stations were to signal the beginning of the drive on that city of 2.5 million, what was scheduled to be the “beginning of the end” for Syria.

Then came Russia. Secret Russian air attacks across Southern Syria and the Golan Heights that never show up on the maps from groups like the Institute for the Study of War annihilated the units in place needed to provide support for this strike. One Israeli general is dead, another captured in Iraq, Turks, Saudi’s and Chechens killed and captured. Conversely, four Iranian generals have died in the defense of Syria.

One nation may well cause more suffering in the world than any other. Depending on whose propaganda and what point of view dominates your “little grey cells,” the real “elephant in the room,” the center of the true “axis of evil” isn’t the United States or Russia, not Israel or Iran or even North Korea, it is the Kingdom of Saudi Arabia.

Let’s begin our journey with a story. Back in early 2001, a top CIA asset known as Colonel Timothy Osman or to some, Osama bin Laden, was dying, advanced kidney disease was killing him. Osman, working out of Pakistan, had been America’s key to arming the Mujahedeen during the war in Afghanistan and was intelligence coordinator between the Saudi intelligence services and the CIA.

His counterpart, coordinating Saudi intelligence operations with Mubarak’s Egyptian regime was a man known as Mohammad Atta, but we don’t need to get into that right now. We have, as it is said, “other fish to fry.”

Osman, or as he is now called, bin Laden, was transferred by private CIA jet from the ICU of an American hospital in the Persian Gulf to a small airport in Virginia. There, by ambulance he was taken to the Bethesda Naval Medical Center in Maryland. By December 13 of 2001, bin Laden was dead after being made the “fall guy” for Saudi involvement in the 9/11 plot. America’s primary CIA asset for over two decades was buried in the mountains of Tora Bora in Afghanistan, a fact reported even by America’s Fox News, a fact like so many that were quickly forgotten.

A few months later, on September 11, 2001, American broadcasters like Dan Rather of CBS would report on the arrests of heavily armed Israeli teams, under Atta’s command, that had been planting radio jammers and explosives around Manhattan on that fateful day. Today you can show Dan Rather the video where he makes these reports and he will claim that it must have been someone else.

Saudi Arabian money, though said to be running out, still wields unprecedented power around the world. The 2003 9/11 report citing their complicity along with Israel and a cabal of leading international figures was quashed as with the portions of the later watered down report for public consumption.

America is still pouring arms into Saudi Arabia while the Saudis scour the world’s prisons for mercenaries to fight against the government of Yemen. This week plane loads of ISIS terrorists were ferried into Yemen while Colombia’s drug lords are preparing more “freedom fighters” to be sent to Yemen at the behest of their Saudi drug trafficking partners.

Though scholars have long questioned the tale of Exodus, Moses as a “construct” or that the Israeli tribes that moved down from the Steppes as early as 2000 BCE may well never have been in Egypt at all, there are those who believe that the Red Sea did well part, many miles south of Sinai and that it was a “right turn,” into the Arabian Peninsula not a “left turn,” north into Judea that established ancient Israel.

True or not, to many, including the Saudi Royal family, the legitimacy to rule is not established through the Prophet but as the only “legitimate” direct descendants of ancient Israel. A hidden Saudi mythology sees the current Jewish inhabitants of Israel as European pretenders, survivors of a 10th century Turkish tribe that had converted to Judaism.

Saudi Arabia’s rulers see themselves as predating the Prophet having drawn their consecrated authority from a covenant with god. This is the real disease behind the Wahhabist insanity fueling world terrorism, an extremism that has drawn Saudi Arabia and Israel together, partnering them with heretical evangelical Christians.

The militarism of the United States, whose military and extremist Republican Party is controlled by these elements in combination with the Saudi-Israel cabal, has created a series of conflicts so insane, so irrational in nature that they are, in a sane world, visions of unbalanced fiction only.

Gordon Duff is a Marine combat veteran of the Vietnam War that has worked on veterans and POW issues for decades and consulted with governments challenged by security issues. He’s a senior editor and chairman of the board of Veterans Today, especially for the online magazine “New Eastern Outlook”.
____________