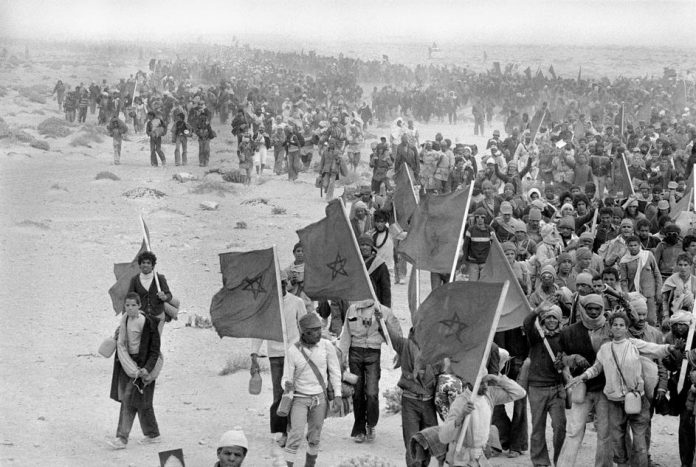 I will be giving a talk entitled “We Are NOT Charlie Hebdo! False Flags and Islamophobia” here in Oujda, Morocco on Friday, November 6th – the 40th anniversary of the Green March. If you are in or around Oujda and would like to attend, contact me through my website TruthJihad.com and I’ll give you the where and when. -KB 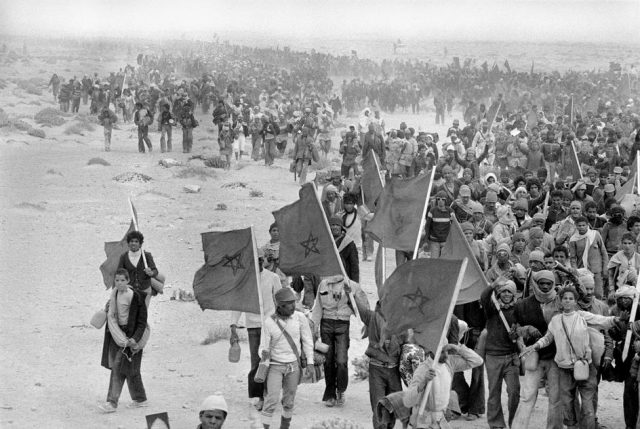 Green is also the color of al-Khadir, the wisdom teacher who enlightened Moses. Al-Khadir’s very footprints are said to sprout greenery almost as fast as he lays them down.

Forty years ago, three hundred fifty thousand Moroccans left their green footprints on what was then the Spanish Sahara. They also left their footprints on history. The Green March of November 6th, 1975 was one of the most remarkable and efficacious peaceful demonstrations ever. 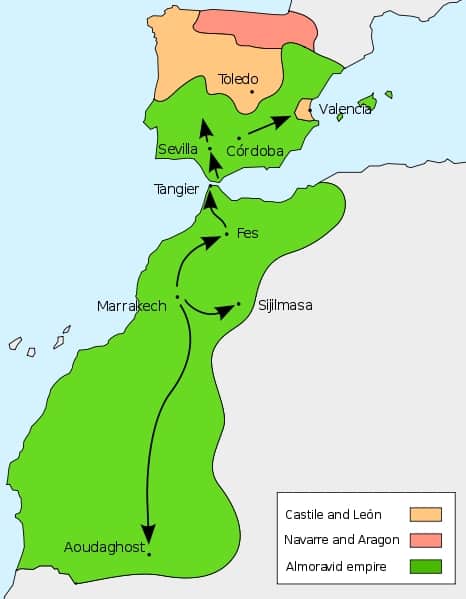 I didn’t always see it that way.

Left-leaning academicians (I was once one myself) have tended to view Morocco’s recuperation of its Saharan territories as an occupation. Some even compare the Algerian-backed Polisario guerrillas to Palestinian freedom fighters.

So what really happened 40 years ago?

Morocco’s historical identity dates back about 1200 years, to the founding of the Idrisid dynasty. Fez and later Marrakesh have been the two rival political centers of gravity ever since.

Throughout much of the past 1000 years Moroccan sultans have ruled territories much larger than today’s Morocco. (Admittedly, the word “ruled” meant something different then than it does now; for most of history, a ruler’s territory consisted of everything within reach of his tax collectors – which created fluid borders that would periodically expand and contract in various directions.)

At its height, one Moroccan state – the empire of the Murabitun (Almoravids) – encompassed most of today’s Morocco, Spain, Portugal and Mauritania and part of Algeria. Another even bigger Morocco, ruled by the Muwahiddun (Almohads) consisted of half of Spain and Portugal and virtually all the populated portions of today’s Morocco, Algeria, Tunisia and Libya.

So what happened to Greater Morocco (al-Maghreb al-Kabir), which in English is called the Greater Maghreb – a term that still encompasses all of North Africa west of Egypt? Short answer: It was busted up by Europe, which rose to world domination during the past five centuries.

First came the reconquista – the Christian conquest and ethnic cleansing of Spain. Though Christians and Jews had lived happily and prosperously in Islamic Spain, the new Christian rulers post-1492 were not so tolerant. “Convert or die” has never been a slogan of Muslims, who are bound by the Qur’anic dictate “no compulsion in religion.”* But it has often been a slogan of Christians…including those who expelled the Muslims and Jews from Spain. (Most went to Morocco, which welcomed them with open arms…the beginning of a tradition of hospitality that continues today, with Morocco being the only African country that accepts refugees.)

As Christian Europe gradually conquered the globe, bits and pieces of Morocco were gobbled up, and indigenous power was whittled away until little remained. For a few centuries the Christians’ Islamic rival to the east, the Ottoman Turks, ruled (with a  light hand) what is now Algeria – until the French invaded, occupied, and tried to annex it beginning in the 1830s.  France’s rule in Algeria was despotic, absolutist, and (at least culturally) genocidal.

Around the same time, France and Spain divided up Morocco. Meanwhile France ruled Tunisia, and Italy colonized and massacred much of the population of what is today Libya.

During this tragic period, what is today Morocco was the only part of the Greater Maghreb that succeeded in preserving its milennium-old national identity. The colonial powers effaced that identity everywhere else. In the region of Greater Maghreb that is today called Algeria, the French did their best to wipe out the Arabic language and traditional culture. They very nearly succeeded. Even today, independent Algeria – born from the blood of a million martyrs – remains a traumatized society, cut off from its historical Arabic-Islamic-Maghrebian roots, swamped by French cultural imperialism, and crushed by a secular French-oriented comprador class and a corrupt military dictatorship.

After World War II, European countries were forced to grant independence to their former colonies. A coalition led by King Mohammed V and Islamic activists from Fez, backed by tremendous popular support, succeeded in forcing the French and Spanish out of much of Morocco in 1956. But the Spanish held on to the port cities of Ceuta and Melilla – as well as the big slice of southern Morocco that Spain called “Spanish Sahara.” And the French held onto Algeria, which they claimed was an integral part of France. Naturally, much of what Moroccans think of as Morocco, including the Algerian sahara, remained with the stronger party, France.

After the Algerian revolution expelled the French in 1962, Morocco and Algeria began jockeying over where one country ended and the other began. Morocco’s position was based on long-standing historical identity. Algeria’s position was: “Everything the French carved out and then some belongs to us.” In the interests of solidarity with the Algerian revolutionaries, whom Moroccans had supported in the struggle against the French, Morocco effectively ceded what could have been its claims to much of Algeria.

By the mid-1970s, Spain was ready to withdraw from most of its former colonies – including that part of Spanish-occupied Morocco known as Spanish Sahara. The question was, what would happen when Spain left?

Algeria, which supported (some say controlled) the tribal guerrillas known as the Polisario, wanted to extend its influence by creating a nominally independent Western Sahara that would be under de facto Algerian control. Morocco, which was tired of losing territory, said no.

And thus the stage was set for the Green March.

On November 6th, 1975, answering the call of King Hassan II, three hundred fifty thousand unarmed Moroccans gathered in the border town of Tarfaya. When the King gave the signal, the Moroccans ignored threats from the Spanish military and marched peacefully across the border. Carrying Qur’ans, Moroccan flags, and signs and banners calling for the return of the Moroccan Sahara, the Green Marchers nonviolently changed the political map of the world. How often does that happen?

The Green March was a logistical miracle. Providing food, shelter, and sanitation for 350,000 people marching across undeveloped desert isn’t easy.

As a result of the Green March, Spain withdrew and relinquished its Saharan territories to Morocco and Mauritania.

Unfortunately Algeria and the Polisario did not back down. An ugly guerrilla war ensued till around 1990. Since then the political argument has gradually shifted in Morocco’s favor.

So why have I come to sympathize with Morocco’s position?

Maybe it’s because I am no longer a flaming leftist enamored of modernity and so-called progress. In other words, I have stepped outside  the New World Order brainwashing bubble.

The neoconservatives, those shock troops of modernity, put it bluntly: “Creative destruction is what we do.” (Their conferères, the French, sure did creatively destroy Algeria.)

Such “creative destruction” is the  M.O. of the New World Order. The NWO seeks to destroy traditional identities and institutions including the family, the nation, and religion. In their place, it offers a vast wasteland: the unholy trinity of materialism, consumerism, and individualism…culminating in global tyranny.

Admittedly, there have been encroachments of consumer-capitalist decadence. Admittedly Morocco faces enormous problems including corruption, environmental degradation, economic and educational challenges, Takfiri influences from the Gulf states, European cultural colonialism, and ceaseless pressure from the New World Order. And admittedly Morocco has been unable to outright oppose Western power, as Iran has.

But all in all, the Moroccan throne – the Makhzen – has done a decent job of preserving the nation’s identity and traditions, while trying to foster education and economic development in a country only moderately endowed with natural resources. It’s a balancing act with many zero-sum games. Any way you slice it, the leadership in Rabat has excelled by comparison with its neighbors, namely:

Algeria: An oil-rich country that has fallen into poverty due to mismanagement and corruption; its Deep State military dictators murdered more than 100,000 of their countrymen during the 1990s wave of false flag terrorism that eliminated the democratic Islamic opposition.

Tunisia: Ruled by a brutal ultra-secularist dictatorship; the Tunisian nation may be on the road to reclaiming its traditional Islamic identity – a tough task when that identity has been culturally genocided.

Libya: Ruled for decades by a somewhat clownish dictator who at least knew how to spread his oil revenues around; now fallen into chaos as a result of NATO’s destabilization.

All of the above countries of the Greater Maghreb share a common religion (Islam), a common educational language (Arabic), and a somewhat common culture. They really ought to reunite…or at least join an EU-style common market and common currency.

The Greater Maghreb states are in the process of reclaiming their traditional Islamo-Arabic identities. To do so successfully, they will need to base themselves on traditional Islam, i.e. tolerant and inclusive Islam. Morocco offers a reasonably good model in this regard. The country’s top religious official, Awqaf Minister Ahmed Toufiq, is an accomplished scholar of Moroccan religious tradition in general and Sufism in particular. The leading legal Islamic political party, the PJD, won elections after Morocco’s announced (but slow) transition to Constitutional Monarchy status in 2011; while the vast semi-legal but election-disqualified Islamic movement, Al-Adl Wa Al-Ihsaane, continues to represent the purist and disaffected element of Islamic activism.

It’s messy. It ain’t always pretty. But at least Morocco has been spared the horror stories that have afflicted much of the Arab world.

And at least it’s alive. The USA has been brain-dead since the 9/11 coup. France is even more brain-dead, as was demonstrated by the four million Charlie Hebdos last January. But here in Morocco, everyone knows that 9/11 and Charlie Hebdo were inside jobs. Cab drivers, guys at cafés, and my in-laws are well-versed in current events.

So Moroccans should get credit for preserving their traditions, setting a not-so-bad example for their maghrebian neighbors, and preserving some of the territory that has been theirs for a thousand years.

Congratulations to al-Mamlaka al-Maghribiyya on this occasion of the 40th anniversary of the Green March.

*Today’s Takfiris, who massacre those who don’t share their beliefs, are a historical aberration.