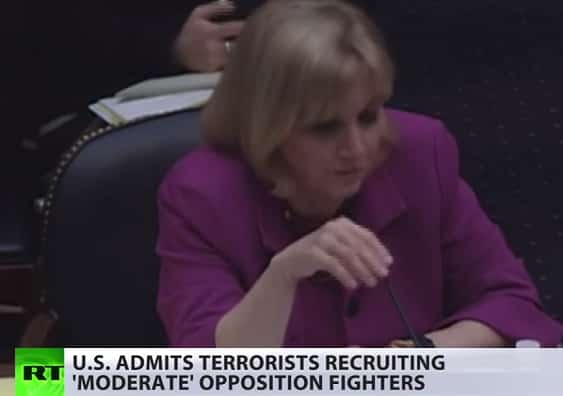 The US State Department has admitted that some of the so-called moderate rebels in Syria have been successfully recruited by the al-Nusra Front, an Al-Qaeda affiliate, which is being targeted by Russia’s air campaign in Syria.

The information came from US Assistant Secretary for Near Eastern Affairs Anne Patterson, giving testimony in front of lawmakers.

“The Nusra Front, which is an al-Qaeda affiliate, has absorbed a number of what we would previously call the moderate opposition,” Patterson told the House Foreign Affairs Committee.

However, the revelations had very little impact on US President Barack Obama’s plans in Syria, as Washington continues to criticize the Russian air strikes and is planning to send around 50 special operatives to Syria to train and assist the moderate rebels.

“The vast majority of Russian air strikes are targeted in areas where the Assad regime has lost territory to forces led by the moderate opposition,” claimed US Assistant Secretary of State, Victoria Nuland. “We are accelerating the work we are doing to support the moderate Syrian opposition and to protect Syria’s neighbors.”

On Friday, White House spokesman Josh Earnest announced that the US would be sending around 50 US advisers to Syria to train so-called “moderate rebels.” Earnest defined the mission as to “train, advise and assist.”

The move to send American military advisors to Syria completely contradicts what the US President Barack Obama promised just over two years ago: “I will not put American boots on the ground in Syria,” he said during a televised national address on September 10, 2013.

Some critics have spoken out, labeling the US move as unlawful.

“There is not legal authorization for troops to go into Syria without permission. This is illegal. Congress has not been consulted or asked and they have not approved it. So the president is acting out of bounds,” retired US Air Force lieutenant Karen Kwiatkowski told RT.

“Clearly, [the US] strategy of working with what we considered to be moderate rebels was wrong. And it is going to be put to an end I think. People in Washington have an imagination about how the mIddle East works that is really not related to reality at all,” Kwiatkowski added.

American advisors being deployed to Syria also brings up all the issues related to previous failures of the US train and equip program that had been run out of Turkey. The US eventually gave up on the training part of the project, as senior US officials admitted that, despite the program’s $500 million budget, the US had only trained a handful of fighters.

However, there were cases when the stockpile of weapons given to the US-trained rebels ended up in the hands of terrorists, after the so-called “moderates” willingly handed them over to jihadists soon after crossing into Syria.