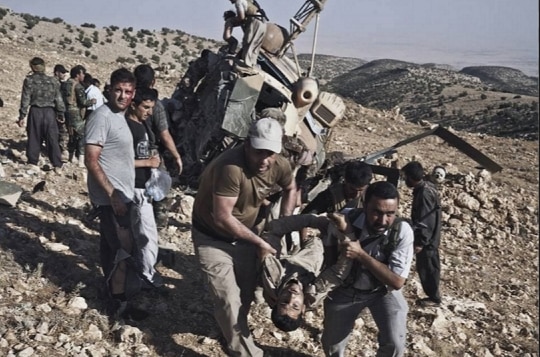 5:14pm – Nasir Ali, a Rudaw correspondent, said the bodies of 40 ISIS militants were found abandoned at an Arab village in the Hardan sub-district of Shingal. Ali also said that after five consecutive assaults  Kollat village near Shingal was recaptured by the Peshmerga.

4:52pm – Rudaw correspondent Hevidar Ahmed said on the scene that the Peshmerga have captured the main ISIS supply line on the  Baaj-Shingal road and that the ISIS militants inside Shingal are all surrounded with no way to escape.

4:35pm – Rudaw correspondent at the scene of the fighting says Peshmerga forces advancing on the Solakh area of eastern Shingal. Heavy street fighting has been confirmed in this area.

4:28pm – Zaim  Ali, a Peshmerga commander, says ISIS is surrounded and there is no chance for any of the extremists to escape. “They will all be killed,” Ali tells Rudaw.

4:18pm – Brigadier Kamil Harki, a Peshmerga commander on the battlefield, tells  Rudaw a main ISIS base in Shingal has been captured by the Peshmerga.

3:53pm– Rudaw correspondent Arina Moradi reports more than 100 Kurdish Yezidis originally from Shingal, including many women and children, are stopped at Sahela checkpoint trying to return to the homes they were forced to abandon when ISIS seized the town in August last year. A teacher from Shingal named Ahmed told Rudaw that security forces are not allowing the refugees back into Shingal at the present time.

3:47pm – US Deputy Special Envoy Brett McGurk confimrs that during the past 24 hours the US coalition has conducted 40 airstrikes on ISIS strongholds in Shingal and Tal Afar.

3:15pm – Nasir Ali, Rudaw correspondent on the Hardan front on the east side of Mount Shingal, said Kurdish forces have split up to achieve pursue multiple objectives.”Several groups are heading towards some Arab-inhabited villages and another force is heading to Fazilia,” Ali said from the battlefield.

Rudaw correspondents report that armed forces from northern, eastern and western Kurdistan are involved in the liberation of Shingal and many Peshmerga had volunteered to fight.

2:50pm – Kamil Harki, a Peshmerga commander, tells Rudaw that Kurdish forces are only 3km away from the center of Shingal.

Harki said the Peshmerga have obtained the bodies of eight ISIS militants who were killed when their cars were destroyed during the dawn attack Thursday in Fazilia village near Shingal.

2:03pm – US Lieutenant General Mark Hertling told Rudaw that Shingal liberation is not an easy task, but the Kurds are backed up by a strong government and want to liberate their land. Peshmerga forces have progressed in the terms of military tactics needed for such an offensive.

Hertling, who has visited Shingal, said that most of the areas are planted with explosives and landmines and that is why the operation was conducted with patience.

Hertling considers Shingal operation to be very significant because it will help the Iraqi Army advance in other areas held by the self-claimed Islamic State, or ISIS

“I am very happy and I congratulate all the Yezidis. We have many victims and martyrs  and their rights will be honored soon.

East Front: Three villages – Gre Tl Shore, Fadheliya and Qen – now controlled by Peshmerga forces. The have secured a stretch of Highway 47 between Sinjar and Tal Afar at Um Shababit Checkpoint. Remains of at least 11 ISIL terrorists have been left abandoned in the area.

There is an active firefight with ISIS terrorists in Gulat village in the East front.

Five vehicle-borne improvised explosive devices have been destroyed – four by international coalition airstrikes and the other by Peshmerga forces using Milan anti-tank rockets. VBIEDs continue to be mobilized against our forces in a desperate attempt to slow down the offensive.

Radio chatter of an ISIS Emir can be heard instructing ISIS terrorists to stay and fight in Sinjar, adding that anyone fleeing the battlefield will be killed.

Approximately 30 ISIS terrorists have been killed in all fronts.

1:28pm – A Peshmerga commander tells Rudaw that he had heard ISIS militants on the radio talking about escaping Shingal. He said some of the militants refused  and encouraged other fighters to stay.

12:51pm – Kurdish Yezidis at a displacement camp in Zakho had praise for the  Peshmerga’s Thursday assault on Shingal.

“It has been one year since we became refugees and fled our homes. ISIS abducted our women and children. We want them to be rescued and Shingal to be liberated,” a Yezidi from Shingal told Rudaw.

Another refugee said: “Today is our Eid. We thank God, the Peshmerga fighters and the president.”

12:33pm – Sheikh Alo, commander of Peshmerga forces in Dohuk, tells Rudaw that the Shingal offensive has been aided by the most effective use of coalition airstrikes in support and cooperate with Kurdish forces.

12:14pm – Arina Moradi, Rudaw correspondent, reports that ISIS propaganda has increased on its radio station broadcasting from inside the city of Mosul. One ISIS radio message said: “Thank God our families are back in Tal Afar and the situation is secure.”

Earlier news from Rudaw contradict the ISIS message, reporting the advance of Peshmerga and the capture of at least three villages on the outskirts of Shingal.

11:45 – Ahmed Shawqi, a Kurdish military expert, tells Rudaw that Shingal is extremely strategic and the Peshmerga will achieve victory with their precise tactics. He explained that Shingal is the critical link between the ISIS stronghold cities of Raqqa, Syria, and Mosul.

11:40am – Rudaw’s Arina Moradi reports seeing hundreds of Peshmerga fighters lining roads to the Shingal battlefield armed with AK47s waiting to join the Kurdish forces already in the fight.

11:30am – Iraqi media war office releases statement on Shingal operation, reporting that Kurdish Peshmerga fighters have managed to control five villages and they are on the advance.

11:27 –
Nichirvan Hussein, Rudaw correspondent near Shingal, says said at least four ISIS car bombs have been destroyed, one by US coalition airstrikes and three by Peshmerga forces.

11:20am – Intense fighting in the western parts of Shingal town where  Rudaw correspondent Obed Rashavayi reports that Peshmerga engineer and de-mining squads are working ahead of the Peshmerga advance in order to save lives from ISIS explosives.

11:05am – Cement factory, 5 km from the center of Shingal, retaken by Peshmarga forces.

10:40am – Dr Barham Salih, deputy secretary general of the Patriotic Union of Kurdistan, tells Rudaw: “We hope ISIS will be driven out of Shingal as soon as possible so we can all work together to rebuild it.”

“I hope the Peshmerga will be victorious in the Shingal operation. Today, everyone is following the fighting in Shingal closely.”

10:30am – Hemin Hawrami, head of Kurdistan Democratic Party (KDP) Foreign Relations Office, posts on social media that the Peshmerga forces have entered the town of Shingal and are engaging in house-to-house fighting.

10:25am – Nofel Hamadi Akup, the governor of Mosul province, said Thursday that the current Peshmerga-led campaign to liberate Shingal should be considered the first step towards recapturing the Islamic State stronghold of Mosul city, where hundreds of thousands of civilians live in captivity.

“The brave Kurdish Peshmerga fighters have launched an assault Thursday to liberate Shingal. Fighting ISIS is not something new to the Peshmerga because ISIS fears the Peshmerga,” Akup told Rudaw.

The governor expressed optimism regarding the Shingal operation and said that the Peshmerga will achieve victory and taken a huge step towards controlling Mosul.

He said the liberating Shingal would come before an assault on ISIS-held Tal Afar, which would precede the anticipated operation to seize Mosul.

“The Shingal operation is conducted by Kurdish Peshmerga forces along the support of US coalition airstrikes without the participation of Iraqi Army,” the governor added.

9:30am – The mayor of ISIS-occupied Shingal town said Thursday that Kurdish leader Masoud Barzani had assured him that the terrorists will be driven from the Kurdistan region and that his area will be re-built even better than before.

“We will never forgive those who have killed our people and they need to face the law and be judged,” Mayor Mahma Khalil, told Rudaw

“The enemy tried to erase the Kurdish Yezidi from the map, but they failed and they will never succeed.”

Khalil also thanked Barzani for the efforts now underway to liberate Shingal and for the placement of people displaced by the extremist attack and occupation.

9am –  Aziz Waisi, the commander of the Zeravani Special Forces, tells Rudaw that Peshmerga forces are now attacking the town of Shingal.

“The Peshmerga assault to liberate Shingal started Thursday at dawn and Peshmerga fighters are on the advance,” Waisi said.

Waisi said that Peshmerga forces are well-equipped and have the an adequate supply of weapons.

8:30am – Peshmerga forces have dug trenches and forward operation positions around the town in the last several months.

“Coalition warplanes will provide close air support to Peshmerga forces throughout the operation,” said the KRSC about the offensive.

8am – Dildar Harki is one of many Rudaw correspondents at the scene, estimates that the number of total Kurdish ground troops is close to 20,000 and reports the use of heavy artillery on Shingal town.

Thursday, 7am – Kurdistan Region Security Council says “Operation Free Sinjar will include up to 7,500 Peshmerga from three fronts to cordon off Sinjar city, take control of ISIL’s strategic supply routes, and establish a significant buffer zone to protect the city and its inhabitants from incoming artillery.”

The statement adds that Peshmerga have dug trenches and forward operation positions around the town in the last several months.

“Coalition warplanes will provide close air support to Peshmerga forces throughout the operation,” said the KRSC about the offensive.