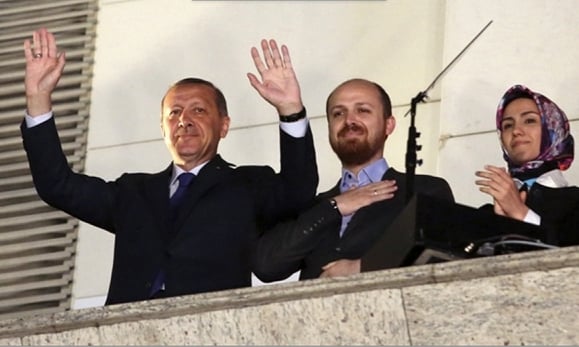 How can Obama claim  he didn’t know?
TEHRAN (FNA) – A female Iranian legislator in an open letter to the Turkish President’s wife, Emine Erdogan, voiced regret over the fist Lady’s silence on her son’s close ties with leader of the ISIL terrorist group.

“I was taken aback after seeing your son’s photo alongside the ISIL ringleaders, and your silence,” Laleh Eftekhari said in her letter on Wednesday.

She reminded Emine of ISIL’s crimes, including beheading of innocent people, killing children, using women as sex slaves and distorting Islam’s face, and said, “My sister! We are both mothers and this silence and ignorance is unlikely from a mother.”

Bilal Erdogan came under the spotlight after his photos with the leaders of ISIL surfaced in the world media. He has extensive ties and runs transactions with ISIL barbars. Bilal owns several maritime companies. He has allegedly signed contracts with European operating companies to carry Iraq’s stolen oil to different Asian countries.

The Turkish government buys Iraq’s plundered oil which is being produced from the country’s oil wells seized by ISIL. Bilal Erdogan’s maritime companies own special wharfs in Beirut and Ceyhan ports that are transporting ISIL’ smuggled crude oil in Japan-bound oil tankers.

Pamir said that the deal between Turkey and the ISIL dates back to summer 2012 when the Takfiri terrorists took control of the city of Raqqa. A former Turkish deputy foreign minister also confirmed Erdogan government’s purchase of oil from Turkey.

President Erdogan has dramatically vowed to leave office if any proof is provided that Ankara has been buying oil from the terrorist group Daesh (ISIL).