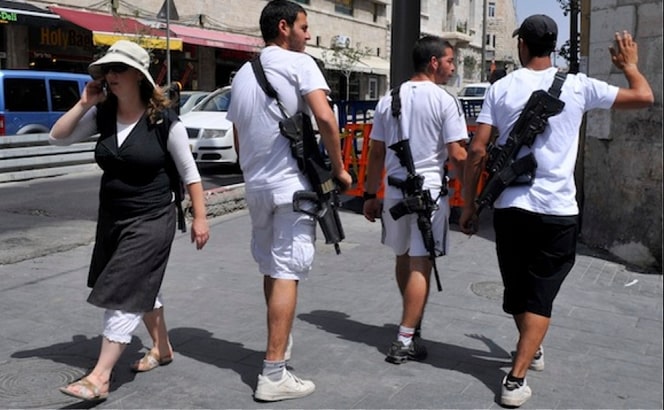 Decades ago, a popular TV show, All In the Family, dealt with ideas of gun control and terrorism from a “liberal” perspective.  Clownish right wing boogeyman, “Archie Bunker,” played by actor Carrol O’Connor, suggested that to end airline hijackings all passengers be given guns. “When the hijacker pulls out his gun, he doesn’t stand a chance.”

Archie Bunker was, as any sane person now admits, essentially correct.  This is how Israel defends itself, leaving out issues of “from whom” and “why.”

I do believe we can expect a continuation or worse, more mass killings in schools, the workplace for sure, theatres and shopping malls.  As for who is doing this and why, that is best left to conspiracy theorists who too often of late, get it right with the glaring exception of the miserable hoax of “Jade Helm” and the morons who tried to foist that on the public.

Getting right to it, the public should be armed, however there is a “Big Butt” as Peewee Herman had noted in his “adventure.”

Take this scenario into account:  You are at work, let’s say a Sears store, and two masked gunmen or women or whatever, enter with automatic or perhaps “semi-automatic” weapons.  Company policy doesn’t allow for guns.  Let’s say the company did allow for guns.  How can you work and carry a pistol that can face down an AK47?

Let’s say the company was enlightened and had a “response team” scenario in place, that involved calling for police, beginning evacuation, triage and “containment” using armed employees with real training.  Can this realistically be done?

The answer to that is a resounding “maybe.”

I’m a combat vet, as are countless Americans thanks to our phony wars of aggression against the oil countries, a highly trained marksman and my first tendency would be to head for the exit and get out of range.  First of all, let’s assume I am actually armed, something I am legally allowed to be in most states but not in many key situations.  Guns can’t be carried legally in countless places, many stores, schools certainly, places were alcohol is served (that is changing), the list is extensive.

Then there is the issue of what is legally self defense.  You see, in most if not all states, an armed civilian that confronts a “spree killer” or “terrorist” using a legally carried weapon may not be using that weapon in a legal manner.

Only sworn police officers can legally use weapons to protect “persons and property” as it says on the back of most warrant cards. Then again, as we all know quite painfully, police kill many more innocent people than terrorists anyway.  If only I were making this up.

What we can do is “harden” soft targets.  We can put killers “at risk” when they decide to hit a school or workplace by seeing to it that the best and safest armed response is available that does not depend on police who will sit in their cars for an hour waiting for SWAT or for the shooting to stop completely as in Columbine.

Do not ever depend on police to protect you and never talk to police without a good lawyer and a video recording being made, end of story there. First of all, not everyone who can legally carry a gun should carry one.  Not all that can and should carry a gun should be trained to use that weapon under highly stressful conditions as well.

You see, there are two kinds of people, those who run toward the shooting and those who run away.  Of those who run to the shooting, many of them are more dangerous than the terrorists themselves.  This is why we have so many police shootings, the badge and uniform has attracted this type of person who waits for a chance to empty a weapon into a jaywalker as was done in Chicago.

What we can do is put terrorists and killers at risk.  To do that, we harden targets by arming and training the best response teams we can through careful selection, real training and psychological screening well beyond that required for gun ownership or “carry license” rights.  I strongly recommend much better screening than police get as well.

Guns Must Be Mainstreamed

VT builds assault weapons for the civilian market through its Custom Shop in Howell, Michigan.  Combat weapons developed there sometimes look scary as hell but when you come to think of it, a scary weapon in the hands of “one of us” to use against dangerous psychotics is exactly what the doctor ordered.

The weapon above is a .458 SOCOM pistol capable of carrying up to 15 rounds of the most powerful “manstopper” 350 grain projectiles in the world, “beyond lethal” is an understatement.  The $2 bullets sound like a stick of dynamite and can crush body armor like a cockroach.  The problem is, though this is the perfect defense weapon, moderate range of 300 meters, high accuracy, controlled fire,  it is more than likely to scare the hell out of people who, unlike Israelis, tend to find guns offensive.

Part of this problem is the personna of the “gun person.”  This reminds me of going to the VA for medical care.  My version of motorcycle gear, as I only ride motorcycles for this kind of errand when weather allows, is pretty close to beach attire.  I am often as not in a t-shirt, shorts and sandals with Raybans as my head gear.  Others there all wear “hats and vests” festooned with military pride ID paraphernalia.

The problem being that military gear and biker criminal gang gear is almost identical.  This has, for years, caused much of the public to think of veterans as a dangerous underclass of violent biker types when the truth is so much the opposite…

This is the problem with appearances and how they are so often wrong.

Guns are much the same way.  Were guns seen as a responsibility rather than a “rite of passage,” it would be different.  Carrying a gun is a bother.  Though most states allow legal open carry, something almost nobody knows, doing so can get you wrongfully arrested.

Concealed carry is pretty childish, like carrying condoms in your wallet in hopes that the prom queen from 1980 will drag you out of line at the supermarket and ravage you in the back of her rusty conversion van in the parking lot. It is an act build out of endless fantasy scenarios, like the ones police have when they let loose and pepper an innocent couple in Cleveland, Ohio for instance.

In real life, drawing a weapon for a civilian invariably means an arrest, thousands for a lawyer, possible civil penalties as well and social stigma, even if done for the best of intentions.

Toward that end, we need laws that accept the reality of our society, that terrorist shooting “fantasies” happen often enough to now be realities and that the public needs to grow up, get used to seeing assault weapons carried openly by responsible “non gang affiliated” gun owners of all colors, races and creeds (whatever a “creed” is) and begin taking responsibility for the actual root causes of violence.

Those are, of course, religious extremism, false flag games by intelligence agencies, mental illness and a society that isolates more and more each year.  Violence is a sign of sickness and America is sick but not in ways commonly spoken of.  Separating real violence and real crazy people from staged violence like “Charlie Hebdo” or Sandy Hook is increasingly difficult.

Keeping Americans afraid is how Americans are now governed and how Washington has been able to operate as a “mob town” for decades, controlling press and staging mass killings.

Is this conspiracy theory?  Yes, I admit to believing in conspiracies but I also stand ready to prove them true, using “Hook and Hebdo” as glaring examples of sad half-baked and totally botched street theatre.

Do we want to talk of the Boston Marathon event? Even then, such events can target real people and the idea of mixing the real with the staged is why we all feel so lost, confused and powerless.

We accept the presence of legal weapons in the hands of the best qualified people around us.  Were I a terrorist with an AK47 and the .458 cannon above was carried by the young lady working the makeup counter, I would have second thoughts.

What we can do is give the crazies, whether from Langley, Tel Aviv or Ankara, or even from down the street, second thoughts.  We can stop being powerless. We can accept we are at war and prepare for it.  We can’t simply buy an army, crushing our own economy and sending our kids around the world to crush others like we did during the Bush and now Obama years.

During World War II, we accepted rationing.  All sacrificed some.  This war is one we ourselves bought, we brought it on ourselves by voting for idiots, by silence when criminal elements decided owning and operating the American military was how the world could be enslaved.

Sound radical?  Where have you been for the past 40 years or more?  Get with the program!

Let’s fix the police, watch them, clean them up, support them properly.  Let’s get everyone involved, arm all of us “Archie Bunker style.”  Let’s mainstream legal weapon ownership, put an end to the one way slaughter but, in the process, do so responsibility.

Yes it can be done responsibly.  We can train, like the damned Israelis do, for terrorism in our schools, on public transportation and in shopping centers.  We can’t stop it all but we can “harden” our “soft targets.”

In the process we can accept we are at war.  We can also learn to accept the cost of our own stupidity, we can grow up, start taking care of ourselves, stop looking for “quick fix safety” that has created the surveillance state we have now.  What might help as well is universal military training so that people like our leaders, Trump, Romney, oh yes, Obama and Clinton as well, might actually know a bit more about real life.

We can also do it together, all of us.  That might be nice for a change.