The C146A ‘Wolfhound’ is used to deploy special operations forces for counter-terrorism operations.  It has now been deployed against the infamous ‘Wall of Moms’ terror group operating in and around Portland, Oregon. (US Air Force Press Release) 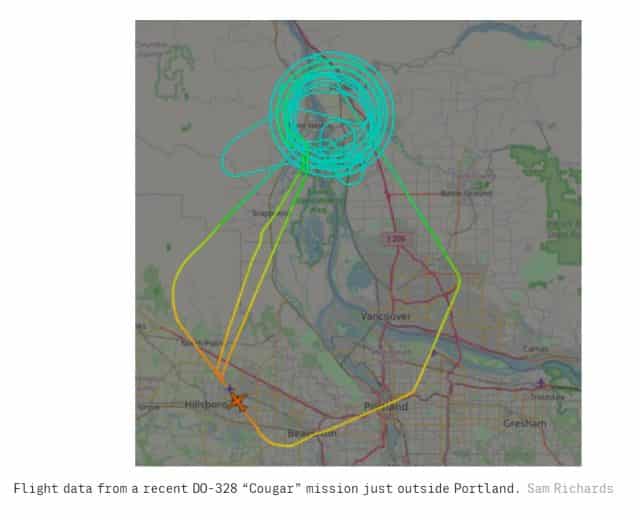 WHILE ANONYMOUS FEDERAL agents have thrown protesters into unmarked vans and fired tear gas at Portland’s mayor in recent days, an Air Force surveillance plane designed to carry state-of-the-art sensors typically reserved for war zones has circled the Oregon city’s outskirts from above.

The plane, a DO-328 “Cougar,” was spotted via the open source flight tracking website ADS-B Exchange, allowing the public to monitor its course. The Intercept reviewed this flight data, confirming tight, circular flights consistent with surveillance operations in and around Portland.

The aircraft is a twin-engine plane built in a modular fashion that allows it to be outfitted with long-range surveillance equipment suitable for supporting U.S. Special Operations commandos on the ground, according to Air Force documentation and previous public reporting. It was in Colorado earlier this month, looping over Denver and Boulder, before flying to Portland on July 19, and has been circling above Portland and its suburbs since July 21, according to publicly available flight data aggregated by websites like ADS-B Exchange.

At a Special Operations Forces Industry Conference in 2015, as first reported by the defense blog War Is Boring, Air Force Col. Eric Forsyth detailed the Cougar’s capabilities for conducting intelligence, surveillance, and reconnaissance, or ISR, showing off the equipment’s potential to aid U.S. troops from above. “With jacks for power, Ethernet, GPS and other linkages, engineers can easily install all sorts of gear,” wrote War Is Boring’s Joseph Trevithick at the time. “These systems would potentially be able to run long-range radars, powerful cameras, high-powered radios, laser range finders and more.” 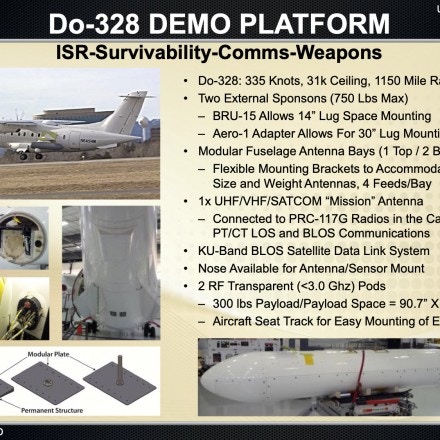 DO-328 “Cougar” capabilities as presented at a May 2015 Special Operations Forces Industry Conference.

America’s ‘other air force’ belongs to the Department of State Air Wing, a hodgepodge of more than 200 mostly vintage aircraft that includes everything from OV-10 Broncos to ancient DC-3s turboprops. The relatively modern and very modified ‘DoJet’ seen in these exclusive photos is apparently part of their stable.

The Fairchild-Dornier 328 family of aircraft, although not an ongoing commercial success with 327 of the type having been built before 2002, has found a big following in the US Special Operations community, which flies 17 of the turboprop versions of the aircraft. Known as the C-146 “Wolfhounds” by the USAF, these clandestine aircraft are often seen wearing civilian-style ‘low-profile’ paint schemes and are deployed all over the world to provide intra-theater logistical support for special operations forces.

The Department of State’s aircraft in question is a turbofan powered 328Jet model of the Fairchild-Dornier 328 family, of which 110 were built. The aircraft seems to be in a similar configuration to Australia’s Maritime Safety Authority’s Turboprop powered 328s. These aircraft are equipped with a multi-mode pulse doppler radar built by Israel’s Elta, as well as a Star SAFire III Forward Looking Infra Red turret near the left main landing gear housing. These aircraft also have an infrared line-scanner, as well as the ability to drop large items through the aircraft’s lower emergency hatch and through a cargo door that is operable in-flight.

Beyond the FLIR turret, it is unclear if the DOSAW’s 328Jet has all these upgrades, or possibly many more, but one thing that the State Department’s ‘DoJet’ has that the Australian Maritime Authority’s 328s don’t, is a large satellite communications installation along the spine of the aircraft. Often times, these installations allow for secure communications and streaming video to be sent anywhere in the world, which would indicate that this aircraft has a prominent communications amd/or command and control role.

As far as what this aircraft’s true mission may be, it remains unclear. Maybe it works as part of the Bureau of International Narcotics and Law Enforcement Affairs (INL) to chase drug traffickers and nacro-terrorists in South America, or maybe it operates as a high-priority transport for State Department officials. It is unlikely that the jet was procured to operate in areas where Man Portable Air Defense Systems are prevalent, such as in Iraq and Afghanistan, as the aircraft lacks missile launch detectors (MLSs) and any visible infrared countermeasures of any kind.

The Fairchild-Dornier 328 is a gorgeous aircraft that looks more organic than mechanical in nature, as if they are grown not built. So whatever this new shadow jet’s mission truly is, it will look brazenly futuristic and elegant among the C-27s, Ch-46s, Air Tractors, Hueys and other workhorses at the DOSAW’s base at Patrick AFB near Cocoa Beach, Florida.

Tyler Rogoway is a defense journalist and photographer who maintains the website Foxtrot Alpha for Jalopnik.com You can reach Tyler with story ideas or direct comments regarding this or any other defense topic via the email address [email protected]