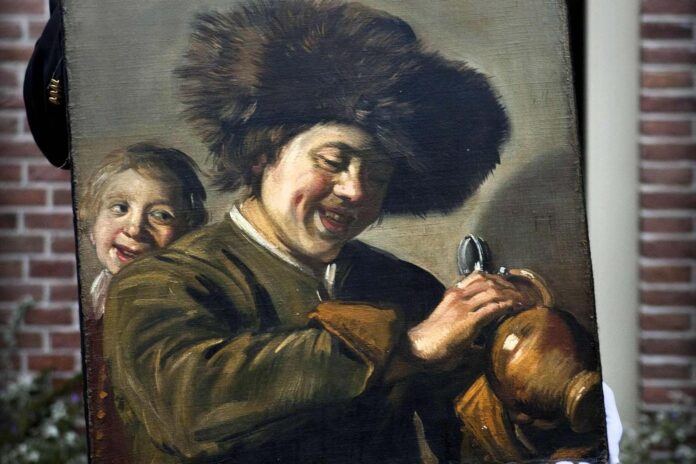 Allowing a Dutch masterpiece to be stolen from directly underneath your nose once is careless. Allowing it to be stolen for a second time is criminally incompetent. We don’t even know what to call the idea of allowing the same thing to happen for a third time, but we’re going to have to think of a term because that’s precisely what’s happened. For the third time since “Two Laughing Boys” was painted in 1626, the priceless work of art has been taken by thieves. Its whereabouts are currently unknown, but Dutch police are looking into the matter urgently.

When you think about Dutch painters, the first artist that comes to mind is Vincent van Gogh. That’s not surprising. The painter was mostly unknown in his lifetime, but became infamous after his death not just because of the brilliance of his post-impressionist creations, but also because he cut his own ear off. That grisly fact has led to a long fascination with the painter by the public; one that’s reflected by the unlikely existence of an online slots game based on the artist’s life and works known simply as ‘Van Gogh.’ Americans can praise the work of artists like Andy Warhol and Jackson Pollock as much as they like, but neither of them has a presence at online slots websites. Leonardo da Vinci does,the game is even as famous as Fishin frenzy megaways, though, and that means van Gogh is in good company. Van Gogh wasn’t the master behind “Two Laughing Boys,” though. That 17th-century artist’s name was Frans Hals, and for the record, he doesn’t have his own online slots attraction either.

Given the wide range of technology and security provisions available to museums in the modern age, it’s tempting to imagine that sophisticated systems and safeguards protect precious works of art and that any attempt to steal them must be a highly specialized and coordinated operation. That doesn’t appear to have been the case in this instance. The painting, which is said to have a value of around seventeen million dollars, seems to have been taken by the time-honored criminal method of breaking into an art gallery, pulling it off the wall, and running away into the night through the back door. It was on the walls of the Leerdam museum in Utrecht, Netherlands when the robbers gained entry in the early hours of August 26th. The forced entry set off an alarm, but the burglars were long gone by the time the police arrived. Aside from the alarm, there were no other security provisions in place at the museum. Despite its value, the painting wasn’t inside a glass case or subject to any other protections. The museum has declined to comment on how or why the masterpiece had been left in such an easy-to-steal predicament.

The first time the painting was taken was in 1988 from a different museum. On that occasion, it remained missing for three years before it was eventually recovered alongside a Jacon van Ruisdael piece that had been taken at the same time. Twenty-three years later, the painting was stolen again, this time from the Hofje van Mevrouw van Aerden museum. That time it was missing for six months before the police were able to track it down and recover it. They’ll be hoping to make faster progress on the case this time around, and are currently studying CCTV in the hope it will allow them to identify suspects. In the meantime, art dealers and police sources warn that further art thefts are inevitable because of a strange trend emerging in the Netherlands.

Since the 1990s, high profile criminals in the country have kept stolen artwork as a form of insurance in case they’re ever arrested and charged with a crime. If they’re facing a jail sentence, they will offer to return the paintings in return for preferential treatment or a better plea bargain. This is how Kees Houtman, a prolific drug dealer, managed to avoid a lengthy sentence during the 1990s by presenting with the authorities with a long-lost piece by van Gogh. Another stolen van Gogh from the artist’s named museum in Amsterdam was also provided by an Italian crime boss in 2002 and again resulted in a shorter sentence. The tactic works – or is at least perceived as a working option by criminal figures – and so it’s likely that valuable works of art are being targeted and stolen to order.

This isn’t the only significant or valuable work of art to go missing in the Netherlands in 2020. Van Gogh is the most obvious artist to target because of his cultural value and significance in his home country, and his lesser-known painting ‘Spring Garden’ was taken from Laren’s museum in March this year. That museum isn’t far from Leerdam. Police haven’t ruled out the possibility that the two crimes are linked, and thus far, ‘Spring Garden’ is still missing. It would be impossible for the criminals who’ve taken the pieces to sell them on the open market because they’d be detected immediately, and even the black market would be risky. The buyers of the paintings would likely be aware that they were buying stolen goods that would be reclaimed the moment they were found, and the sellers could never be sure that they weren’t dealing with undercover law enforcement officers. Keeping the paintings as insurance as opposed to looking to sell them on for a profit appears to be a much more likely motive, no matter how strange the concept might be outside of the Netherlands.

Publicly, the Dutch government has said that it will never pay criminals for the return of stolen paintings, and nor would it sanction or condone judges or police officers offering reduced sentences or dismissed charges in return for stolen artworks being handed over. In practice, such decisions are in the hands of the police and the judges, who may not be as steadfast in their views. This spate of thefts might come to an end the first time a criminal realizes that their ill-gotten art can’t buy them anything, but paintings will probably continue to be targeted until then.

Perhaps it’s time to twist an old saying to coin a new one: “Fool me once, shame on you. Fool me twice, shame on me. Fool me three times; I must work in a Dutch art gallery.”