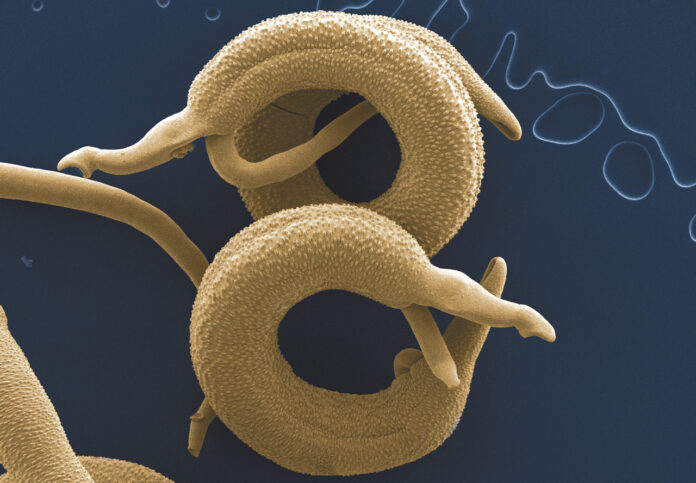 Parasitic infection is a common health issue that often goes unnoticed. Often times a parasitic infection will show no symptoms. In other cases, the symptoms can be so diverse that it can be hard to trace them back to parasites as an underlying cause. Issues like brain fog and fatigue, bloating, diarrhea, digestive issues, skin rashes, muscle pain, anxiety, and numerous others can have parasites as an underlying cause.

A parasite is simply an organism that lives in or on a host organism and receives its nutritional needs from that host. There are three major groups of parasites that effect humans—helminths (parasitic worms), protozoa (single-celled organisms), and ectoparasites (lice, fleas, etc.). In this article, we’ll explore one of these groups in detail—helminths.

Helminths are parasitic worms. They are often referred to as “soil-transmitted helminths” as they typically are transmitted to humans by ingesting soil contaminated with microscopic helminth eggs by eating unwashed produce or by walking barefoot on the contaminated soil. Some parasitic worms, however, are not transmitted by soil, such as schistosomes, which are contracted by consuming contaminated water. The most common types of helminth infections are: roundworm (ascariasis), pinworm, whipworm, and hookworm.

The first type of helminth we will discuss is Ascariasis lumbricoides, also known as roundworm. This is the most common type of parasitic infection, and it is estimated that nearly one billion people on earth are infected with roundworm. The microscopic eggs of Ascariasis lumbricoides can’t become infective without coming into contact with soil. People can accidentally ingest contaminated soil through hand-to-mouth contact or by eating unwashed and uncooked fruits or vegetables that have been grown in contaminated soil.

Once consumed, larvae hatch from the eggs in your small intestine and then penetrate the intestinal wall to travel to your lungs via your bloodstream or lymphatic system. After maturing for about a week in your lungs, the larvae break into your airway and travel up your throat, where they’re coughed up and swallowed.

Once back in the intestines, the parasites grow into male or female worms. Female worms can be more than 15 inches (40 centimeters) long and a little less than a quarter inch (6 millimeters) in diameter. Male worms are generally smaller. Male and female worms mate in the small intestine. Female worms can produce 200,000 eggs a day, which leave your body in your feces. The fertilized eggs must be in soil for at least 18 days before they become infective. The whole process — from egg ingestion to egg deposits — takes about two or three months.

These worms are parasites that use your body as a host to mature from larvae or eggs to adult worms. Adult worms, which reproduce, can be more than a foot (30 centimeters) long. Most people infected with ascariasis have no symptoms, though moderate to heavy infestations cause various symptoms, depending on which part of your body is affected.

Pinworm infection occurs most often in school-age children, and the microscopic eggs are easily spread from child to child. Treatment involves anti-parasitic formulas that kill the pinworms and thorough washing of pajamas, bed linens and underwear. For best results, the entire family should be treated.

Whipworm (Trichiuris trichiuria) is another type of helminth that people are commonly infected by. There are approximately 600 to 800 million people in the world infected with whipworm.

Whipworm is transmitted in the same way as roundworm, however, the symptoms of a heavy whipworm infection are more obvious and serious than roundworm. You may experience frequent and painful bowel movements which contain mucus or blood. You can even experience rectal prolapse or become anemic due to whipworm.

A whipworm infection can develop after ingesting water or dirt contaminated with feces containing whipworm parasites. Anyone who has come into contact with contaminated feces can also contract a whipworm infection. The infection most often occurs in children. It is also more common in people who live in regions with hot, humid climates and in areas with poor hygiene and sanitation. This type of infection can also occur in animals, including cats and dogs.

Finally, we have Necator americanus also known as hookworm. Zoonotic hookworms are hookworms that live in animals but can be transmitted to humans. Dogs and cats can become infected with several hookworm species, including Ancylostoma brazilense, A. caninum, A. ceylanicum, and Uncinaria stenocephala. The eggs of these parasites are shed in the feces of infected animals and can end up in the environment, contaminating the ground where the animal defecated. People become infected when the hookworm larvae penetrate unprotected skin, especially when walking barefoot or sitting on contaminated soil or sand. This can result in a disease called cutaneous larva migrans (CLM), when the larvae migrate through the skin and cause inflammation.

There are between 576 and 740 million people in the world with hookworms. Hookworms live in the intestines just like whipworms and roundworms. However, unlike other helminths, hookworms can actually penetrate your skin. People infected with hookworms might show signs of anemia or protein loss.

The subject of parasites is vast, and the protocols for treating parasitic infections can also be diverse. However, the most effective and time-tested way to rid the body of parasites is to do a parasite detox cleanse. This can be done by using an herbal supplement like Zuma Nutrition’s Parasite Detox tonic (Shop Now), pairing that with a binder like fulvic acid, and by following an anti-parasite diet that involves eating anti-parasitic foods, eating foods high in fiber to assist with elimination, and avoiding foods that hinder the detoxification process. Following this protocol for one month may help the body eliminate over 100 different types of parasites—including various helminth infections.

Parasites are not a pleasant reality, but they are a reality nonetheless, and one that is much more common than most people acknowledge. Helminths are parasitic worms, and they are just one of three major classifications of parasites. The most common helminth infections are roundworm, hookworm, whipworm, and pinworm. As with most parasitic infections, helminth infections may be treated by following a parasite detox protocol including herbal parasite-killing supplements and an anti-parasitic diet.