Home World Dying and Rising Gods in the Ancient Near East 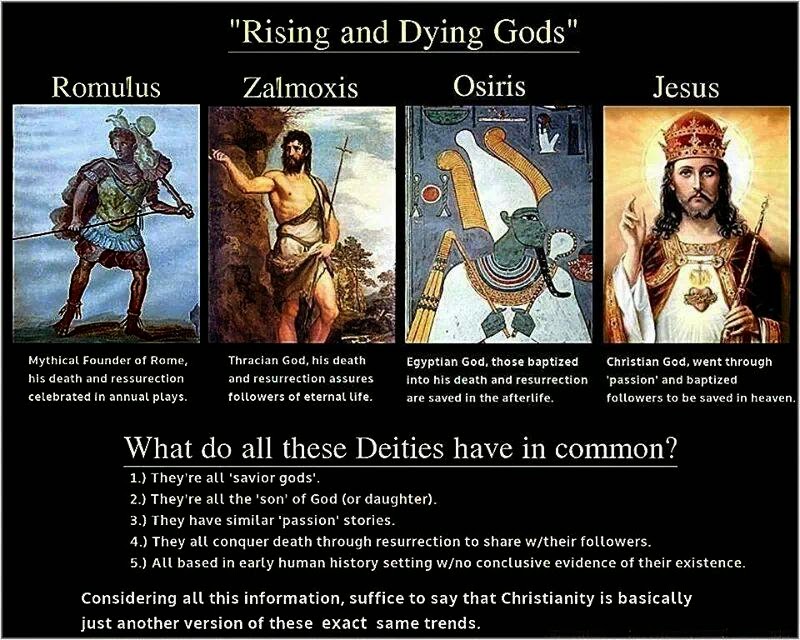 Daniel J. Flynn argues in his book Intellectual Morons that “When ideology is your guide, you’re bound to get lost. Ideology deludes, inspires dishonesty, and breeds fanaticism. Facts, experience, and logic are much better at leading you to the truth. Truth, however, is not everyone’s intended destination…Ph.D.s, high IQs, and intellectual honors are not antidotes to thick-headedness.”[1]

Sadly, I have personally found this to be true over the years. I’ve interacted with historians, scholars and writers of various stripes and I have been literally stunned by how they have no respect for serious scholarships, rigorous investigation, and ultimately a love for the truth.

Moreover, I have been amazed to see how they tried to get around the obvious in order to preserve their cherished ideology. I later found out that some of them would astonishingly invent things out of thin air in order to rescue their own ideology from historical oblivion.[2] This has been one of my frustrations because you simply cannot reason people out of an ideology which was not form on the basis of reason.[3]

I have interacted with Ashraf Ezzat in the past, and I am still amazed at how a man of his statue would put his credibility on the line by making fantastically risible statements and by relying on shaky foundations. Here are a few examples from his new article:

“Contrary to what western orientalists and scholars have for so long believed, Messiah has absolutely nothing to do with Jesus Christ or Western spirituality for that matter…

“At the core of this whole Messianic culture is ancient Arabian/tribal tradition intimately interwoven with pagan myths.  During the centuries leading up to the birth of Christianity various cults known as `Mystery Religions‘ had spread throughout the Pagan world.

“At the center of these Mystery cults was a story about a dying and resurrecting godman who was known by many different names in many different cultures.

“In Egypt, where the Mysteries originated, he was known as Osiris, in Greece as Dionysus, in Syria as Adonis, in Italy as Bacchus, in Persia as Mithras. These Pagan myths had been rewritten and interwoven with the theme of the Arabian Messiah as the gospel of Jesus Christ. Without that subtle blend the Arabian Messianic culture couldn’t have managed to seep into and take root in western Psyche and spirituality.”

This is really bad, so bad in fact that Ezzat is actually insulting honest skeptics and serious researchers out there. A few years ago, I interacted with David Turner of the Jerusalem Post on this very issue. Turner appealed to the new ridiculous view that maybe Christianity drew its conclusions from “mystery religions and the man-god Osiris-Dionysus,”[4] a notion that is quite common among popular people such as Dan Barker and Timothy Freke and Peter Gandy.

The notion was also the locus of the almost defunct documentary film Zeigeist, a propaganda film widely recognized by many atheist writers and skeptics for its “fuzzy thinking,”[5] its “nonsense,”[6] its “implicit deception,”[7] and even its “crap.”[8]

The notion that the historical Jesus is similar to mystery religions such as Bacchus, Dionysus, Osiris, etc., and that Christianity probably emulated those religions, is so preposterous—and quite frankly, historically irresponsible—that one needn’t be an historian or scholar to say that it is completely crazy.

Osiris for example was the son of Nut, the sky-goddess, and Geb, the earth-god. Nut was an adulterer and was formerly the wife of the Sun. While Osiris was inside Nut’s womb, he fell in love with his sister Isis, with whom he had sexual intercourse and produced a child named Horus. Nut also had other offspring, whose names were Nephthys, Set, etc.

After their birth, Osiris again had sexual intercourse with Nephthys, the wife of his brother, Set. Filled with anger and rage, Set ended up drowning Osiris in the Nile River and cutting him into 14 pieces. Isis found the pieces but could not find the last one, Osiris’s sexual organ. As a result, she reconstructed it with pieces of wood and began to have sexual intercourse with him. The mythological story goes on and on.[9]

Likewise, Dionysus was the Greek god of wine and revelry, madness, and ecstasy, which also encompasses religious dance and, according to Herodotus, demon possession.[10] This was one reason why Nietzsche favored Dionysus over the Christian God because Dionysus, according to Nietzsche, would bring about the transvaluation of all values, including sexual values. Nietzsche introduced the idea in The Birth of Tragedy, first published in 1871 (the year in which Darwin published The Descent of Man), and moved on to expand on it in nearly all his other writings.[11]

“But I say, that the things which the Gentiles sacrifice, they sacrifice to devils, and not to God: and I would not that ye should have fellowship with devils, Ye cannot drink the cup of the Lord, and the cup of devils: ye cannot be partakers of the Lord’s table, and the table of devils. Do we provoke the Lord to jealousy? Are we stronger than he?” (1 Corinthians 10:20-22).

Now we are being told that Christianity borrowed from the myths mentioned earlier! Moreover, when Paul was on top of Mars’ Hill, when he mentioned the resurrection to the pagan philosophers and thinkers, “some mocked, and others said, We will hear thee again of this matter” (Acts 17:32). As one writer has pointed out, they could have just said something like, “This sounds like the stuff we have read from Homer and others. No difference.”

Here is another interesting point. Christians, from the first century and all the way to the fourth century, were killed, tortured, decapitated, thrown to the lions, for believing in monotheism and were even called “atheists” for rejecting the very essence of the Osiris-Dionysus-Bacchus and pagan worship, and now we are being told that they got their ideas from mystery religions! Isn’t that something? Is that sober and sound scholarship?

Ancient historian Manfred Clauss of the Free University of Berlin argues that it does not make any sense to interpret the mystery religions “as a forerunner to Christianity.” He adds,

“Mithraism was an independent creation with its own unique value within a given historical, specifically Roman, context.”[12]

Likewise, scholar of antiquity Edwin M. Yamauchi argues that Mithraism could not have influenced Christianity in any theological or historical context for the very reason that Christianity is older than Mithraism and the texts for Mithraism are dated after A.D. 140.

Moreover, what is made available to scholars is only dated from the second, third, and fourth centuries A.D. In a similar vein, other scholars and archeologists such as Richard Gordon declare that the story of Mithraism was not popular until the reign of Hadrian.[13] In other words, the historical evidence for mystery religions in first-century Palestine is non-existent.

Moreover, mystery religions were secret cults and operated within two basic principles: “The injunction to silence, intended to prohibit ritual details from reaching the outside world; and the promise of salvation to the initiates.”[14] In other words, they were forerunners of Freemasonry. Yet both Jesus and Paul, when they were on trial, declared that they did nothing in secret (John 18:20; Matthew 10:26-27; Acts 26:26). In the words of Oxford scholar E. J. Yarnold,

“The fervor with which historians used to detect wholesale Christian borrowings from the Mithraic and other mysteries has now died down.”[15]

In a similar vein, Oxford historian Robin Lane Fox denounced those who draw parallels between Christianity and pagan religions as irresponsible.[16] Others scholars such as L. Patterson and Gary Lease have made similar remarks.[17]

Interestingly enough, the idea that Christianity borrowed from pagan religions was started by none other than Richard Reitzenstein (1861-1931), a German Jewish classical philologist who started the History of Religions School in Germany.[18] Then the idea began to mutate in the minds of other Jewish scholars such as Hugh J. Schonfield who wrote Those Incredible Christians.

Then it progressively migrated into a book that is known only to scholars named The Golden Bough, by James Frazer (1854-1941).[19] Then popular authors began to adopt the idea and spread it into the cultural landscape.

Timothy Freke and Peter Gandy’s The Jesus Mysteries and Tom Harpur’s The Pagan Christ are classic examples. Yet the story became even problematic for those mythicists when their theories are confronted with a core historical claim.[20]

Moreover, the mythicists’ comparison between Christianity with Mithraism is a terrible non-sequitor. For example, Jesus was born of a virgin, but Mithras was born out of a rock![21] And all through the early centuries, the early church fathers pinned Mithraism as a satanic cult. All through the New Testament, Christians are told to “keep yourselves from idols” (1 John 5:21). In Athens, Paul’s “spirit was stirred in him, when he saw the city wholly given to idolatry” (Acts 17:16).

Yet now we are being told that the early Christians borrowed from those satanic cults. It simply boils down to fanciful speculations, some of which are summoned deliberately. As scholar Ronald H. Nash pointed out,

“The uncompromising monotheism and the exclusiveness that the early church preached and practiced make the possibility of any pagan inroads…unlikely, if not impossible.”[22]