A Feature Documentary That’s as Compelling as Any Fictional Drama!!!  WATCH TRAILER

Body of War is a documentary following Tomas Young, an Iraq War veteran paralyzed from a bullet to the spine, on a physical and emotional journey as he adapts to his new body and begins to question the decision to go to war in Iraq. From soldier to anti-war activist, the film takes an unflinching view of the physical and emotional aftermath of war through the eyes of an American hero. The film unfolds on two parallel tracks. On the one hand, we see Tomas evolving into a powerful voice against the war as he struggles to deal with the complexities of a paralyzed body. And on the other hand, we see the historic debate unfolding in the Congress about going to war in Iraq.

Body of War runs a bit less than 90 minutes but the experience of seeing it makes the time fly by so that one is surprised to see the closing credits. 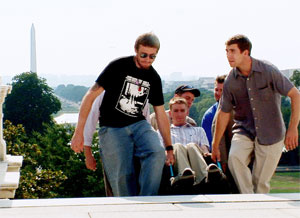 This fine film is so much more than the conventional "war documentary". The story of Tomas Young and his family is masterfully interwoven with scorching snippets from the Senatorial voting process that authorized Bush’s invasion of Iraq in such a way as to make the personal and the political mesh to the point of implosion.

Body of War is an extraordinary document that focuses on the experiences of Tomas Young in such a way that one can begin to imagine how many tens of thousands of severely wounded American veterans (and their families) must be going through similar trials. This is a movie that is projected as much on your heart as on the screen.

I put it to you that unless you or someone in your immediate family has been there, and come back with major lifelong damage, you can’t fully appreciate the human costs of this war.

Seeing "The Body of War" is about as close as you can get to beginning to feel what the wounded vets and their families feel.

This review doesn’t say much about the existential content of the film, and that’s intentional. The twists and turns are all the more telling if they are surprises.

The editing is sharp and potent. The music, especially the two new songs by Eddie Vedder, works in profound harmony with the powerful images on the screen. There is no doubt that Body of War will be in contention for an Oscar next year. It’s that strong.

Whether one is for or against this war, I put it to you that you must go see this movie. This is what our tax dollars are paying for and where America’s blood and guts are being spent lavishly. The least we can do is bear witness to this heart wrenching/eye opening story.

I was privileged to see Body of War at a preview that Phil Donahue recently presented in Washington DC. He spoke briefly before the movie and graciously took audience questions and comments afterwards. 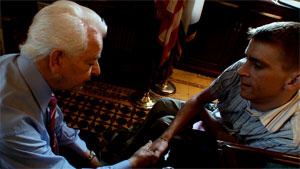 This important movie was clearly a labor of love for him and for co director and film maker Ellen Spiro. Donahue made clear that he would not be taking any profits from this film.

I urge you all to go to the website http://www.bodyofwar.com/ and see if this will be any where near you in the coming months; and if it isn’t…contact your local theater owner and request that it be screened. Once you’ve seen it; you’ll want others to see it too.

View Details on Cast and Crew at IMDB