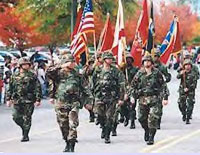 Riverside police Sgt. George Masson can see it coming. He remembers what it was like 27 years ago when he joined the force.

"When I first got into police work, I recognized that the people we were often dealing with were the Vietnam vets," Masson said. "People that came back that were hurt. People who came back with certain emotional problems."

"Seeing what our country’s in now and seeing some of the people rotating out (of the military), I said, ‘This is going to happen just like Vietnam did.’ "

Nearly 50 police officers from several Inland agencies, including the cities of San Bernardino and Corona and the unincorporated Riverside County community of Menifee, heard presentations by members of the American Combat Veterans of War, a La Jolla-based nonprofit group.

Co-founder Mike Sloan said the veterans group was initially formed in 2001 to help older veterans navigate the Department of Veterans Affairs system more effectively. Now the group is focused on supporting newer vets who are readjusting to civilian life after returning from Afghanistan or Iraq.

Sloan says his organization has worked with personnel at Camp Pendleton and the VA hospital in La Jolla. But this is the first time it has presented a program to a civilian police group.

"What amazed me is that the police force had taken the initiative and was thinking about how to deal with it before they were confronted with it," Sloan said.

Sloan says it’s important for police to understand that veterans with mental issues have a different frame of mind than most criminals.

"Typically a combat vet has already planned through and run a mental scenario," Sloan said. "His fear level is not as high."

He also may be more responsive to authority.

"Often they’re just looking for acceptance," Sloan said. Establishing communication in a confrontational situation is critical, he added. Asking basic question such as "Where did you serve?" or "Who did you serve with?" can initiate that link, he said.

"If there are Iraqi or (Afghanistan) vets or even Vietnam vets getting involved in domestic violence, knowing how to calm them down or understand some of the military traumas is really going to help out," Duk said.

While many domestic violence situations relate to infidelity or control issues, Duk said, a veteran’s stress can be aggravated by something as simple as seeing military deaths reach a new milestone.

Knowing that kind of mindset, he said, "might give some options as to why this guy is acting this way. It could be vital in anticipating why (he) would be so angry."

He said he hasn’t yet seen a large increase in calls involving war veterans. But in January, officers responded to a veteran threatening to commit suicide by jumping from a bridge. They were able to persuade the man not to jump.

In dealing with any conflicts with a veteran, he said, "We have to get past what triggered the crisis and assure him we’re there to help him out. We see him as a person in crisis."

The opinions expressed on Veterans Today are those of the authors and do not necessarily reflect those of the staff individually or as a whole.