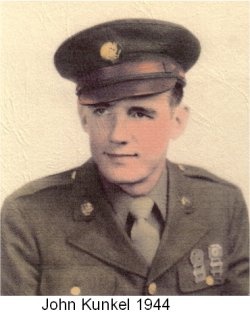 While in high school, my daughter, Kara, was employed at a little restaurant on Derr Road, called Suzi’s. One night she came home and told me that I just had to meet this older gentleman who came in frequently in the afternoons to eat. Knowing my interest in WWII veterans and especially certain battles in that war, she revealed to me that he was in the Battle of the Bulge.

That was all it took. His name was John Kunkel and I agreed to meet with him. This was the beginning of a long and endearing friendship.

I went many times afterwards to visit John at his home in Northridge, and then to Oakwood Village (a retirement community), when he moved there. One morning, I picked John up in my van and we drove to meet other veterans at the Springfield Airport.

I had heard that some old WWII planes were coming in that day. When we arrived, we watched as a B-17G, a C-47, and a P-47 flew in and landed right in front of us. He really enjoyed that.              John was not reluctant to tell me about his time in the service, for he thought people needed to know what war was like, and to get information from someone who had been there, and John had definitely been there! 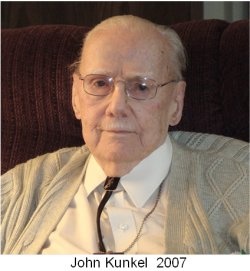 John entered Europe just after D-Day through Le Harve, France. He was then transported to St. Mere Eglise, and from there he went through St. Lo, the hedgerows of Normandy, and finally entered into the Hurtgen Forest on November 16, 1944. John told me that when he was at St.Lo, the whole place had been leveled by artillery shelling, and that nothing was left standing except an old church. I happened to locate that same church when I was in France in 2004 with the 29th Infantry Division for the 60th Anniversary of D-day. There was an artillery shell still embedded in the side of that old church. It had never been removed. I took a picture for John. He just could not believe it when I showed him a picture of the very same church he had seen so many years ago as a young soldier. He just stared and stared at that picture.

Now, I knew about the beaches of Normandy, and the Battle of the Bulge, but up until this point, I had never even heard of the Battle in the Hurtgen Forest! John was very emphatic when he told me that of all his experiences in the war, fighting in the Hurtgen Forest was, by far, the worst! I began to listen to his descriptions of the forest and what happened there, and I also read articles on this battle that seemed to have eluded me in my studies of WWII. What I discovered simply astounded me. 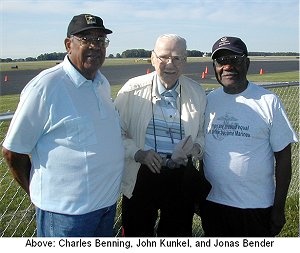 The Battle of the Hurtgen Forest had lasted a total 90 days and involved nine American Divisions and their supporting units. More than 24,000 Americans lost their lives, averaging 267 men a day, and there were another 9,000 casualties from trench foot, disease, and combat exhaustion. John was wounded from an artillery blast on December 4th,1944, but made it back to his unit in time to fight in ‘The Battle of the Bulge’ in the Ardenne Forest.

John was wounded a second time on Dec. 22nd, 1944, when he and his patrol were watching a river crossing, using a French Chateau for shelter. He was blown out into a snow drift, along the banks of the Moselle River, from an artillery shell that came smashing into the chateau. He was entering the chateau and was about to yell at his men to get out of the there when the shell hit. All five of his men were killed. There happened to be two medics just down the road and witnessed the shelling and ran to find John in a snow drift. At first, they thought him dead, but because one of his eyes was lying outside its socket and blood was pulsing from inside, one of the medics realized he was alive. As John described it, the medic simply licked his fingers, pushed the eyeball back into the socket, and secured it with a patch. His eye is working fine to this day. 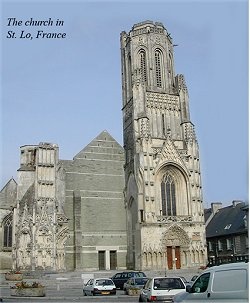 Through his travels and experiences John met several interesting people and one of those that he met was Ernest Hemingway, but he did not care for him at all.

John also said that he was not only trained as a sniper, but he was a self taught barber, who cut any soldier’s hair that would pay him, so he became affectionately known as “the snippin’ sniper”.

John is a devout Christian man, who has authored a book, written published poetry, and at one time built many intricate pieces of miniature furniture that have been displayed and sold all over the world. He still has many pieces on display in his china cabinet that one may view.

John has earned two Purple Heart Medals, two Bronze Stars, a Combat Infantry Badge, and various other medals and citations. It took John 47 years to get his army records, because his records, along with others of his unit, were buried in the Hurtgen Forest, and were not recovered for years. They were buried because it was believed that they would soon be overrun by the Germans, and they did not want any personal records to fall into enemy hands.

John said there is one thing that he would like to get out of his mind; the horrible things he saw at Malmedy. He said that he hoped that history would never forget it, nor the 101st Airborne at Bastogne, who were surrounded there and held the line against unbelievable odds. 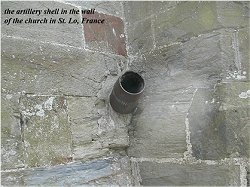 Malmedy was the site of a brutal German massacre on December 17th , 1944, that left 71 soldiers dead and 21 wounded survivors. The soldiers were being held prisoner and unarmed.

John remains to this day, one of my dearest friends, and I never tire of hearing his stories, or laughing at his wit and humor.

To many folks, John is just an old man in a retirement community, whom many people pass, never knowing what an incredible man he is or what amazing experiences he has had.  For me, John will always be much, much, more. 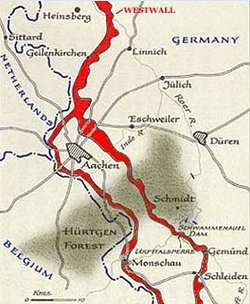