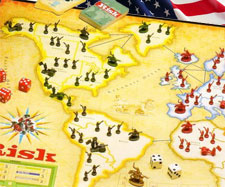 Although the U.S. is not in imminent danger of attack from any country, President Obama’s first budget further expands the Pentagon’s already dominant global operations.

Not even the prospect of a $3.1 trillion combined budget deficit for this year and next deters him. Let them chop the budget for black colleges and police officer death benefits, the Pentagon and its contractors continue to feast at the champagne-and-caviar table.

It’s not as though for eight years the Bush Pentagon hadn’t nearly outspent the rest of the world combined on designing deadlier weapons and employing them in illegal wars.

Obama’s new $664 billion Pentagon budget is $21 billion higher (four percent) than the final Bush budget. It includes $65 billion for Afghanistan and $61 billion for Iraq. Why?

Well, here’s what Defense Secy. Robert Gates told the Naval War College April 17th: “The U.S. must not take its current dominance for granted…its battle fleet, by one estimate, is still larger than the next 13 navies combined—and 11 of those 13 navies are U.S. allies or partners.”

(Get that? “Larger than the next 13 navies combined.” What’s more, nearly every world power is our buddy. So where’s the urgent need to spend billions on expansion? And notice his use of the word “dominance.”)

Gates went on to boast, “In terms of capabilities, the over-match is even greater. No country in the rest of the world has anything close to the reach and firepower to match a carrier strike group. And the U.S. has and will maintain 11 at least until 2040.”

Gates  seeks an incredible 2,400 new Joint Strike Fighter planes when the U.S. already is undisputed master of the skies. Think of that: 2,400 warplanes in the absence of an enemy!

At 100 million bucks a pop, that air armada will cost taxpayers over $240 billion.

As Sheldon Filger wrote in the May 16 Huffington Post of the Pentagon’s fiscal 2009 outlay: “This stratospheric expendure is equivalent to the combined totals for the next 25 largest military budgets on the planet.”

RIGHT: To get some idea of the perennial lopsided U.S. military spending requires only a  glance at the latest figures from the National Priorities Project of Northampton, Mass.

The Pentagon claims it needs to be able to fight two wars at once.  However, if it did not go around starting wars it would be hard-pressed to find one. From what quarter does Gates expect an attack? Iran, with a puny military budget 1/100th our expenditure? Recall the last successful strike on U.S. soil was achieved not by a great army wielding sophisticated weapons but by a handful of terrorists with box cutters who hijacked airliners and used our own jet fuel for explosives. Yet the Pentagon expands as if gearing up to fight WWII.

“President Obama’s budget continues the decade-long uptick in Pentagon spending, which has grown by approximately 40% since 2000,” observes military policy analyst Travis Sloan of the Center For Arms Control and Non-Proliferation.

He notes the Obama budget “appears surprisingly large at first glance, especially in this economic climate.” Yet he sees reason for optimism as he believes Obama “will institute critical foreign and defense reforms that will make us safer and spend our money more wisely.” That’s his view.

Obama’s Pentagon budget, however, is certainly not going to make the people of Afghanistan safer.  His buildup there comes as Afghan President Hamid Karzai pleads in the strongest terms “for the U.S. to halt air strikes in his country, following attacks…that Afghan officials said killed 147 people,” Reuters reported. “We demand an end to these operations…an end to air strikes,” Karzai told CNN. (Demand? Puppets don’t pull strings.)

Defense Secretary Gates informed West Point cadets April 21st that Afghanistan is about “striking back at the staging ground of the perpetrators of the September 11th attack,” claiming “Afghanistan is widely viewed as a war of necessity.”

In fact, USA Today reported just a month earlier that public support for that conflict “has ebbed to a new low,” according to a Gallup Poll. Americans who regard the attack on Afghanistan as “a mistake” had increased from 9% in 2001 to 42%, a sea change Gates conveniently chooses not to credit.

Gallup also discovered a shift in public opinion from March, 2007, when it asked if the U.S. was spending too much or too little on defense. Forty-three per cent responded “too much” compared with 20 percent who replied “too little.” A decade earlier most Americans didn’t think the Pentagon was on a spending binge with their taxes.

A like situation afflicts Pakistan, as the U.S.-made Afghan war spills over its borders. According to AP,  “Using unmanned aircraft, American forces have carried out dozens of missile attacks in northwestern Pakistan over the last year. U.S. officials rarely confirm the attacks, but say they have killed a string of al-Qaida commanders. Pakistan’s government has publicly protested the tactic, arguing that it kills too many civilians and undermines its efforts to turn tribal leaders away from hard-liners.” The UN says 1.5 million Pakistanis have fled their homes, a repeat of the Afghan exodus.

America’s Afghan war “is not self defense,” writes international law authority Francis Boyle in his new book, “Tackling America’s Toughest Questions”(Clarity Press). “Let’s be honest. We all know it. At best this is reprisal, retaliation, vengeance, catharsis…(it) constitutes armed aggression. It is illegal. There is no authority for this. It is creating a humanitarian catastrophe for the people of Afghanistan.”

Boyle recalls that then Secretary of State Colin Powell promised to produce a “white paper” documenting their case against Osama bin Laden and Al Qaeda but never did, and that Bush failed to get a UN resolution authorizing military force in Afghanistan.

The Pentagon’s aim, he says, is to “direct military control of 50 percent of the world’s oil supply” in the Persian Gulf region, which the Fifth Fleet was “set up in Bahrain to police, dominate, and control.”

Can the Department of Defense operations be construed “defensive” when it is operating more than 1,000 bases abroad and those 11 mobile carrier attack fleets? According to author Hugh Gusterson, writing in The Bulletin of The Atomic Scientists of March 10th: “These thousand bases constitute 95 percent of all the military bases any country in the world maintains on any other country’s territory. In other words, the United States is to military bases as Heinz is to ketchup.” (If only the Pentagon spilled just that!)

Few realize the Pentagon’s collection of bases makes it the world’s biggest landlord, about 30-million acres. Excluding Afghanistan and Iraq, USA spends $102 billion a year just to run its overseas bases, according to Miriam Pemberton of the Institute for Policy Studies.

The Pentagon justifies its appetite for, say, 227 bases in Germany in terms of making the U.S. more secure. In fact, though, “Such forward basing of forces,” writes James Carroll in House of War(Houghton Mifflin), “was designed to control, by means of ‘regime change’ and ‘prevention,’ emerging political trends around the globe, with the unabashed goal of guaranteeing U.S. dominance everywhere.” Indications are the American war machine has triumphed over its closest adversary: the State Department. As Reuters  columnist Bernd Debusmann wrote May 14th, “The U.S. armed forces, the world’s most powerful, outnumber the country’s diplomatic service and its major aid agency by a ratio of more than 180:1, vastly higher than in other Western democracies. Military giant, diplomatic dwarf?”

Debusmann goes on to say, “In terms of money, the U.S. military towers just as tall. Roughly half of all military spending in the world is American. Even potential adversaries in a conventional war spend puny sums in comparison…China’s defense budget is $70 billion, Russia’s around $50 billion.”

The picture emerging is ugly. No “victory” in its spreading wars in Afghanistan, Pakistan or Iraq ever will begin to compensate for the vast numbers of Middle Eastern folk needlessly maimed, killed, displaced, and pauperized by U.S. military aggression. “Aggression” is the only word for it and the Middle East’s oil supply is the only reason for it. The Pentagon is on its way to tighten its control of the world—with the help of our newest imperial president’s enabling budget. The American Warfare State marches on!

Sherwood Ross is a Miami-based writer who formerly worked in the civil rights movement and for major dailies and as a wire service columnist. Reach him at [email protected]