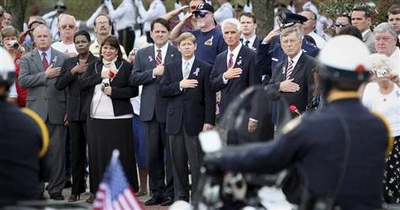 Capt. Speicher’s remains were found 18 years after his jet was shot down

JACKSONVILLE, Fla. – Navy pilot Scott Speicher, the long-missing first casualty of the first Gulf War, was finally laid to rest Friday in his adopted hometown as thousands of people lined the streets to watch a funeral procession pass his school, church and former military base.Speicher was shot down in 1991 on the first night of the Gulf War. For more than 18 years, no one knew if he was killed or being held prisoner in Iraq until his remains were discovered in the desert west of Baghdad earlier this month.

Motorcycles, their red and blue lights flashing, led Speicher’s hearse and family following in a limousine along a 30-mile route of sites special to Speicher.

At a monument for war veterans where Speicher’s name was engraved in 1995, military officials, Florida Gov. Charlie Crist and the Jacksonville mayor talked about his military service. Dozens of roses were placed against the wall, where an eternal flame burns. Later, the Jacksonville Sheriff’s Office fired a 21-gun salute.

The motorcade traveled to Lake Shore United Methodist Church, where Speicher taught Sunday School. It rolled past Nathan B. Forrest High School, where he excelled at swimming and tennis.

Hundreds of people, including veterans and infants, gathered at each of the locations, including the site of the former Cecil Field Naval Air Station where Speicher’s squadron, the Sunliners, was based before he left on the USS Saratoga for the Gulf War.

‘He is home’
Shelly Bradley’s husband was on the USS Saratoga when Speicher was shot down.

"It is nice to know he is home. It’s not exactly what we had hoped, but maybe it will bring some closure to his family," said Bradley, of St. Augustine. Chief Warrant Officer Brian Farrell, an instructor pilot with the Florida National Guard, dressed in his Army uniform to pay his respects.

"I’m here to recognize the sacrifice this young Navy officer gave to this country and the pain his family has endured for the last 18 years," Farrell said. "I just got back from Iraq four months ago and I just wanted my family to be a part of it."

Speicher, a Kansas City-area native who moved to Florida as a teenager, was buried in a private ceremony at Jacksonville Memory Gardens. Four Navy planes flew over the cemetery in the missing man formation.

For nearly two decades after the 33-year-old Speicher disappeared over the Iraq desert, his family pushed the Defense Department to find out what had happened. On Aug. 2, the Pentagon disclosed that Marines had recovered Speicher’s bones and skeletal fragments — enough for a positive identification.

Defense officials originally declared Speicher killed in action hours after his plane was shot down over west-central Iraq. Then-Defense Secretary Dick Cheney announced on television that Speicher was the first casualty of the Gulf War.

Once listed as MIA
Ten years after the crash, the Navy changed Speicher’s status to missing in action, citing an absence of evidence that Speicher had died. In October 2002, the Navy switched his status to "missing/captured," although it never explained why.

Over the years, critics said the Navy had not done enough, particularly right after the crash, to search for the pilot.

"We just want to honor our fallen hero, since he is from our area. We felt is was our duty to come and honor him and his family," said Deborah Hudgins, who knew some of Speicher’s family members.