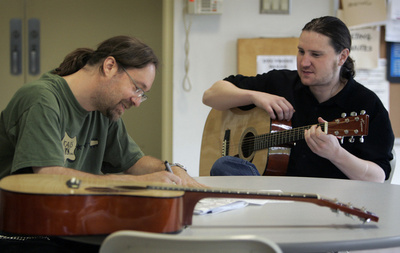 Patrick Nettesheim (left) writes out chords in guitar tablature for Steve Ringerson, an instructor at Guitars 4 Vets. Guitars 4 Vets is a volunteer group that works with veterans at the VA Medical Center to teach them to play guitar and to put their experiences into words and music. Nettesheim co-founded the group with Vietnam veteran Dan Van Buskirk when Van Buskirk noticed significant improvement with stress after taking guitar lessons from Nettesheim.

It’s Tuesday afternoon in a meeting room at the Clement J. Zablocki Veterans Affairs Medical Center’s domiciliary in Building 123. A small group of veterans and civilians sits in folding chairs clutching and strumming guitars. Chords from a Clapton tune, soft conversation and bursts of laughter float in the air.

The weekly drop-in guitar class hosted by Guitars 4 Vets is in session.

"This program is about expressing emotions," says co-founder Patrick Nettesheim, a Milwaukee-area guitar teacher and musician. "We’ve set up a relaxed learning atmosphere where the guitar becomes the catalyst for human interaction."

The idea for the nonprofit group was launched in the summer of 2007 when one of Nettesheim’s students, Dan Van Buskirk, a Vietnam veteran being treated for post-traumatic stress disorder, recognized the therapeutic value of taking guitar lessons.

"Pat’s an extremely compassionate man," Van Buskirk says. "We had a lot of talks during my lessons and it really helped me out."

Van Buskirk, who served on a Marine reconnaissance team in Vietnam, said those sessions helped him deal with the survivor guilt that many combat vets face.

"I lost a team and a half of guys over there," he says. "We were not allowed to grieve, and moved from one patrol to the next."

A social worker by training, Van Buskirk suggested that the pair create Guitars 4 Vets as a complementary therapy or outreach to veterans receiving mental health and medical services through the VA system.

"I know what it’s like to be in a place where you don’t have a sense of security, worth or self-esteem," Van Buskirk says. "I like to do whatever I can to lift guys out of that situation and out of their caves, taking them from a survival mode to a thrive mode."

Alan Harrison of Milwaukee is a participant who is thriving in the music program. The Ohio native served in the U.S. Navy from 1973 to 1994, retiring as a Boatswain’s Mate 1st Class.

"For the first time since I’ve been out of the Navy, I feel the camaraderie again," Harrison says. "These guys are just awesome. They’re like my brothers."

A VA shuttle transports Harrison to and from the center for his weekly lessons. He’s been a student in the program for six months and, as promised by the group, received a free guitar upon completion of his fifth lesson.

Harrison and his instructor, Meaghan Owens, recently completed co-writing a song inspired by his years in the military. Owens is a Nashville songwriter who grew up in Oconomowoc and is temporarily working in Milwaukee.

The sweet-voiced young woman stresses that their work represents a true collaboration. She crafted Harrison’s stories into lyrics and he composed the music.

She also rejects the roles of "teacher" and "student."

"We all teach and learn from each other," Owen says.

A believer in the concept of giving back to one’s community, Owens is grateful that she found an outlet to suit her talents.

"The music industry can be a self-centered business," she says. "I’d feel out of balance if I didn’t find a way to share and help others. Music is a healing force and it’s the gift I have to offer."

Kinthy Pourheydarian served in the U.S. Army from 1978 to 1992. A self-taught saxophonist who enjoys playing with the VA Jam Band (open to clients at the VA Center), the veteran acknowledges that learning a new instrument has done wonders in battling stress.

"When I’m practicing I don’t have time to think about other things on my mind," she says. "All I think about is where my fingers are going. It releases anxiety and tension."

As a 24-year member of the armed forces (first Army, then Air Force Reserves), he experienced the conflicts in Grenada, Desert Storm and Iraq.

"There are times you get bad dreams," the 46-year-old veteran says. "You have to be as strong as you can and get counseling. The guitar lets me focus on something."

An avid guitar player since his teens, Ruzicka is touched as he watches his students start to relax, learn and open up during their guitar lessons.

"Some of them have been in a clamshell all their lives," he says. "When they are able to start talking with me, it brings tears to my eyes."

According to Nettesheim, Guitars 4 Vets is presently serving veterans through VA facilities in Milwaukee, Madison, La&enspCrosse and Tomah. And word about the group is spreading. With a small team of volunteers, the group has served about 400 veterans to date.

Nettesheim says requests are coming in from other states, including Illinois and Arizona, to start up these therapeutic programs

"We really need volunteers to help us grow," he says.