Today at Arlington National Cemetery, Members of the Military Order of the Purple Heart laid a wreath at the Nurses Memorial in an annual ceremony that pays homage to the dedication and sacrifice of the military nurses from all of the Armed Forces of the United States of America.

Nestled on a slight rise against a background of evergreens, the heroic size white marble statue of a nurse in uniform overlooks the rows of white tablets that mark the final resting place of  those Army, Navy, and Air Force nurses who so valiantly earned their right to lie in Section 21 at Arlington, also called the “Nurses Section.” 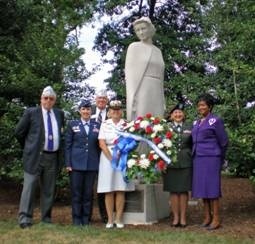 Also present was Major General David Blackledge, Assistant G3 for the US Army, and himself a Purple Heart recipient.  Other members of the MOPH who attended the ceremony were joined by military nurses of all military services from throughout the National Capital Area Region.

In his opening remarks, Commander Sims noted that this special event “provided the opportunity to salute not just nurses, but also to honor all military medical personnel; the nurses in field hospitals, on hospital ships, or manning evacuation aircraft; the hospital corpsmen and medics in the field taking care of wounds or injuries, or performing life-saving measures to get soldiers, Marines, or airmen back to duty or ready for evacuation; the doctors who patched us up; the lab and x-ray technicians and pharmacy personnel who helped ensure diagnoses were complete and accurate; and, all of those who made it possible for us to be nurtured back to health and made it possible for us to come back home.”

In her responding remarks, Major General Siniscalchi asked everyone to “take a few moments to remember the sacrifice, dedication, and devotion to duty” of military nurses.

She added that “nurses have had a lasting impact and presence in all military conflicts from the beginning of the American Revolution through today, as we continue to serve our war fighters.

We are valiantly performing in combat operations, natural disasters, and responding to humanitarian calls.  We are the nation’s health care ambassadors across the globe.”

The organization now known as the "Military Order of the Purple Heart of the U.S.A. Inc.," (MOPH) was formed in 1932 for the protection and mutual interest of all who have received the decoration. Chartered by the Congress, The MOPH is unique among Veteran Service Organizations in that all its members were wounded in combat. For this sacrifice, they were awarded the Purple Heart Medal. With grants from the MOPH Service Foundation, the MOPH and its Ladies Auxiliary promote Patriotism, Fraternalism, and the Preservation of America’s military history.