There is much information on the Internet related to Service Dogs for Veterans living with Post Traumatic Stress Disorder (PTSD). A simple ‘Google’ search using these terms produces prolific results. Where does one begin to sift through these data? Which websites are credible, and which are not? Which organizations are legitimate and sincere in their efforts to assist Veterans, and which ones are merely in it for the money?

We have asked that Dr. Joan Esnayra a pioneer in the field of Psychiatric Service Dogs do a series of articles for Veterans Today that will help Veterans and Military Families considering the use of a service dog make informative decisions. This series is also intended to educate the public about the misinformation being circulated about such service dogs.

What is a Service Dog? 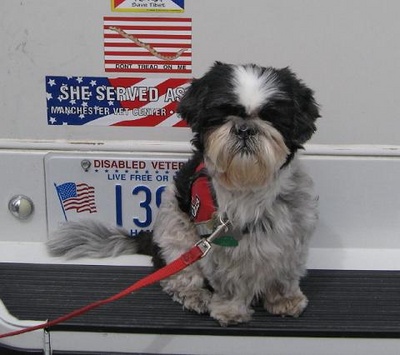 Organizations such as the International Association of Assistance Dogs Partners, Assistance Dogs International , the Delta Society, and Service Dog Central deliberately misrepresent the law by giving the reader the impression that in order for a Service Animal to be considered legitimate under the law it must be trained to perform ‘physical tasks.’ According to these groups, psychiatric service dogs should function exactly as do service dogs for persons living with physical disabilities. This makes no sense.

The official definition of the term ‘Service Animal’ is listed in the Code of Federal Regulations and this definition reads as follows:

"Service animal means any…animal individually trained to do work or perform tasks for the benefit of an individual with a disability…(Reference: 28 CFR 36.104)"
Importantly, the phrase ‘do work’ connotes that service animals may be trained to assist persons with disabilities in ways that may not be construed as tasks. For this reason, task training is not an essential requirement of service animal training under the Americans with Disabilities Act (ADA).

In support of this assertion, I quote below the U.S. Department of Justice’s own words on the issue:

"Many commenter’s followed the lead of an umbrella service dog organization in suggesting that "performing tasks" should form the basis of the service animal definition, that "do work" should be eliminated from the definition, and that "physical" should be added to describe tasks. Tasks by their nature are physical, so the Department does not believe that such a change is warranted. In contrast, the phrase "do work" is slightly broader than "perform tasks," and adds meaning to the definition. For example, a psychiatric service dog can help some individuals with dissociative identity disorder to remain grounded in time or place. As one service dog user stated, in some cases "critical forms of assistance can’t be construed as physical tasks," noting that the manifestations of "brain-based disabilities," such as psychiatric disorders and autism, are as varied as their physical counterparts. One commenter stated that the current definition works for everyone (i.e., those with physical and mental disabilities) and urged the Department to keep it. The [Justice] Department has evaluated this issue and believes that the crux of the current definition (individual training to do work or perform tasks) is inclusive of the varied services provided by working animals on behalf of individuals with all types of disabilities and proposes that this portion of the definition remain the same." 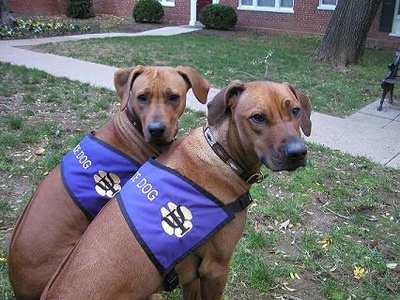 The bulk of what service dogs may do for Veterans living with Post Traumatic Stress Disorder [PTSD] falls under the rubric of ‘work’. Consider the following quote taken from one of my presentations, "Physical disabilities are remedied physically or mechanically. Mental health disabilities are remedied mentally or cognitively." Practically speaking, this means that one’s service dog may be incorporated into a cognitive intervention in order to mitigate symptoms of PTSD. Cognitive interventions are an accepted mainstay in the field of mental health.

Thus, if you experience hyper vigilance as part of your PTSD and do not feel secure in an open public space, then, at any given moment you can choose to conduct a ‘body scan’ of your service dog in order to ascertain whether or not your dog perceives danger in the environment. Dogs are astute observers of their environments. In an evolutionary sense, their survival has depended upon their ability to sense danger in their midst. If your dog’s body is relaxed, if its tail is wagging side to side, if hackles are not raised, and a low decibel growl is not apparent, and if your dog is not stealth fully creeping in a predatory posture, then, you may choose to conclude that your dog senses no danger in the environment. Now you have a choice to make. You already know that hyper vigilance is a symptom of your PTSD. Your dog has keen senses and does not perceive danger in the environment. Whom are you going to believe? This is a cognitive intervention. This is ‘doing work’.

True experts in the field of psychiatric service dogs work at the interface of ‘doing work’. In order to work creatively in this arena, one must have a deep understanding of the phenomena associated with different forms of mental illness. None of the organizations that currently misrepresent the legal definition of what a service dog is, have resident expertise in mental health. Rather, they are physical disability service dog organizations that are trying to stretch their reach into the realm of mental health. The translations falls short, and by focusing on the performance of physical tasks these organizations are neglecting the most important elements of how a psychiatric service dog may assist a person living with a mental health disability.

In our next article we will discuss the benefits of owner-training your own Psychiatric Service Dog as opposed to obtaining one that is already trained from a program.

Joan Esnayra, Ph.D. is President and founder of the Psychiatric Service Dog Society. (www.psychdog.org). Dr. Esnayra has spent the past twelve years pioneering the ‘Psychiatric Service Dog’ therapeutic model. Building upon her analytical training as a scientist, and her insights as a mental health consumer, Dr. Esnayra and members of her online community identified over 30 tasks or functions that Psychiatric Service Dogs may be trained to provide to their owners who are disabled by refractory symptoms of severe mental illness.

Most recently her interdisciplinary research group was awarded a clinical research grant from the U.S. Army to test the Psychiatric Service Dog Therapeutic Model in the context of a pilot study at Walter Reed Army Medical Center.