Home Veterans The History of Thanksgiving

In 1621, the Plymouth colonists and Wampanoag Indians shared an autumn harvest feast which is acknowledged today as one of the first Thanksgiving celebrations in the colonies. This harvest meal has become a symbol of cooperation and interaction between English colonists and Native Americans.

Although this feast is considered by many to the very first Thanksgiving celebration, it was actually in keeping with a long tradition of celebrating the harvest and giving thanks for a successful bounty of crops. Native American groups throughout the Americas, including the Pueblo, Cherokee, Creek and many others organized harvest festivals, ceremonial dances, and other celebrations of thanks for centuries before the arrival of Europeans in North America.

Historians have also recorded other ceremonies of thanks among European settlers in North America, including British colonists in Berkeley Plantation, Virginia. At this site near the Charles River in December of 1619, a group of British settlers led by Captain John Woodlief knelt in prayer and pledged "Thanksgiving" to God for their healthy arrival after a long voyage across the Atlantic. 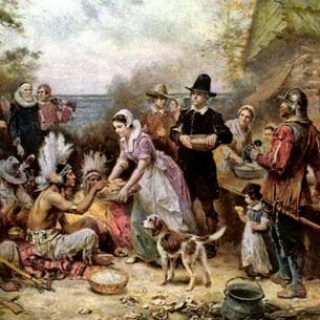 This event has been acknowledged by some scholars and writers as the official first Thanksgiving among European settlers on record. Whether at Plymouth, Berkeley Plantation, or throughout the Americas, celebrations of thanks have held great meaning and importance over time. The legacy of thanks, and particularly of the feast, have survived the centuries as people throughout the United States gather family, friends, and enormous amounts of food for their yearly Thanksgiving meal.
What Was Actually on the Menu?

What foods topped the table at the first harvest feast? Historians aren’t completely certain about the full bounty, but it’s safe to say the pilgrims weren’t gobbling up pumpkin pie or playing with their mashed potatoes. Following is a list of the foods that were available to the colonists at the time of the 1621 feast. However, the only two items that historians know for sure were on the menu are venison and wild fowl, which are mentioned in primary sources. The most detailed description of the "First Thanksgiving" comes from Edward Winslow from A Journal of the Pilgrims at Plymouth, in 1621:

"Our harvest being gotten in, our governor sent four men on fowling, that so we might after a special manner rejoice together after we had gathered the fruit of our labors. They four in one day killed as much fowl as, with a little help beside, served the company almost a week. At which time, among other recreations, we exercised our arms, many of the Indians coming amongst us, and among the rest their greatest king Massasoit, with some ninety men, whom for three days we entertained and feasted, and they went out and killed five deer, which they brought to the plantation and bestowed upon our governor, and upon the captain, and others. And although it be not always so plentiful as it was at this time with us, yet by the goodness of God, we are so far from want that we often wish you partakers of our plenty."

Did you know that lobster, seal and swans were on the Pilgrims’ menu? Learn more…
Seventeenth Century Table Manners:

The pilgrims didn’t use forks; they ate with spoons, knives, and their fingers. They wiped their hands on large cloth napkins which they also used to pick up hot morsels of food. Salt would have been on the table at the harvest feast, and people would have sprinkled it on their food. Pepper, however, was something that they used for cooking but wasn’t available on the table.

In the seventeenth century, a person’s social standing determined what he or she ate. The best food was placed next to the most important people. People didn’t tend to sample everything that was on the table (as we do today), they just ate what was closest to them.

Pilgrims didn’t eat in courses as we do today. All of the different types of foods were placed on the table at the same time and people ate in any order they chose. Sometimes there were two courses, but each of them would contain both meat dishes, puddings, and sweets.
More Meat, Less Vegetables

Our modern Thanksgiving repast is centered around the turkey, but that certainly wasn’t the case at the pilgrims’s feasts. Their meals included many different meats. Vegetable dishes, one of the main components of our modern celebration, didn’t really play a large part in the feast mentality of the seventeenth century. Depending on the time of year, many vegetables weren’t available to the colonists.

The pilgrims probably didn’t have pies or anything sweet at the harvest feast. They had brought some sugar with them on the Mayflower but by the time of the feast, the supply had dwindled. Also, they didn’t have an oven so pies and cakes and breads were not possible at all. The food that was eaten at the harvest feast would have seemed fatty by 1990’s standards, but it was probably more healthy for the pilgrims than it would be for people today. The colonists were more active and needed more protein. Heart attack was the least of their worries. They were more concerned about the plague and pox.
Surprisingly Spicy Cooking

People tend to think of English food at bland, but, in fact, the pilgrims used many spices, including cinnamon, ginger, nutmeg, pepper, and dried fruit, in sauces for meats. In the seventeenth century, cooks did not use proportions or talk about teaspoons and tablespoons. Instead, they just improvised. The best way to cook things in the seventeenth century was to roast them. Among the pilgrims, someone was assigned to sit for hours at a time and turn the spit to make sure the meat was evenly done.

Since the pilgrims and Wampanoag Indians had no refrigeration in the seventeenth century, they tended to dry a lot of their foods to preserve them. They dried Indian corn, hams, fish, and herbs.
Dinner for Breakfast: Pilgrim Meals:

The biggest meal of the day for the colonists was eaten at noon and it was called noonmeat or dinner. The housewives would spend part of their morning cooking that meal. Supper was a smaller meal that they had at the end of the day. Breakfast tended to be leftovers from the previous day’s noonmeat.

In a pilgrim household, the adults sat down to eat and the children and servants waited on them. The foods that the colonists and Wampanoag Indians ate were very similar, but their eating patterns were different. While the colonists had set eating patterns—breakfast, dinner, and supper—the Wampanoags tended to eat when they were hungry and to have pots cooking throughout the day.

Did you Know that the Pilgrims Probably ate Lobster at the First Thanksgiving?

Foods That May Have Been on the Menu

What Was Not on the Menu

Surprisingly, the following foods, all considered staples of the modern Thanksgiving meal, didn’t appear on the pilgrims’s first feast table:

Ham: There is no evidence that the colonists had butchered a pig by this time, though they had brought pigs with them from England.
Sweet Potatoes/Potatoes: These were not common.
Corn on the Cob: Corn was kept dried out at this time of year.
Cranberry Sauce: The colonists had cranberries but no sugar at this time.
Pumpkin Pie: It’s not a recipe that exists at this point, though the pilgrims had recipes for stewed pumpkin.
Chicken/Eggs: We know that the colonists brought hens with them from England, but it’s unknown how many they had left at this point or whether the hens were still laying.
Milk: No cows had been aboard the Mayflower, though it’s possible that the colonists used goat milk to make cheese.