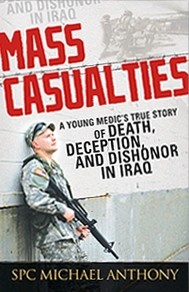 In the military we speak a different language than most.  When we talk we use acronyms and creeds, we speak—when we do—abrupt and to the point.  With that said; there’s something we need to talk about…

Throughout the military there’s a creed spoken that’s called: “leave no man behind.”

As the infantry soldier goes from house to house looking for weapon caches.

As the medic grabs his bag and runs from patient to patient.

As the pilot patrols the air and bombs the enemy.

What the Military needs to keep sight of is that “leave no man behind” no only applies to the physical body, but also the mind.

What good is it to bring a soldier home alive, if two months later they kill themselves?

What good is it to bring a soldier home alive, if they spend the next thirty years of their life, homeless and alone on the streets?

What good is it to bring a soldier home alive, if when they come home they become addicted to drugs, and their only options are suicide, or homelessness?

War is no easy path and returning home doesn’t equate the end of a veteran’s journey or battles.  There are many fights ahead for veterans, not all of them are glorious and some of them, people deny their existence—Veteran—PTSD, TBI, Suicides, and Homelessness.

Statistically, between 25% and 33.3% of all homeless people are veterans.

Statistically, between 1/5 and 1/8 veterans return home with PTSD.

We need to remember that “leave no man behind” not only applies to the physical body but also the mind?

Michael Anthony (MA) seemed destined to serve from the day he was born.  The youngest of seven

children, Michael has four brothers and two sisters, all but one of whom joined the military. His father and two grandfathers were also in the Military.

After graduating high school, he joined the Army Reserves, went through basic training, and then went through job training to become an Operating Room Medic. One year later he returned home and enrolled in college to begin his first semester. Almost immediately upon finishing his first semester he was shipped off to Wisconsin to train for four months before he would leave and spend his next year in Iraq. Michael is now back in the States and working toward a Bachelor’s Degree in creative writing.

"A raw, honest narrative by a young soldier thrust into an atmosphere that demanded care for the wounded, yet seemingly deprived of leaders who understood their role was to help, and not to be self-absorbed." — Bing West, Former Assistant Secretary of Defense for International Security Affairs; Author of The Village and No True Glory

"I was moved by Michael’s very personal account of life in Iraq and the wisdom he gained in that crucible–including not to salute if I ever find myself in a war zone." — Susan N. Herman, President, American Civil Liberties Union; Centennial Professor of Law

"Michael Anthony introduces us to an alien world that is unimaginable unless experienced–or witnessed–through the author’s eyes and pain, and youthful, matter-of-fact wisdom. It is hard to read about the unexpected casualties of war, but Michael takes us on an unforgettable personal journey as filled with humor as it is with horror." — Philip G. Zimbardo, New York Times Bestselling Author of The Lucifer Effect: Understanding How Good People Turn Evil

"Michael Anthony’s memoir is not about the politics of Iraq. Instead it takes up deep inside the war, inside and outside the operation room, the barracks, the talk of the soldiers, the feeling of the situation…unique and powerful." —HOWARD ZINN, Author of A People’s History of the United States