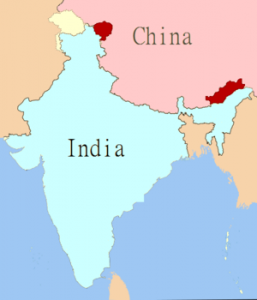 INDIA IS LOSING THE BALANCE

India which has openly signed a number of mutual agreements with China, calling the latter a strategic partner, has been playing a double game with Beijing by acting upon a secret strategy.

Although Sino-Indian differences have always existed due to Indian presumption that peace-loving China is its adversary, yet the same has entered into the alarming situation when on December 29, 2009, Indian Army chief General Deepak Kapoor openly revealed that Indian Army “is now revising its five-year-old doctrine” and is preparing for a “possible two-front war with China and Pakistan.” While New Delhi is no is match to Beijing in conventional and nuclear weapons, but this statement clearly shows that Indian rulers are ready to go even to the extent of war especially against China.

However, with the statement of Kapoor, Sino-Indian rift which has been in its embryonic stage has come on the surface.

Last year, Indian leaders and media seriously reacted to an article of a Chinese think-tank, Zhan Lue who suggested the disintegration of India. As a matter of fact, it was the only personal opinion of a Chinese think-tank, having no official backing, but Indian high officials took it as the state voice of Beijing. In this respect, on August 11, India Today cited Navy Chief Admiral Sureesh Mehta disclosing: “China is likely to be more assertive on its claims, especially on its immediate neighbours…matching pision should be changed to technological advancement on the Indian military side. We should reduce the Chinese footprints on the Indian Ocean.”

While criticising the article, former officer of the Indian intelligence agency, RAW RSN Singh remarked, “This kind of a report never comes without state approval. But India is fully prepared, if the Chinese think of any misadventure, they will be in for a shock.”

In fact, under the pretext of Chinese threat to the Indian Union, New Delhi has itself been planning to destablise, and even to disintegrate China. In this regard, on March 10, 2008 when anti-government violent protests by Buddhist monks erupted in Tibet’s capital, Lhasa including nearby provinces, India, backed the same, though outwardly denied. Dalai Lama, the spiritual leader of Tibet who has lived in exile in India along with his 120,000 followers since a failed revolt against Chinese rule in 1959 has been tacitly encouraged by New Delhi—enabling him to mobilize armed groups and international support to create instability in the neighboring provinces of China.

For this purpose, India has clandestinely established secret camps where Dalai Lama’s militants are being imparted armed training. In this respect, Indian RAW has sent a number of agents who have joined the ranks and files of the Tibetan insurgents of China, and they create unrest from time to time.

New Delhi shows that despite Sino-Indian border dispute, she does not favour an independence

of Tibet and avoids any propaganda against Beijing. But Indian stand was indirectly expressed by its leaders and media. For example, the former foreign minister Yashwant Sinha had said, “We want good relations with China, but if we reach a point of conflict over Tibet, we should be prepared for that eventuality.”

The state-run China Daily, on July 27, 2006, denounced the Lama as a “splittist” and pointed out that he has “collaborated with the Indian military and American CIA to organise Indian Tibetan special border troops to fight their way back into Tibet.”

It is notable that in order to conceal its covert activities, India has always blamed China for backing Maoist uprising.

In this context, instead of addressing the root causes of the Maoist uprising, Indian government has recently intensified its blame game against China, alleging for supplying arms to these insurgents.

While everyone knows that in more than seven states, India itself faces separatist movements which are the result of acute poverty and social injustices. Particularly, Maoist movement has been raging in the form of peasant uprising in West Bengal. And its leader, Mupala Luxman Rao in 1969, protested against big Hindu landlords who left no stone unturned in molesting the poor people through their mal-treatment such as forced labour, minimum wages, unlawful torture and even killings. Now this movement which is indigenous has expanded to Indian other regions including Maharashtra. At present, it is a popular insurgency by the downtrodden who have massive support of people for their ideology.

In this regard, on October 31, 2009, The New York Times wrote, “India’s Maoist rebels are now present in 20 states and have killed more than 900 Indian security officers…India’s rapid economic growth has made it an emerging global power but also deepened stark inequalities in society.” However, by neglecting all these ground realties, and accusing Beijing, New Delhi has been advancing towards a self-destructive path. Taking cognizance of Kapoor’s threat against China and Pakistan, on January 2, Pakistan’s Joint Chiefs of Staff Committee (JCSC) Chairman Gen. Tariq Majid has rightly indicated, “The Indian Army Chief’s statement exhibits a lack of strategic acumen. He further said that such a path could “fix India on a self-destructive mechanism.”

India’s misperceptions about Beijing in connection with Maoist movement could also be judged from the fact that it has also been accusing the latter for supporting Maoist insurgency in Nepal. Recently, India has also blamed China for backing a Maoist study center so as to cause uprising in Nepal. While these Indian allegations were already proved untrue when in the recent past, Maoist political party won the overwhelming majority in country’s first genuine elections.

As regards Indian new military build up against China, on May 31 last year, after 43 years, New Delhi re-opened its Daulat Beg Oldi (DBO) airbase in northern Ladakh, which overlooks the strategic Karakoram Pass and is only 8 kilometers, south of the Chinese border-Aksai Chin area. India has also erected more than 10 new helipads and roads between the Sino-Indian border.

In this connection, Defence Ministry planners are working on building additional airfields and increasing troops—raising two new mountain pisions to be deployed along the 4,057-kilometer Line of Actual Control (LAC).

With the help of Israel and America, on 26 February 2008, India conducted its first test of a nuclear-capable missile from an under sea platform after completing its project in connection with air, land and sea ballistic systems.

In the recent past, Indian Navy Chief Admiral Sureesh Mehta revealed that New Delhi “will soon float tenders to acquire six submarines”. Mehta also accused Beijing and explained that the “Indian Navy would keep a close watch on the movements of Chinese submarines which are operating out of an underground base in the South China Sea” and “wish to enter the Indian Ocean”. However, under the pretension of China factor, New Delhi and Israel with the tactical support of the sole superpower are plotting to block the sea lanes of the Indian Ocean for their joint strategic goals.

It is of particular attention that in May 1998, when India detonated five nuclear tests, the then Defense Minister George Fernandes had declared publicly that “China is India’s potential threat No. 1.” India which successfully tested missile, Agni-111 in May 2007, has been extending its range to target all the big cities of China.

America which signed a nuclear deal with India in 2008, intends to make India a mini-super power of Asia by containing China and destablising Pakistan as well as Iran. Pakistan’s province, Balochistan where China has invested billion of dollars to develop Gwadar seaport irritates both Washington and New Delhi.

However, Beijing and Islamabad cannot neglect their common defence when their adversaries are following a covert strategy. In this connection, Pakistan’s President Asif Ali Zardari had decided to visit China after every three months to further cement ties between both the old friends. Both the countries have signed eleven agreements to enhance bilateral cooperation in perse sectors. So Sino-India rift is also part of the greater cold war between the US and China. Besides, Indian reservations regarding China’s infrastructural projects in Azad Kashmir are unjustified and discriminative.

Indian game plan against Beijing could also be assessed from the fact that on the one hand, New Delhi is grabbing waters of neighboring countries by building dams, while India is challenging the Chinese plans to build a dam on the river Yarlung Tsangpo in the upper reaches of Tibetan plateau, reiterating that it would adversely affect navigation in the Brahmaputra River.

Returning to our earlier discussion India which has wide-ranging agreements with Beijing, apparently emphasises mutual cooperation, but has been acting upon anti-China secret diplomacy. Hence, Sino-Indian rift has widened in the recent times.

Sajjad Shaukat is a regular writer for Opinion Maker. He writes on international affairs and is author of the book: US vs Islamic Militants, Invisible Balance of Power: Dangerous Shift in International Affairs.