Secretary of Defense Robert Gates has been briefed by the Pakistani Military High Command that they are being overwhelmed by highly trained and extremely well armed militants in the border regions and terrorists operating across the country.  We have been told by the highest sources that Blackwater/Xe and other US based mercenary groups have been actively attacking police, military and intelligence organizations in Pakistan as part of operations under employment of the Government of India and their allies in Afghanistan, the drug lords, whose followers make up the key components of the Afghan army.

Investigations referenced in the Pakistan Daily Mail by abrina Elkani and Steve Nelson indicate that, rather than hunt terrorists who have been killing Americans, these groups have actually taken key militant leaders into Afghanistan where they are kept safe and even offered medical treatment by the United States military.   Years ago, we all heard the rumor that Osama bin Laden had received care at a US hospital in Qatar after leaving Sudan to take over what we claim was the planning of 9/11.  FBI transcripts verify that bin Laden, according to testimony by former FBI translator Sibel Edmonds, was working for the US at that time and had maintained contact with his CIA handlers through the fateful summer of 2001.

The Army of Pakistan has been regularly capturing advanced weapons of Indian manufacture from militants in the border region.  India maintains 17 “consular” camps inside Pakistan, near the border, adjacent to Blackwater facilities, falsely designated as CIA or USAID stations.  Pakistan claims these operations train Taliban soldiers and terrorists for operations against civilian targets in Pakistan.  Thousands have died in Pakistan over recent months during these attacks.  Pakistan also contents these same groups are, not only fighting the Pakistan military but the Americans as well.

General Stanley McChrystal had withdrawn American forces from key areas in Afghanistan across from enemy held regions under attack by the Army of Pakistan.  We are now told that this allowed those areas to become safe havens for forces formerly operating in Pakistan, who are now enjoying the freedom and hospitality of, not only Afghanistan but are being ignored by the NATO forces in the region.

The untold story is the massive complicity of Americans with their private airline, now suspected in yet another war, not Vietnam, not Central America/Iran Contra but Afghanistan, for a third time, of smuggling narcotics.  The pattern is impossible to ignore.

Read the list of accusations.  Note that many of them have been corroborated from 5 or more sources already:

—Balochistan’s ‘Missing People’ being trained in Afghanistan by RAW, Xe-Services

NKabul—While the Pakistan government continues to deny that the infamous private army of the United States, known as the Blackwaters or the Xe Services, Islamabad would defiantly be having no answer if questioned that in that case, how is it always possible for deeply injured, half dead commanders of the Tehreek-e-Taliban Pakistan etc, manage to be evacuated safely to US-run military facilities in Afghanistan after being hit hard back in the tribal belts of Pakistan and started resurfacing in the country where thousands of US led NATO/ISAF troops are apparently engaged in “Hot Pursuit” of the same militant elements, at least two such cases have recently surfaced, reveal the findings of The Daily Mail.

The Daily Mail’s findings reveal that at least 2 most wanted militant, being persuaded by the Pakistan Defence Forces in the tribal belt that connects the nuke powered Pakistan with the war ravaged Afghanistan, after being badly hit by the Pakistani troops, managed to get evacuated to Afghanistan in very safe and composed manner.

The Daily Mail’s findings indicate that the 2 Most Wanted militant Commanders including Maulvi Fazlullah and Qari Hussain were earlier reported to have been seriously injured during Pakistan Army’s anti militancy operation, code-named “Operation Rah-e-Rast” and their hideouts were destroyed by law enforcing agencies in Swat, were secretly taken to Afghanistan by the operatives of Blackwater’s or the Xe-Service and have recently surfaced in Afghanistan. 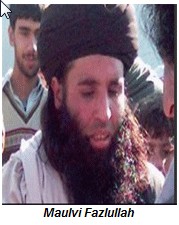 According to The Daily Mail’s investigations, Maulvi Fazaluallah is spotted residing in Kamdesh district of Nooristan along with 300 militants and other middle level Commanders. These finding also disclose that Maulvi Fazlullah had remained under treatment in a medical facility under US troops in Bagram airbase before he returned to Kamdesh district.

The Daily Mail’s findings indicate further that it is the same area where US troops vacated their posts with the intention of allowing the fleeing Pakistani militants space to regroup. His escape was made possible with the active support of the Afghan intelligence, financially supported by Indian Intelligence agency R&AW and executed by the operatives of Xe-Services while the Xe-Services also work for the Afghan drug mafia and warlords. 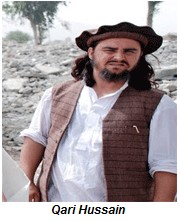 The Daily Mail’s investigations further reveal that similarly, the other militant Commander of Tehrik Taliban Pakistan Qari Hussain surfaced in Afghanistan soon after the launching of operation “Rah-e-Nijat” . These findings reveal that the Blackwaters or the Xe-Services even used the choppers to evacuate the top militant to Afghanistan. According to credible sources in South Waziristan (Pakistan’s tribal area) who requested not to be named, few helicopters were seen entering Pakistan territory from neighbouring Afghan province of Paktia, close to Pak-Afghan border which landed on Pakistani soil and evacuated Qari Hussain and a few others, then departed immediately towards Afghanistan. Some other sources have also reported spotting foreign helicopters in the area while the locals, when contacted also confirmed to have witnessing landing, take off and flying of helicopters in the aerial direction of the bordering Afghan province of Paktika and Paktia. A notable of Makeen (Resident), Abdul Samad Khan who attended local Jirga in area close to the border and stayed there for a few days, revealed that since start of military operation in South Waziristan, the helicopters traffic of USA/Afghan Government had increased manifold in the war zone for unknown reasons.

It is worth mentioning here that the US troops vacated posts in Paktika at the crucial time when operation “Rah-e-Nijat” was progressing well, again thus allowing fleeing militants space on Afghan soil to regroup and escape capture.

The Daily Mail’s findings indicate that the Xe-Services were also tasked to evacuate many RAW sponsored militants from the Balochistan province of Pakistan and all these “evacuated” militants and separatists are being dubbed as “missing people” by their families and courts back in Pakistan. These findings indicate that around three thousand, “evacuated” Pakistanis are being trained further by the operatives of RAW and the personnel of India’s Military Intelligence that are present in Afghanistan for more than five years. These findings further elaborate that RAW’s Special Operations Division Chief Chhota Rajan is personally supervising the training and facilitation process. These findings indicate that the evacuated militants are later reorganized and trained further at different camps that are being run under the joint supervision of Chhota Rajan and a senior Indian MI officer with the rank of Major General.