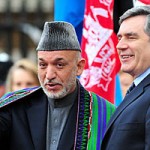 In today’s Time Magazine online we find an article entitled London Afghanistan Summit Glosses Over the Cracks .  Essentially the West has decided to buy off the Taliban.  We could have done this nine years ago, saved hundreds of billions of dollars and countless Western and Asian lives.  Why now?

Why?  My guess is that because whatever the hell it was that we wanted or needed in Afghanistan, we now have it.  It is time to leave, we have gotten what we came to get.  I have no clear idea how that is measured, but somebody, somewhere has decided that this ruse is now over.

What was the death and pain and incredible outflow of Western and mostly American money and young lives all about?  What was the end game?  What was the goal?  Why did we get involved in this?

What in hell is going on?

This thing is about to wrap up after almost nine years of death and destruction and an outflow of capital that we all desperately needed to stay in the West and rebuild our economies and infrastructures.  And none of us have a clear, stated and plausible idea as to why we went there in the first place.

This is modern warfare?  This is how the modern Western democratic state operates?  It wages unrestricted warfare using public monies without proper explanation to the taxpayers as to why the money and lives are being wasted on a series of violent boondoggles that have no clear explanation and do not rest on any logic that the taxpayer can see.

Not only is this immoral and unethical based on the warfare aspect of these actions, but it is an incredibly expensive and wasteful way to use up taxpayer money for the benefit of international speculators, banksters and energy cartel profits.  Once again, public monies have been used to fatten the private portfolios of the Skull and Bones crowd.

This is downright shameful.  We are going to sneak out of that place in the dark of night like burglars who just ripped off a vacation home in the off-season.  No one will even see us leave.

What was all the death and destruction about?