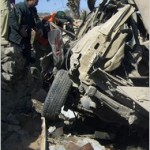 Update: Soldiers’ Deaths in Pakistan Raise Questions on U.S. Presence – The deaths of three American soldiers in a Taliban suicide attack Wednesday lifted the veil on United States military assistance to Pakistan that the authorities here would like to keep quiet and the Americans, as the donors, chafe at not receiving credit for.  The soldiers were among 60 to 100 members of a Special Forces Operation team that trains Pakistan’s paramilitary Frontier Corps in counter-insurgency techniques, including intelligence gathering and development assistance. The American soldiers serve under the overall command of Admiral Eric T. Olson, the head of the Special Operations Command. –
By JANE PERLEZ—ISLAMABAD, Pakistan — Three American soldiers were killed in a roadside bomb attack Wednesday morning in an area known as a Taliban stronghold but which the Pakistani military had declared cleared of the militants, two Pakistani government officials said.

Two American soldiers were also injured in the explosion of a remote-controlled device that was set off near a school in Lower Dir, a region adjacent to the troubled area of Swat, the officials said. The United States Embassy said it would release a statement this afternoon.

The American soldiers, who may have been part of a training unit, were en route to inspect a proposed site for small-scale development projects that were to be undertaken by the Frontier Corps, a paramilitary force that the American Army has been training, a senior official in the North-West Frontier Province said.

No American soldiers are formally stationed in Pakistan, as they are in Iraq and Afghanistan. The presence of American troops, mainly for intelligence and training missions, has been handled with extreme discretion because of sensitivities of the Pakistani military and government. Sections of the Pakistani press have waged an anti-American campaign in recent months that has made the Pakistani authorities even more nervous about association with the United States and perceived infringements on the country’s sovereignty.

The Pentagon has acknowledged that American military advisers and technical specialists are involved in training Pakistani Army and paramilitary troops but stipulated that these advisers were not involved in combat.