Former Army medic walks the length of Vietnam to raise funds for children affected by Agent Orange.  “Doc” Duff, age 59, now lives with his Vietnamese wife in Nha Trang, Vietnam, which is the kick-off point for this year’s walk.
(NHA TRANG, VIETNAM) – A Vietnam Army veteran begins the second annual walk in Vietnam on April 3, 2009 to support children disabled from Agent Orange 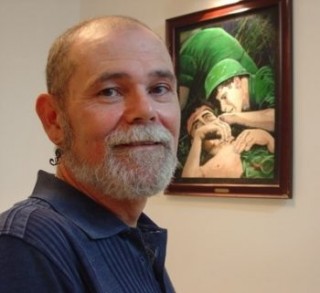 If you asked most Irishmen, they will know about the Orange Walks in Northern Ireland on July 12th, which mark the victory of Prince William of Orange over King James II at the Battle of the Boyne in 1690.

Very few will know about the Vietnam “Orange Walk” in April 2009. “Doc” Bernie Duff, Irish-American and Vietnam War veteran will walk a different kind of Orange Walk starting on April 3, 2009. April is a good time for a walk in Vietnam. The weather is good and the traffic congestion along Rt. 1 will be relatively low compared to other times of the year. The thousands of very ill children suffering from the effects of Agent Orange were the inspiration for “Doc” Bernie Duff to initiate an Agent Orange walk in Vietnam in 2008. Donations from the Agent Orange Walk are used to provide food and education to Vietnamese children who suffer from the effects of Agent Orange. 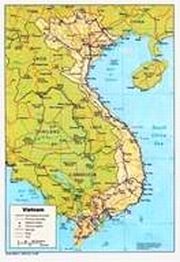 “Doc” Duff, age 59, now lives with his Vietnamese wife in Nha Trang, Vietnam, which is the kick-off point for this year’s walk.

“Doc” Duff served in Vietnam as a medic with the 51st Med Company. The standard Army tour in Vietnam was 12 months; Marines served a 13 month tour of duty. Army medics and Navy Corpsmen assigned to the Marines were affectionately known as “Doc” by fellow servicemen.

“Doc” Bernie Duff will carry this title the rest of his life with pride. (See: youtube.com/watch?v=zsvhpsAfyds or see video below)

Agent Orange was a powerful herbicide and defoliant used by the U.S. military during the Vietnam War. Agent Orange, a name given the herbicide from the orange striped 55 gallon drums it was shipped in, was used to destroy jungle foliage used by Communist forces for cover, to deny them the use of crops and to clear fields of fire around military base perimeters. The herbicide worked well, but the impact on humans and the environment are still felt today decades after the end of the Vietnam War.

According to a July 2008 report in The Globe and Mail: “U.S. forces had resorted to the most powerful defoliants they could find, dropping about 80 million litres in all. But the chemical concoction killed more than plants; laced with dioxin, it was one of the more toxic substances known to humanity – so toxic, in fact, that the man who invented Agent Orange spent much of his life trying to keep it from being used.”

“Nothing that you do in science is guaranteed to result in benefits for mankind,” said U.S. biologist Arthur Galston, who died last month [June 2008]at the age of 88. “Any discovery … can be turned either to constructive ends or destructive ends.”

“As the North Vietnamese soldiers were to discover, the “destructive ends” for Agent Orange were anything but fleeting; in fact, they have yet to subside. More than three decades after the fall of Saigon, the scourge known as the “last ghost” of the Vietnam War still haunts the children, and now the grandchildren, of its initial victims – an estimated three million people.” (See: theglobeandmail.com/servlet/story/RTGAM.20080711.worange1107/BNStory/Front/home/?pageRequested=al)

Several lawsuits were filed against the Dow Chemical, Monsanto and Diamond Shamrock which produced Agent Orange. American Vietnam veterans received a payment of $1,200 from a $180 million dollar settlement in 1984. So much for lawyers and lawsuits.

“Doc” Duff told us that: “Last year was the first OW and took place from April-June…1,068 miles. From there, we proceeded to Michigan and Chicago, where we walked another 40 miles, before taking things to the halls of the US Senate and to members of the House. We visited many staff members and all were polite, but we felt that not a whole lot was accomplished with them. One actually confided with us and said that Agent Orange is actually a dirty word in the Senate. Go figure.”

On April 3, 2009, the Orange Walk 2009 will begin. This year’s walk will encompass 7200 kilometers or about 4400 miles and will travel along the entire border area of Vietnam. While last year’s walk was done entirely on foot, most of this trip will be done on motorbikes. Donations Support Vietnamese Children

According to the The Muskegon Chronicle “Doc” Duff: “Uses his pension and disability payments to help support 11 children at Cay Bang Primary School in Ho Chi Minh City (formerly Saigon). He provides school scholarship and food for the children he lovingly calls his “Garbage Pail Kids,” who eke out a meager living by going through garbage dumps to find plastics to recycle.” “They need so much help. If they don’t work, they don’t eat,” he says. “These kids are my heart.” (See: blog.mlive.com/chronicle/2008/07/doc_duff_plans_orange_walk_fro.html) “Doc” Duff told us that: “The donations from the US have been a bit more difficult, since we no longer have the PayPal account because they wouldn’t allow donations to a group who didn’t have a 501c(3) non profit status. So we now use MoneyGram as about our only way of getting things into our hands. The other thing is that the “cast of characters from the last walk has changed considerably. Jo Simpson is now in intensive care on life support and most of the other members have gone on to form their own support groups, many, still involved in the Agent Orange cause, but in specific regions. Others have returned to their homes and families. This year, we have another great group, two of which are in wheelchairs, but are riding four wheeled motorbikes.” (See: moneygram.com/MGI/index.htm)

“Doc” Duff told us that several other walks are planned the year: “A few weeks ago, my brother in-law, Robert L. Gross passed away after battling with Agent Orange related cancer and we are dedicating part of this walk in his memory.” “My sister Cil is organizing a walk from their home in Portland, MI in July and will be donating all of the proceeds to the families affected here, as per Bob’s request.” “My brother John will also be doing an Orange Walk from his home in Whitehall, MI, the second annual walk there.” “In Colorado, I believe there will be two more walks, but I’m not sure of a time frame on that one.” “There are also plans for two walks in Florida and we’re even working on upcoming walks in Sydney, Australia and in the Czech Republic. There are more of these growing each day, so stay tuned on that!” “As for Larry King, it would be great, but I won’t hold my breath. Last year, someone even submitted my name for CNN’s Man of the Week, but after several interviews, they decided that what we were doing wasn’t newsworthy enough…yet. Of course, that was before we actually completed the walk! LOL. Who knows? We appreciate anything that can be done. In terms of donations, we are getting some, at last. They are not huge donations and of now, we don’t have anything close to what we had last year by this time, but we will go regardless of any number figures.

Whatever the amount, it’s [what] it is supposed to be.” MoneyGram donations in support of the April 2009 Orange Walk can be sent to  Bernie “Doc” Duff at: