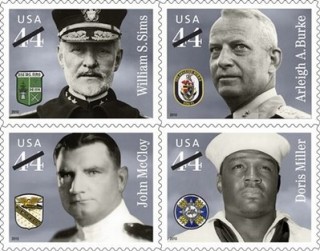 WASHINGTON — From admiral to mess attendant, four sailors who distinguished themselves are being honored with new U.S. postage stamps.

Ceremonies to dedicate the new 44-cent stamps were set for Thursday at the U.S. Navy Memorial. The stamps are going on sale nationwide.

-John McCloy, one of the few men in the nation&apos;s history to earn two Medals of Honor – one for a rescue mission during the Boxer Rebellion in which he was wounded and the second during the 1914 Mexican Revolt for intentionally exposing his boat to draw enemy fire to identify their positions. In 1919, he was awarded the Navy Cross as commander of USS Curlew, which engaged in sweeping mines in the North Sea after World War I.

-Petty Officer Doris Miller, cited as the first black American hero of World War II. At Pearl Harbor on Dec. 7, 1941, he was a mess attendant on the battleship USS West Virginia. Miller helped rescue scores of shipmates wounded or trapped in wreckage, later helping move the ship&apos;s mortally wounded captain. Never trained in its operation, he manned an unattended 50-caliber machine gun to fire on Japanese aircraft until ordered to abandon the bridge as fires raged out of control. He was awarded the Navy Cross and was killed in action in 1943.

-William S. Sims, commander of U.S. naval forces in Europe during World War I, who was an outspoken reformer and innovator who helped shape the Navy into a modern fighting force.