INDIA A THREAT TO WORLD PEACE 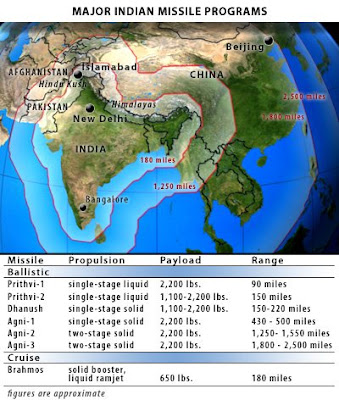 The recent remarks by the Indian army Chief, General Deepak Kapoor, concerning an evolving capability of India to simultaneously conduct operations against Pakistan and China were received with general skepticism in diplomatic and military circles. A close scrutiny of the emerging Indian military profile on the Indo-Chinese border would however reveal that India is serious in considering building up a substantive military capability to balance its politico military equation vis-à-vis China. That India has decided to up the military ante was evident through initiatives in the diplomatic and military realms. Not only has the Indian military infrastructure on the Indo-china border begun to assume an aggressive posture, India has concurrently begun fabricating alibis of enhanced military threat from China to justify belligerence of its military profile.
Raising the bogey of China remained at the heart of Prime Minister Manmohan’s hobnobbing with the US leadership as well the influential think tanks that he courted during his US sojourn in Nov 2009. “World has to come to term with the peaceful rise of China… However there is a certain assertiveness on part of China. I am unable to understand that. It should be taken note of,” Singh said while addressing a gathering of US policy makers and intellectuals at the influential think tank; Council on Foreign relations (CFR). The ‘Chinese assertiveness’ was also on his agenda for talks with President Obama. “I did mention to the US President this greater assertiveness from China,” said Singh while responding to a question on whether he conveyed to the President his China remarks made during the CFR lecture. What the Indian prime Minister effectively sidestepped was the offense that was being deliberately caused to the Chinese by the Indian military buildup on a yet to be demarcated border.
While the crushing military defeat faced by India in 1962 remains a defining moment in understanding the prevailing acrimony, the boundary dispute forms the core of the Sino Indian strategic dialog. The parleys to resolve the issue, launched in the early eighties, have failed to generate the desired momentum and the Indian stance, instead of adopting a give and take flexible approach, has visibly hardened. The Indian policy of maintaining status quo, which she has followed single-mindedly in creating a deadlock over Kashmir in the course of conducting Composite Dialog Process with Pakistan has become a source of much friction with China. China has it claims over 34000 square miles of territory constituting the state of Arunachal Pradesh which India terms non negotiable.
Chinese proposals to cede Tawang District in Arunachal where a site of pilgrimage by the Tibetans is being used as a major propaganda ploy have been flatly refused on grounds that ‘areas with settled population would be excluded from territorial exchanges’. Coupled with such inflexible posture, Indians have begun to raise the military profile in the border region; a development viewed with much concern in China. India’s Jun 8 announcement that it will deploy two additional mountain divisions on its border with China, in the North Eastern Region, has brought the troop level in the region to more than 100,000. As a consequence 27 Mountain Division has been relocated from the IHK to the 30 KM wide Siliguri ‘chicken neck’- a narrow corridor that links the seven North Eastern States with rest of India and constitutes a major vulnerability against China.
The Indian Army is also planning to raise a new strike corps for Arunachal Pradesh. The Indian Air Force has beefed up its deployment against China in the Eastern as well as Western Sectors. Two squadrons of advanced Sukhoi-30 MKI have been stationed at Tezpur in Assam State. In addition three Airborne Warning and Control Systems have been placed in the area besides addition and up gradation of airstrips and advanced landing stations. India has also started building roads and reopening air bases in the Western Sector (in the IHK border with China) including reopening of a long abandoned airstrip at Daulat Beg Oldie in the Laddakh Region. A network of road and tracks has emerged in the area bordering China to sustain logistic support infrastructure for military buildup in the area. This includes construction of a highway connecting the controversial Tawang Distrct with the city of Mahadevpur, underscoring India’s non negotiable stance on ceding Tawang to China.
India is also trying to build up strategic military capability to challenge China in the near future. The signing of the Indo US deal has opened the Indian access to uninterrupted supply of nuclear technology and material. The deal envisages operating of a large number of atomic reactors outside of the scrutiny of the IAEA thus facilitating her buildup of fissile material for fabricating nuclear weapons. Her collaboration with the US in procuring strategic weapon platforms coupled with an emerging economic clout has substantively added to her military punch. The sale of six C 130 –J has set the tone and tenor for a sustained Indo – US military cooperation that will establish India as a major military power in the Region. Major aviation companies around the world are vying with one another to secure the contract for the provision of 126 multi role combat aircraft worth $10 billion, an expansion that must have been watched by China with concern. India has recently launched its nuclear submarine INS Arihant and has got one on lease from Russia for a decade of service. The Russian nuclear submarine Nerpa would join the Indian fleet in the second half of this year. With an emerging sea punch India has made obvious its intent to dominate Malacca Straits and threaten the crucial Chinese sea lanes of communications.

China is a super power in waiting and India is vying to be a regional power. For the sake of regional and global peace it is important that India manages to contain its ambitions so that the two countries can coexist in a manner that brings peace and prosperity to the Region. For that it is important for India to avoid a confrontational stance. A trend for pursuing hegemonic ambitions that has remained the Indian trademark for interaction with its smaller neighbors would simply not work in case of China. While formulating a military strategy for tackling China, the Indian Chief would do well to accord due weightage to this important factor in his rather ambitious calculus.