The Washington Post’s Dan Eggen reports this morning on the results of a WaPo/ABC News poll which shows Americans to be “overwhelmingly” opposed to the recent SCOTUS decision to allow corporations to spend unlimited amounts of cash in election campaigns.

“Eight in 10 poll respondents say they oppose the high court’s Jan. 21 decision to allow unfettered corporate political spending, with 65 percent “strongly” opposed. Nearly as many backed congressional action to curb the ruling, with 72 percent in favor of reinstating limits. The poll reveals relatively little difference of opinion on the issue among Democrats (85 percent opposed to the ruling), Republicans (76 percent) and independents (81 percent).”

Americans have always been distrustful of corporations and their ability to exercise power and control over public affairs.

Ever since Elizabeth I created the East India Company in 1600, corporations have been a pain in the public neck. Her royal act to protect the monetary interests of wealthy members of her court, parliament and herself created a company that would, over the course of two centuries,  grow in power to rival many of the worlds nation states.

A legal fiction, corporations exist solely to protect the oligarchy from the results of their risky behavior in the search for ever greater profit. Incorporate and pass the risk on to someone else, creditors, taxpayers, anyone but those involved in the scheme itself.

Businessmen of the time, as today, were and are, infinitely more comfortable operating in an environment devoid of risk to their profits, unless of course they are operating on someone else’s money, (taxpayers) in which case nearly any risk can be accepted; “it’s public money, double down and toss the dice boys.” 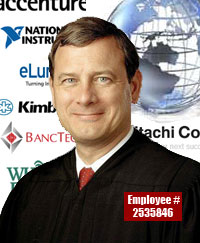 The executives of today’s mammoth multinationals have read the history and understand the importance of being in a position to manipulate government policy and legislation, to control the media, public opinion, the workforce and any other external factor that they can exercise control over.

Among the often used tools of control are threats and legal intimidation through lawsuits, loss of, or promises of employment, physical pressure, even murder, but always involve the liberal application of monetary ointments wherever an ache or irritation of the corporate body might arise.

If a college or university produces a research study that publishes facts which are seen to be detrimental to the profits or image of a large and powerful corporation it is a simple matter to simply buy the institution through lavish donations to its endowment or to establish a chair to produce “research” that is favorable to the bottom line.

Many of our most respected institutions of higher learning have fallen under the spell of corporate largess and suffer the perversion and control of academic product which follows.

If global warming threatens to change energy markets and steer us away from fossil fuels toward renewable sources of energy, an oil and gas corporation will simply launch a campaign to refute the science by buying “experts” and endowing “think tanks,” hiring high dollar public relations firms and other institutions to spout the corporate position.

If publicly funded health care, medical systems or pharmaceuticals threaten the profits of an already entrenched and bloated insurance, hospital and drug industry, money is no object, simply spend whatever it takes to pervert the legislative process and twist public opinion and the votes of legislators to the corporate good. In 2009 the health insurance industry alone spent $38 million lobbying against publicly supported health care.

America’s founders were men of the late enlightenment, a period of rebellion against the oppression, the spiritual and intellectual confinement of the church, the monarchies, the economic exploitation of past feudalism. They recognized early, the dangers in the rise of corporations. They were exceptionally wary of large and powerful corporations like East India and the threats they posed to the public good.

“I hope we shall crush in its birth the aristocracy of our moneyed corporations, which dare already to challenge our government to a trial of strength and bid defiance to the laws of our country.” Thomas Jefferson, 1812

“The end of democracy and the defeat of the American revolution will occur when government falls into the hands of the lending institutions and moneyed incorporations.” Thomas Jefferson speaking on the first attempt to establish a central bank in America

The power and manipulation of The East India Company and its ability to extract favorable treatment and immunities from tariffs and duties from the British crown and parliament was a prime factor in the lead up to the American Revolution.

In a sense The East India Company at the time of the tax act in 1773 is somewhat analogous I suppose to the first Wal-Mart swallowing up the first Mom and Pop hardware store in downtown Podunk. That pissed off Mom and Pop and much of Podunk as East India pissed off the colonists and tea merchants of the Atlantic colonies.

Americans, whether they are always aware of it or not have been engaged in a nearly continuous battle with corporations ever since.

“The end of democracy, and the defeat of the American revolution will occur when government falls into the hands of the lending institutions and moneyed incorporations.” James Madison speaking on the first attempt to establish a central bank in the US.

The blame for much of what ails us as a country and as a culture can be laid at the feet of the modern corporation and its voracious appetite for wealth, power and market share.

“The money powers prey on the nation in times of peace and conspire against it in times of adversity. The banking powers are more despotic than monarchy, more insolent than autocracy, more selfish than bureaucracy. They denounce as public enemies all who question their methods or throw light upon their crimes.

I have two great enemies, the Southern Army in front of me, and the bankers in the rear. Of the two, the one at my rear is my greatest foe. As a most undesirable consequence of the war, corporations have been enthroned, and an era of corruption in high places will follow. The money power will endeavor to prolong its reign by working upon the prejudices of the people until the wealth is aggregated in the hands of a few, and the Republic is destroyed.” Abraham Lincoln speaking on the third attempt to create a central bank in the US.

The decision of the court was among the worst decisions in our history, the ramifications of which will bring the complete corruption of our already terribly flawed election process and, if such a thing is possible, open the door even further to the horde of corrupt lobbyists and legislators slathering to feast at the trough.

A week after the court’s decision Jim Hightower wrote this:

This is not judicial activism, it’s judicial radicalism – a black-robed political coup over America’s historic democratic ideals. Five men have just overthrown the power of the people’s vote, enthroning corporate money as supreme in all of our country’s elections. Jefferson, Madison, and the other founders of our democratic republic are not merely spinning in their graves – they’re trying to claw their way out and throttle these shameful usurpers.

This decision by the court must be fought against at every level and if necessary the constitution must be amended to overturn it because, as it stands it effectively represents a nullification of much of the constitution itself.