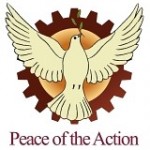 As follow-up on my Peace of the Action series covering the up-coming 20 March PEACE demonstrations across the nation Pro-PEACE Veterans and Military Families Prepare for DC Protests, we note that not only Veterans, active duty troops, but also teachers and students have joined the Peace Movement.

Yes students and teachers are beginning to take even more of an active role in the Peace Movement as they join with tens of thousands of others who will be marching on Washington, D.C., on Saturday, March 20. Of not most are high school teachers and students – a group most vulnerable to military recruitment for Iraq and Afghanistan given we have NO DRAFT.

Is it not time for Academics and Students on our Colleges and Universities to take a more proactive role in Peace, or is THE DRAFT really what it will take to get your attention Below is what they have to say in high school.

My students are studying conflict. The question written on the board in our 8th grade Humanities class today was, “What is worth fighting for?”“Do people in Iraq think we’re terrorists?” One by one my students listed their priorities: family, freedom, independence, civil rights. I asked them if perhaps Iraqis and Afghanis also fight for these same reasons. We concluded that we all want the same things. Safety for our families, autonomy, and basic human rights. One student asked, I answer, “Only if we stay silent and let these wars continue in our name.” Truth is, I also wonder what a 13-year-old in Iraq thinks of us when she can’t go to school because of gun fighting on the sidewalks of her street. My students, too, are at war. Every time education funding gets cut and the troop levels are increased, that’s a bomb being dropped. We have more in common with Iraqi and Afghani families than with the American politicians who fiddle with our education funding and only think of us as body buffers for a continuing war. Let’s all take to the streets on March 20 in solidarity with our Iraqi and Afghani sisters and brothers.  Jinnette Caceres, 8th grade teacher, New York City, New York

I hear everybody saying “CHANGE,” yet I see none occurring. So I feel that as a student, knowing what I know, I should be an up-stander in this event, let my voice be heard and make a difference.” – Lorenzo Jackson, 10th grade student, New York City, New York

Last year, the New York City Department of Education announced over $400 million in budget cuts for our public schools. These types of cuts are happening across the country and they are a death

sentence for our schools. We are mobilizing for the March 20 March on Washington because we are outraged that these types of cuts are happening at a time when our government is spending hundreds of billions of dollars on the criminal war and occupation of Iraq, and billions more on bailouts for the richest banks and corporations. – Karina Garcia, 9th grade teacher, New York City, New York

It’s about time people realize that wars and injustice don’t just fade away. It has ta

ken a mass movement to end the unjust wars of the past and it will take people militantly opposing war in the streets to end the occupations of Iraq and Afghanistan. On March 20, let’s make our voices hear loud and clear: We need money for human needs, not war! – Corey Ansel, 12th grade student, Columbus, Ohio

My students often feel disenfranchised from the government and its de

cision-making. Their families ride the turbulent waves of welfare, immigration, and education reform. My hope is that my students—and in turn, their families—will feel empowered both by the experience of having a voice loud enough for the government to hear, and by the realization that many people support and share their sentiments. – Melanie Mac, 11th and 12th grade teacher, New York City, New York

At one point or another, most high school students will be subjected to some kind of pitch by a military recruiter. They urge us to “defend

freedom,” but it’s obvious that the only freedom the military would have us defend is the freedom of corporations to pillage other nations. They go after us because they want a steady supply of cannon fodder. We need to protest on March 20 and make it clear that high school students will not kill and die for Washington and Wall Street!  – Walter Smolarek, 11th grade student, Pittsburgh, Pennsylvania

More information about March 20 is available at www.AnswerCoalition.org.

Find out about transportation from around the country