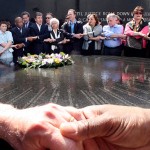 Teaching your family and your community not to hate. From the Southern Poverty Law Center (SPLC):

Hate in America is a dreadful, daily constant. The dragging death of a black man in Jasper, Texas; the crucifixion of a gay man in Laramie, Wyo.; and the stabbing death of a Latino immigrant in Long Island, N.Y., are not “isolated incidents.” They are eruptions of a nation’s intolerance.

Bias is a human condition, and American history is rife with prejudice against groups and individuals because of their race, religion, disability, sexual orientation or other differences. The 20th century saw major progress in outlawing discrimination, and most Americans today support integrated schools and neighborhoods. But stereotypes and unequal treatment persist, an atmosphere often exploited by hate groups.

When bias motivates an unlawful act, it is considered a hate crime. Race and religion inspire most hate crimes, but hate today wears many faces. Bias incidents (eruptions of hate where no crime is committed) also tear communities apart — and threaten to escalate into actual crimes.

In recent years, the FBI has reported between 7,000 and 8,000 hate crime incidents per year in the United States. But law enforcement officials acknowledge that hate crimes — similar to rape and family violence crimes — go under-reported, with many victims reluctant to go to the police. In addition, some police agencies are not fully trained to recognize or investigate hate crimes, and many simply do not collect or report hate crime data. A definitive study by the U.S. Department of Justice in 2005 estimated there are about 191,000 hate crime incidents per year.

The good news is …
All over the country people are fighting hate, standing up to promote tolerance and inclusion. More often than not, when hate flares up, good people rise up against it — often in greater numbers and with stronger voices.

This guide sets out 10 principles for fighting hate, along with a collection of inspiring stories of people who worked to push hate out of their communities.

Whether you need a crash course to deal with an upcoming white-power rally, a primer on the media or a long-range plan to promote tolerance in your community, you will find practical advice, timely examples and helpful resources in this guide. The steps outlined here have been tested in scores of communities across the nation by a wide range of human rights, faith and civic organizations.

Our experience shows that one person, acting from conscience and love, is able to neutralize bigotry. Imagine, then, what an entire community, working together, might do. …