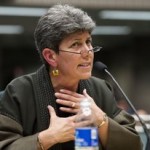 Loaded questions were asked of health industry executives who remain about as popular as Bank CEOs.  By Bobby Caina Calvan | The Sacramento Bee

Anthem Blue Cross executives, under intense questioning by the state Assembly’s Health Committee on Tuesday, defended the company’s decision to raise premiums by as much as 39 percent on hundreds of thousands of Californians.

“How much profit is enough?” Jones asked. Margolin paused uncomfortably.

After collecting her composure, she said that her company, the state’s largest for-profit health insurer, had no interest in profits beyond what she said were slim margins of 2 to 5 percent.

“Have you no shame?” Jones asked soon after – to which Margolin expressed disappointment at the question.

“We work so hard to do the right thing every day,” she said.

The rate hikes have become a lightning rod for those looking to recapture the political momentum in the effort to overhaul the country’s health care system.

Tuesday’s grilling at the state Capitol served as a prelude for congressional hearings today in Washington, where executives for Anthem’s parent company, WellPoint, could face a similar barrage of questions because of the controversial rate hikes.