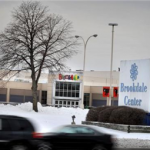 Here are a couple of stories similar to thousands playing out across the country, and tens of thousands more to come. The second article gets to the heart of the upcoming commercial real estate bust.

A sheriff’s foreclosure auction produced just one bid — from the mall’s mortgage-holders, who bid $12.5 million.

Brookdale Center went on the auction block at a sheriff’s foreclosure sale Friday, netting just one bid of $12.5 million from the shopping mall’s lenders.

The bid from Brookdale Mall HH LLC was well below the $51.8 million owed on a $54.2 million mortgage by the property’s owners, Brooks Mall Properties of Coral Gables, Fla.

Sears is its sole remaining anchor. In the last couple of years Macy’s, Barnes & Noble and Mervyn’s have all closed their stores. The mall also has lost other key tenants, such as Steve & Barry’s. Almost 60 percent of its space is vacant, according to recent figures from NorthMarq.

The following story headline masquerades as a local (D.C.) problem but the real story buried in the article is a few select quotes from Elizabeth Warren.

A mortgage crisis like the one that has devastated homeowners is enveloping the nation’s office and retail buildings, and few places are likely to be hit as hard as Washington.

The foreclosure wave is likely to swamp many smaller community banks across the country, and many well-known properties, including Washington’s Mayflower Hotel and the Boulevard at the Capital Centre in Largo, are at risk, industry analysts say.

“There’s been an enormous bubble in commercial real estate, and it has to come down,” said Elizabeth Warren, chairman of the Congressional Oversight Panel, the watchdog created by Congress to monitor the financial bailout. “There will be significant bankruptcies among developers and significant failures among community banks.”

In Washington, the office vacancy rate stopped ballooning in the fourth quarter of last year for the first time since the first quarter of 2006, according to CoStar, although largely for an unfortunate reason: The space was being filled mainly by office workers hired to handle the plethora of bankruptcy filings and “workouts” of borrowers who need to renegotiate bad debt.

Unlike residential mortgages, which often can be paid over 30 years, commercial real estate mortgages typically must be paid off or refinanced within five years. Commercial properties mortgaged in 2005, 2006 and 2007, at the height of the boom, are reaching their maturity date. “Do the math on this,” Warren said. “This is a significant problem.”

Do the Math Indeed

There is a strong potential to see a thousand commercial real estate bank failures in the next couple of years unless Congress acts to bail them out. Bernanke is unlikely to lift a finger as his concern is for the big boys, who he will support at any and all costs.

Of course no banks should be bailed out, and two wrongs do not make a right. Thus, the correct decision is to let failed banks fail. The last thing we need is further bank zombification.