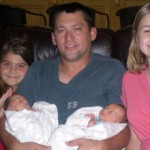 Whatever the delusions of war planners, the costs come home and disperse. We’re waging wars on different continents, but deadly echoes reverberate here. As Lt. Gen Gregory Newbold wrote in April 2006 of the Iraq War, the decision to invade “was done with a casualness and swagger that are the special province of those who have never had to execute these missions — or bury the results.”

Halimah Abdullah at McClatchy Newspapers has an important piece on burying.

WASHINGTON — Sgt. 1st Class Daniel Wimmer charmed potential Army recruits with a movie star’s smile, but somehow it never quite reached his eyes, even when he was cradling his newborn twin daughters.

Whenever he closed his eyes, he dreamed of his own dead body swinging from a rope, his feet dangling just above a chair.

When those nightmares eventually blurred, the Persian Gulf veteran and former Army recruiter began trying to recreate their grisly images. He tried to kill himself with pills in the woods, and a razor blade in a hotel room, and every suicide attempt drew his wife, Jennifer, and their four daughters deeper into his dark world.

Jennifer learned that his fourth suicide attempt, on July 23, had succeeded when she got a text message: You’ll ‘find his body hanging like a Christmas ornament from a tree across from the range on base. If he knew I was sending this he would be pissed. Hope you understand. Bob.’

Jennifer doesn’t know who ‘Bob’ is, and the military is preparing to close its investigation into his death pending more evidence.

So less than a year after Daniel Wimmer, five days short of his 34th birthday, drove his white Ford F-150 truck to nearby Fort Benning, a sprawling military installation near Columbus, Ga., and hanged himself from a tree across from a practice range, his family is still caught in the dark currents that took his life — a life they’re only just beginning to understand.

‘It’s like fighting the ocean with a teaspoon,’ said Jennifer, 42. ‘When I wake up, I ask myself, ‘Is it going to hurt today’?’ 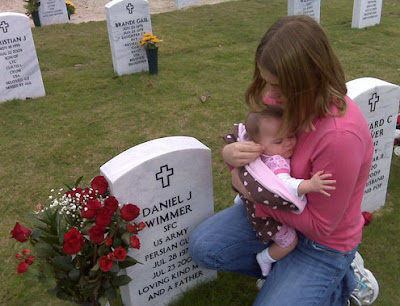 Last month, the Defense Department reported that there were 160 reported active-duty Army suicides in 2009, up from 140 in 2008. Of these, 114 have been confirmed, while the cause of death in the remaining 46 has yet to be determined.

While the military’s suicide rate is comparable to civilian rates, the increase is alarming because the armed services traditionally had lower suicide rates than the general population. The increase in military suicides includes men between the ages of 18-30, mid-career officers and, increasingly, women.

The numbers don’t tell the whole story. Long after the flag-draped coffins are lowered into the ground, families such as the Wimmers are left to measure their grief in a seemingly endless stretch of days marked by missed birthdays, anniversaries, weddings and babies’ first steps.

‘I think we need to realize that we have families that are under such great stress,’ Deborah Mullen, the wife of Adm. Michael Mullen, the chairman of the Joint Chiefs of Staff, told more than 1,000 military and federal health care workers at a suicide prevention conference in January. ‘This stress is only going to continue. We need to be able to give tools to family members who are left behind.’

Daniel’s depression consumed the loving husband and father his family once knew and left behind a despondent phantom. They met in 2007, and early on, Jennifer Wimmer felt him slipping away and tried desperately to hold on.

‘From the moment I met him, I knew he suffered from issues of depression,’ she said. ‘When I told him that he needed to get some help, he said, ‘I can’t do that. It will damage my career.’‘

Despite calls by top Pentagon officials for a sea change in attitudes about mental health, millions of dollars in new suicide prevention programming and thousands of hours spent helping soldiers suffering from what are euphemistically dubbed ‘invisible wounds,’ stereotypes about mental health still exist, and they complicate the military’s efforts to stem the rising tide of suicides.

Like other military families in Phenix City, Ala., a town of 30,000 near Fort Benning, love of country and a sense of honor and duty ran deep for the Wimmers. So Jennifer initially said nothing to Daniel’s commanding officers and resolved to keep the matter private, telling only his unit chaplain.

She’d known by their second date that they were destined to be together. She was charmed by his sweet half smile and by the sad brown eyes that seemed to match his humble disposition, and she vowed to watch for any signs of inner turmoil.

They dated for seven months and married in March 2008.

Things were good at first. They bought a new home on a quiet street in a subdivision where Daniel ran alongside the kids as they rode their bikes, and they had a large backyard where he goaded his stepdaughters into water balloon fights.

‘He was the best mentor to the kids and the greatest parent,’ Jennifer said. ‘I would listen to him talk, and they would hang on his every word.’

Even though he hated the long hours, he took a similarly fatherly role as a recruiter and later a drill sergeant, and he was immensely proud of the privates he’d recruited and the soldiers he’d trained.

Months before he committed suicide, though, the Wimmer family learned that he was being reassigned to Fort Carson, Colo.

‘When he realized that the one thing that gave him some pride was going to go away, he felt lost,’ his wife said.

Daniel Wimmer began taking long drives by himself at night, steering his truck across the Alabama-Georgia state line to the woods at Fort Benning’s edge. One morning in March, he returned home and told his wife that he’d been sitting in the woods all night, staring into the dark and swallowing a bottle of muscle relaxers.

He didn’t go to the hospital, and seemed fine physically, so the couple decided to keep the matter between them and the unit chaplain.

The next month, however, he tried to overdose again, this time with sleeping pills. Jennifer, by now six months pregnant with their twin daughters, said she packed him into the car and drove him to Martin Army Community Hospital in Fort Benning, where he was admitted for inpatient psychiatric care and given antidepressants.

His commanding officers were finally told that he suffered from depression.

‘He said that’s when he felt like he was spinning out of control,’ his wife said. ‘He would tell me he saw dead people walking around. He told me that every time he closed his eyes, he saw himself hanging above a chair.’

Jennifer struggled to maintain some semblance of normalcy for the girls. In between treks to Atlanta to see an obstetrician-gynecologist who specializes in high-risk pregnancies, she shuttled the girls to school, helped them with their homework and reassured them that daddy was just going through a rough patch, but would soon be back with them.

In May, though, he disappeared again, and tried to kill himself with more sleeping pills. Jennifer said that she got into a car accident while she was trying to find him.

‘They thought I was going to deliver the babies’ after the accident, she said. ‘I was in the hospital overnight, and he stayed with me.’

The next day, though, Daniel didn’t go to work, and he never came back to the hospital. After she was discharged, Jennifer said, she checked the online credit card statement, and he’d checked himself into a hotel in Hogansville, Ga., an hour away from their house.

She said that she and a chaplain sped over to the hotel. Wimmer stumbled into the room with blood on his wrists.

He refused to go back to the hospital, and the next day his commanding officers met with the couple to talk about Wimmer’s rapidly deteriorating mental health. He was advised to take a month off and seek additional counseling.

‘Our relationship was tense because I didn’t know what to do to help him,’ his wife said, adding that she asked herself every day, ‘Do I leave, or do I stay? It was a very bad place for me, too. It was like walking on eggshells. If I was the cause of him losing his position, what would that mean for me? Then I thought, am I the meddling wife?’

The Wimmers’ twin girls arrived amid this upheaval and uncertainty. They were dark-haired darlings who, for a while at least, seemed to quell their father’s inner rage. He wrote them a letter saying, ‘I daydream every day of the great wonderful women you will grow up to be. I just pray that I will be a good father and role model for you to follow.’

That same week, he also wrote of his growing disillusionment with military service.

‘I no longer believe in the cause. We preach that soldiers protect our way of life and our freedoms, but is it really? I now feel all soldiers are in pons (sic) ready to die to make the poloticans (sic) rich.’

Then he sped off into the night.

Daniel Wimmer’s suicide ripped a hole in the gossamer fabric of his family’s life. His wife used to sit in his truck for hours, inhaling his fresh-out-of-the-shower scent, which still lingered on the seats. She finally sold the truck, no longer able to bear the reminder of how it often spirited him away from her.

His oldest daughter Sara, 15, puts on a brave front and tries to help her mother with the younger children. His middle daughter, 8-year-old Alexandra, is angry and often sleeps with his shirt at night to console herself and writes poetry and songs about her dad.

‘As long as a soldier does his job, everything is good, then when something like this happens the family is chastised, too, and it’s like, ‘Well, what did she do? How could she have prevented this? Spouses are looked at very harshly,’ Jennifer Wimmer said.

‘It hurts me more because I was so proud to be married to my husband, and he was such a dedicated, decorated soldier. I still believe in our Army, our military. But it hurts.’