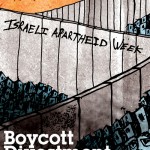 The contortions and lies in the glorification of Israeli militarism by American neocons should not shock us.

Yet, the latest pathetic column by neocon Richard Cohen startles the rationally inclined. There’s something about the self-conscious lie for which we ought never not lose our indignation. Great liars are indeed also great magicians, a serious problem when lives are at stake.

Cohen today denies that Israel subjects Palestinians, “Arabs”, to apartheid conditions. There is no domination of an ethnically isolated, impoverished and imprisoned group of people, no imposed  “fragmentation of the residue of Palestine” no prison-like conditions of Gaza certainly, no siege, no state terror, and no apartheid bantustan prison enclaves, Cohen assures us. Cohen is careful not to use the word “bantustan” or “Gaza.” And Cohen is equally careful to use the smear: Anti-Semitic. “(A)nti-Semitism is not so easily dismissed with others. This is ‘Israeli Apartheid Week‘ on campuses across the world, and it is clear that what furiously animates many of the protesters are not legitimate grievances but imaginary ones,” writes Cohen.

For some facts and real analysis, Americans should see the video below of Noam Chomsky after the Gaza massacre, it really happened. And Glenn Greenwald sets the record straight.

Dredging up the Israel/apartheid question
By Glenn Greenwald
(updated below)

In addition to everything else they are, the scribblings on The Washington Post Op-Ed Page are often wildly out of touch.  They often have the feel of having been written a decade ago, stuffed under a mattress somewhere, and then arbitrarily hauled out and dusted off for publication.  With seemingly no trigger, Richard Cohen woke up today and decided to write about a long-standing though not particularly relevant (and largely semantic) controversy:   whether the word “apartheid” is properly applied to Israel due to its control of the West Bank and Gaza, whose non-Jewish residents have no democratic rights in the country that rules over their land.  Cohen, for whatever reasons, focuses on Jimmy Carter’s use of the word in his book from four years ago, and takes the standard, predictable position:  the term is false, deliberately inflammatory, and often the by-product of anti-semitism, etc. etc.  But in dredging up this debate, Cohen completely omits a very recent, highly significant event:  the use of the term by Israel’s own hawkish Defense Minister, Ehud Barak, just four weeks ago:

Israel’s defense minister warned Tuesday that if Israel does not achieve a peace deal with the Palestinians, it will be either a binational state or an undemocratic apartheid state. . . .
“The simple truth is, if there is one state” including Israel, the West Bank and Gaza, “it will have to be either binational or undemocratic. . . . if this bloc of millions of Palestinians cannot vote, that will be an apartheid state.”

Writing about the Israel/apartheid controversy without mentioning Barak’s recent statement would be like writing a column about the Senate reconciliation process without mentioning health care, or writing about the U.S. military’s counter-insurgency doctrine without mentioning Afghanistan.  But Cohen’s glaring omission is understandable:  there has been an intense campaign to demonize those who analogize Israel’s treatment of the Palestinians to apartheid (as Carter did, in the same way as Barak).  That demonization campaign becomes impossible if Israel’s own Defense Minister makes exactly the same point.  So Cohen just shuts his eyes tightly and pretends the whole thing never happened.  Beyond that, Barak’s willingness to explicitly raise the comparison that is all but off-limits in American political discussion once again illustrates the bizarre fact that debates over Israeli policies are far more permissive and open in Israel than they are in the United States.

Israel’s prime minister issued a rare warning yesterday that his nation risked being compared to apartheid-era South Africa if it failed to agree an independent state for the Palestinians. In an interview with the Israeli newspaper Ha’aretz, Ehud Olmert said Israel was ‘finished’ if it forced the Palestinians into a struggle for equal rights.

If the two-state solution collapsed, he said, Israel would ‘face a South African-style struggle for equal voting rights, and as soon as that happens, the state of Israel is finished’ . . . .

It is not the first time that Olmert has risked the South African comparison. Four years ago, in another interview with Ha’aretz, he gave a similar warning.

As Matt Duss asks, quoting Cohen’s column of today:  ‘Does Richard Cohen think Olmert & Barak were also ”waving the bloody shirt of racism” when they warned of apartheid?’