In association with the National Coalition Against Domestic Violence

I promised a companion article to Dogs for Vets: a great idea, but screening Vets for Pets is also important that would stress the importance of ensuring anyone, not only combat Veterans, who is considering getting such a trained animal must be screened.

It has taken a while to put this story together, because just going through the images was heartbreaking if one is a dog lover.  I’ve used only two such images to make points, and these are the least offensive. The problem is THAT BAD.

I also feel it important that Veterans be screened before getting such animals based on personal experience. While observing a PTSD rap session at the Dayton VAMC, one Vet brought his companion dog in to be a sort of break the ice  with the group that I found commendable, however another Vet talked about how he still enjoyed killing small animals in his backyard. This guy was wheelchair bound and that angry still – he was a Vietnam Vet.

Before what I said gets twisted into a swift boat attack on me saying all Disabled Vietnam Vets still get a thrill out of killing things THAT is not what I’m saying. One Vet whom I witnessed say he liked killing small animals needs more help than any PTSD rap session is going to give him or her.

What I am saying is that the last person I would give a rescue or companion dog is to someone who tells a group of people publicly that they still get a thrill out of killing small animals. THAT is why anyone with anger issues must think twice, no ten times, to ensure WE get those anger issues under control BEFORE seeking or getting a dog of any kind. THAT is why it is extremely important that everyone be screened BEFORE getting such an animal, especially if the dog is trained – most organizations do just that given the cost involved.

I also got the idea for this article from a brochure that I picked up from of all places the Wright-Patterson AFB Mental Health Clinic. The brochure was titled, “VICTIMS without VOICE: Animal Abuse and Family Violence.”

Readers if the incidents of animal abuse related to domestic violence within the military community were not a problem that brochure would never have been in a military mental health facility.

Once again I want to stress that this article IS NOT solely directed at Veterans or Military Families, but reflects facts within our American society as a whole. That said, we Veterans, Troops, and Military Families are but a reflection of the overall society that we serve and defend.

The bulk of this information comes from the American Humane Society.

VICTIMS without VOICE: Why it Matters

Anti-cruelty laws exist in all U.S. states and territories to prohibit unnecessary killing, mutilating, torturing, beating, neglecting and abandoning animals, or depriving them of proper food, water or shelter. Animal cruelty cases may be investigated by a local humane society, SPCA or animal control agency or, in areas where these organizations are not present, by police or sheriff’s departments. When an investigation uncovers enough evidence to warrant prosecution, charges may be filed by the local district or state’s attorney. Often, only the most serious cases generate sufficient sympathy and evidence to warrant prosecution, and gaining convictions may be very difficult. [16,17]

If You Need Help

Contact your local humane society, SPCA, animal control agency, or veterinarian to see if they have temporary foster care facilities for pets belonging to battered women.

What You Can Do

What Advocates Can Do For Battered Women With Pets

For a bibliography of “Link” materials: please see www.animaltherapy.net/Bibliography-Link.html

[8] Loar, L. (1999). “I’ll only help you if you have two legs,” or, Why human services professionals should pay attention to cases involving cruelty to animals. In, Ascione, F.R. & Arkow, P., eds.: Child Abuse, Domestic Violence, and Animal Abuse: Linking the Circles of Compassion for Prevention and Intervention. West Lafayette, IN: Purdue University Press, 1999, pp. 120-136.

[14] Melson, G.F. (2001). Why the Wild Things Are: Animals in the Lives of Children. Cambridge: Harvard University Press.

Understanding The Link® Between Animal Abuse and Family Violence 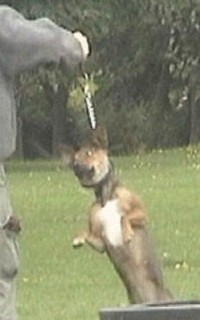 A correlation between animal abuse, family violence and other forms of community violence has been established. Child and animal protection professionals have recognized this link, noting that abuse of both children and animals is connected in a self-perpetuating cycle of violence. When animals in a home are abused or neglected, it is a warning sign that others in the household may not be safe. In addition, children who witness animal abuse are at a greater risk of becoming abusers themselves.

Simply put the image at right IS NOT how a dog is trained to assist or love anyone. If readers notice any animal being treated this way by yanking them off the ground by a chain or collar THAT IS NOT TRAINING.

How Serious Is It?

A survey of pet-owning families with substantiated child abuse and neglect found that animals were abused in 88 percent of homes where child physical abuse was present (DeViney, Dickert, & Lockwood, 1983). A study of women seeking shelter at a safe house showed that 71 percent of those having pets affirmed that their partner had threatened, hurt or killed their companion animals, and 32 percent of mothers reported that their children had hurt or killed their pets (Ascione, 1998). Still another study showed that violent offenders incarcerated in a maximumsecurity prison were significantly more likely than nonviolent offenders to have committed childhood acts of cruelty toward pets (Merz-Perez, Heide, & Silverman, 2001).

In many communities, human services, animal services and law enforcement agencies are sharing resources and expertise to address violence. Professionals are beginning to engage in crosstraining and cross-reporting through inter-agency partnerships. Humane societies are also teaming with domestic violence shelters to provide emergency shelter for pets of domestic violence victims. In addition, some states have strengthened their animal-cruelty legislation and taken other measures to address The Link. These state-level actions permit earlier intervention and send a clear message that all forms of violence are taken seriously. For example:

Where Does American Humane Stand?

American Humane asserts that The Link must be addressed and the following provisions must be implemented:

American Humane’s National Resource Center on the Link. www.americanhumane.org/link or (800) 227-4645.