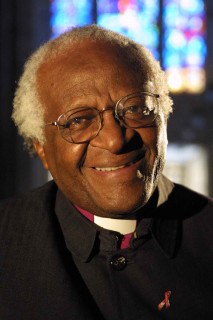 Famed anti-apartheid activist and Nobel Peace Prize recipient, Desmond Tutu, blasts the anti-gay hatred sweeping the continent of Africa. Writes Tutu in the Washington Post: “The wave of hate must stop. Politicians who profit from exploiting this hate, from fanning it, must not be tempted by this easy way to profit from fear and misunderstanding. And my fellow clerics, of all faiths, must stand up for the principles of universal dignity and fellowship. Exclusion is never the way forward on our shared paths to freedom and justice.”

Tutu’s comments could just as well have been applied to the United States from which much anti-gay hatred is being spread to the world by fundamentalist Christians like The Family.

In Africa, a step backward on human rights

Hate has no place in the house of God. No one should be excluded from our love, our compassion or our concern because of race or gender, faith or ethnicity — or because of their sexual orientation. Nor should anyone be excluded from health care on any of these grounds. In my country of South Africa, we struggled for years against the evil system of apartheid that divided human beings, children of the same God, by racial classification and then denied many of them fundamental human rights. We knew this was wrong. Thankfully, the world supported us in our struggle for freedom and dignity.

It is time to stand up against another wrong.

Gay, lesbian, bisexual and transgendered people are part of so many families. They are part of the human family. They are part of God’s family. And of course they are part of the African family. But a wave of hate is spreading across my beloved continent. People are again being denied their fundamental rights and freedoms. Men have been falsely charged and imprisoned in Senegal, and health services for these men and their community have suffered. In Malawi, men have been jailed and humiliated for expressing their partnerships with other men. Just this month, mobs in Mtwapa Township, Kenya, attacked men they suspected of being gay. Kenyan religious leaders, I am ashamed to say, threatened an HIV clinic there for providing counseling services to all members of that community, because the clerics wanted gay men excluded.

Uganda’s parliament is debating legislation that would make homosexuality punishable by life imprisonment, and more discriminatory legislation has been debated in Rwanda and Burundi.

These are terrible backward steps for human rights in Africa.

Our lesbian and gay brothers and sisters across Africa are living in fear.

And they are living in hiding — away from care, away from the protection the state should offer to every citizen and away from health care in the AIDS era, when all of us, especially Africans, need access to essential HIV services. That this pandering to intolerance is being done by politicians looking for scapegoats for their failures is not surprising. But it is a great wrong. An even larger offense is that it is being done in the name of God. Show me where Christ said “Love thy fellow man, except for the gay ones.” Gay people, too, are made in my God’s image. I would never worship a homophobic God.

“But they are sinners,” I can hear the preachers and politicians say. “They are choosing a life of sin for which they must be punished.” My scientist and medical friends have shared with me a reality that so many gay people have confirmed, I now know it in my heart to be true. No one chooses to be gay. Sexual orientation, like skin color, is another feature of our diversity as a human family. Isn’t it amazing that we are all made in God’s image, and yet there is so much diversity among his people? Does God love his dark- or his light-skinned children less? The brave more than the timid? And does any of us know the mind of God so well that we can decide for him who is included, and who is excluded, from the circle of his love?

The wave of hate must stop. Politicians who profit from exploiting this hate, from fanning it, must not be tempted by this easy way to profit from fear and misunderstanding. And my fellow clerics, of all faiths, must stand up for the principles of universal dignity and fellowship. Exclusion is never the way forward on our shared paths to freedom and justice.

The writer is archbishop emeritus of Cape Town, South Africa. He won the Nobel Peace Prize in 1984.