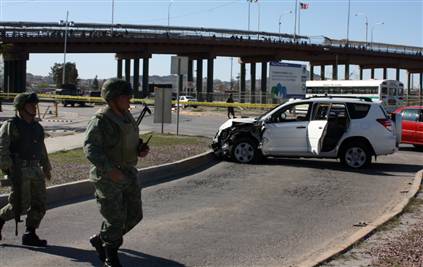 Our Drug Habit Causing War on Both Sides of the Border

The slayings came amid a surge in bloodshed along Mexico’s border with Texas and drew condemnation from the White House. Mexico’s president expressed outrage and promised a fast investigation to find those responsible.

Authorities put suspicion on members of a gang of hitmen allied with the Juarez drug cartel. That theory is based on “information exchanged with U.S. federal agencies” helping in the investigation, according to a statement Sunday from the joint mission of soldiers and federal police overseeing security in Ciudad Juarez.

Violence has exploded in recent months in Ciudad Juarez as the head of the Juarez cartel, Vicente Carrillo Fuentes, fights off a bloody offensive by Mexico’s No. 1 fugitive drug lord, Joaquin “Shorty” Guzman, at the worst hotspot of Mexico’s three-year-old drug war.

While putting the blame on the drug gang, police offered no information on a possible motive in the slayings. U.S. State Department spokesman Fred Lash said only that the three dead people were at the same party before the attacks that occurred minutes apart Saturday afternoon.

The Americans were identified as consular employee Lesley A. Enriquez, 35, and her husband, Arthur H. Redelfs, 34, by Robert Cason, Redelfs’ stepfather. Redelfs was a detention officer at the El Paso County Jail, he said.

The woman was shot in the head, while her husband suffered wounds in his neck and arm. Their baby was found unharmed in the back seat.

Cason declined to discuss the welfare of his grandchild. “I don’t want to give any more information to the psychotics out there,” he said.

This latest incidents highlights the urgent need for us to stop ignoring our neighborhood.

We either need to contribute hundreds of thousands of troops to this drug war and secure U.S. interests while contributing to Mexico’s success or we need to legalize drugs, regulate, and get our childrens off the streets.

The latter would be the more effective and less costly as it requires the stroke a lawmakers pen and not trillions of drug war fighting warriors and equipment.

In one day, we can put all Mexican drug dealers out of business.  This would help Mexico immediatley by putting the black market out into the open.  Because the drug trade in Mexico is important to the underground economy, at first, it would be job loss endeavor in Mexico but I very am sure it would be job loss that Mexico and it’s people would gladly accept as these target mafia killings would end because there would be no markets to fight over.

As for the U.S., our drug habit is a medical addiction problem that must be taken off the covert streets and out into the light.  We can’t ignore that we have addicts among us and it’s causing harm to us and our neighbors.

Legalize it, regulate it, control it, educate, and give empathy to addicts not jail sentances.