Many insist that it’s their culinary heritage, but others are calling it blarney

In third grade, my teacher announced that we would be celebrating St. Patrick’s Day by wearing green hats and giving ourselves fake Irish names. And so was born that great 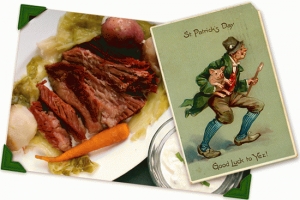 Celtic patriot Francis McLam, and next to me was the even-more-improbable sounding Mike O’Gotkowski. Our friend Michael O’Reilly was now — in the face of all this Irishness — no longer sufficiently Irish, and so he became Michael McO’Reilly.

It was my first inkling of how strange Americans are about traditions on St. Patrick’s Day, a feeling reinforced years later by watching people of all races and ethnicities pretend at Irishness by getting plowed on green beer and painting themselves like leprechauns. But despite all this, maybe the most straightforward of St. Patrick’s Day celebrations, eating the corned beef and cabbage, is secretly one of the strangest.

“My Irish family never ate corned beef,” the letter began. I’d just written a story about new immigrants in Queens, called “Where Curry Replaced Corned Beef and Cabbage,” and a reader was gently protesting my mention of that stereotypical dish.

“My grandmother was perplexed that Americans associate corned beef with being Irish. In Ireland, most people ate pig. Lots of bacon, lots of sausage (lots of trichinosis).

…Corned beef was made popular in New York bars at lunchtime. The bars offered a ‘free lunch’ to the Irish construction workers who were building NYC in the early part of the 20th century. But there’s no such thing as a free lunch. You had to buy a couple of beers or shots of whiskey to get that free lunch. And that’s how corned beef became known as an ‘Irish’ food. My grandmother hated the stuff and wouldn’t allow it in her home. I myself first tasted corned beef when I was in my thirties at some non-Irish-American person’s ‘St. Paddy’s Day’ party.”

Dismayed, I sent that letter to a friend from Dublin. “Every word of that post is pure gospel,” she wrote back. “We NEVER eat corned beef and cabbage. We mock Americans and their bizarre love of that ‘meat’.”